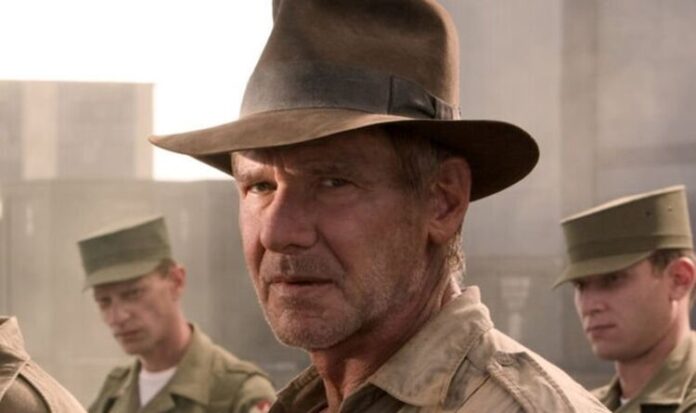 Harrison Ford‘s iconic cinematic character Indiana Jones has gotten through countless attacks and traps throughout the years. In the first film, The Raiders of the Lost Ark, one of the earliest scenes showed him running away from a boulder with a mind of its own. The same film also showed him surviving the wrath of God when the Ark of the Covenant was opened in his presence. And it didn’t stop there, either.

In the Temple of Doom Indy was possessed by a demon and almost killed his little buddy, Short Round. But the power of love (and a good bonk on the head) brought him back to the realm of the living.

However it is the third film in the franchise, The Last Crusade, that fans think Indy may have gained the power to survive the Crystal Skull’s nuclear blast. Fans will recall Indy stumbled upon a remote town in the events of Crystal Skull just moments before realising it was being used as a test site for nuclear arms.

In a desperate attempt to survive, Indy decided to jump inside a fridge that was, conveniently, lead-lined. The kitchen appliance was then launched out of the fake and out of harm’s way with Indy in it. But fans on Reddit have suggested that this was actually an act of grace, rather than a display of wits.

If this is the case, Indy’s incredible luck and aversion to death could have actually been all a result of his Holy Grail encounter.

Indy’s apparent Holy Grail powers may even be addressed in the upcoming fifth film of the series. Although Indiana Jones 5’s plot has not yet been detailed, it has been revealed it will close out Ford’s version of the character once and for all. And the film has a collection of new actors in the series to carry it on if the desire was there.

Most notably, Phoebe Waller-Bridge is making her debut in the series. Again, her role has not officially been announced just yet. But, considering the story will likely be continued into the future, she could be playing Indy’s long-lost daughter.