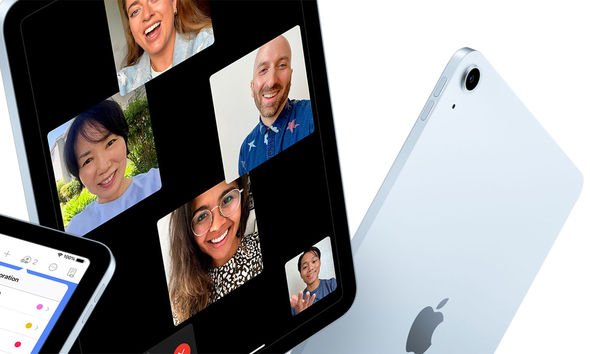 When the latest iPad Air was announced it looked like one of the most exciting upgrades in years. Having had one in hands for the past week, we can safely say that it’s as good as we were hoping for. The current iPad Air, last refreshed back in March 2019, is starting to look more than a little tired and this upgrade has breathed some much-needed life back into this hugely popular tablet. From the moment you remove it from the box, you’ll be struck by the Air’s stunning new aluminium finish and 10.9-inch screen that now inches closer to the edges of the metal case.

That’s right, Apple has finally banished those chunky bezels to the history books on the new iPad Air model and our only annoyance is that it’s taken them this long to do it.

Hit the power button, which also now acts as a super-fast way of unlocking the tablet, and you’ll be treated to a glorious Liquid Retina touchscreen display, which is perfect for a nightly Netflix binge, quick game on Apple Arcade, internet shopping, or clearing out your inbox. Everything is sharp, bright and colourful and the touchscreen feels responsive – with just enough of a border around the edge that you won’t accidentally delete the wrong email while gripping the tablet.

Helping to boost the visual experience even further is Apple’s True Tone technology, which adapts the colour temperature of the screen depending on the conditions of the room you’re in. There’s also an excellent antireflective screen coating which makes it perfect to use both inside and out in autumn sunshine.

By pushing the screen to edge, Apple has been able to create a larger viewing area whilst keeping the overall footprint pretty small and relatively light. In fact, the iPad Air weighs in at under 500g and is also only 6.1mm thick, which makes supremely portable for the daily commute.

Removing the chunky borders around the display found on the previous iPad Air meant Apple had to drop the circular Home Button. As a compromise, the US firm has popped its speedy fingerprint scanner into the power button on the top of the tablet. We prefer this way of unlocking the iPad Air compared with the Face ID facial recognition found on the iPad Pro as we often find ourselves covering the camera with our hands when holding this pricier tablet in landscape orientation.

The iPad is unlocked via a Touch ID scanner on the top of the device (Image: APPLE)

The fact that many of us are currently wearing masks when out and about also gives the new iPad Air a distinct advantage as Face ID doesn’t play ball when you’re cover your nose and mouth.

Spin the iPad Air around and you’ll find a sleek aluminium finish, which comes in a number of new colours, including a subtle Green, Blue and Rose Gold. We took delivery of the Green model for our review and it looks magnificent.

In the top left-hand corner, there’s a solid 12MP camera, which is perfect if you want to snap a quick photo for the family album. This lens can also shoot video in 4K as well as Slo-Mo too. Apple also lets you take panorama photos with the camera, but there’s no support for those DLSR-style Portrait Mode shots or clever Night Mode found on recent iPhones.

On the front, there’s Apple’s 7MP FaceTime HD camera, which won’t let you down when making the weekly FaceTime calls to friends and family – something we’re all doing more of in these strange times.

The Apple iPad Air comes in a number of subtle colours (Image: APPLE)

This selfie snapper can record in 1080p High Definition and also offers improved low-light performance which is a nice addition to this tablet.

So, that’s the outside but what’s going on under the hood? The answer to that question is “a lot”. This is the first tablet to boast Apple’s new A14 Bionic processor which, in theory, should make it faster than the iPad Pro – even the model that launched a few months ago!

We’ve been using the new iPad Air for all the usual tasks, like watching movies, playing games, surfing the web and there’s no question this lightweight device will not be fazed by anything. Switching between an array of apps, or opening dozens and dozens of web browser tabs won’t cause any issues – even the most memory-hungry video games or 4K video edits happen without a hint stutter.

But it’s not all about speed. Apple’s all-new A14 Bionic chipset is also very efficient and, when we all get in the air again, it will have no problem powering you through your next long-haul flight. Apple is confident iPad Air will keep going for around 10 hours on a single charge and our tests have shown that seems pretty accurate. We haven’t tested the cellular model when away from Wi-Fi just yet, so it’s possible using the iPad Air on 4G all-day will result in faster battery drain.

The Magic Keyboard is compatible with the Air (Image: APPLE)

When things do run low, you’ll find a charging cable and 20W plug in the box, which is a bonus considering Apple has ditched the power pack from all of its iPhones. It’s also worth remembering that the iPad Air now comes with a USB-C port too, which means you can use your MacBook, or Nintendo Switch charger to refill the battery at much quicker speeds.

Other features worth a mention include decent dual stereo speakers, fast Wi-Fi 6 connection and, like all iPad models, you can buy the Air with in-built 4G cellular connectivity. This new tablet is also compatible with Apple’s brilliant Magic Keyboard, which offers an almost laptop-like experience via its trackpad and backlit keyboard.

You can read our full Magic Keyboard review here, but it’s worth investing in if you’re planning on using the Air as a mini laptop replacement.

The latest Apple Pencil also works with the Air and snaps to the top of the case to keep it safe and wirelessly refill the battery, which is much better than the first generation, which had to be plugged into the Lightning port when it ran low on power.

All in all, there really isn’t anything drastically wrong the iPad Air. That said, we do have a couple of tiny niggles.

The iPad Air gets a stunning new design (Image: APPLE)

Unlike the new iPhones, there’s no sign of 5G data speeds on this new tablet, which is a real shame for those wanting to use the iPad Air on the move.

You also won’t find a 120Hz refresh-rate screen, which Apple calls ProMotion, on the redesigned iPad Air. For that, you’ll need to spend a little more to buy the iPad Pro. This display does make a pretty sizeable difference, offering silky smooth animations as you scroll around the web or whizz through your inbox. It also results in lower latency when using the Apple Pencil, so budding illustrators or animators will want to plump for the iPad Pro over the new Air.

And finally, there’s the price.

The new iPad Air starts from £579, but that only includes a pretty measly 64GB of internal storage. Apple isn’t selling a 128GB variant, which means you’ll have to jump to the 256GB configuration if you want more space for your 4K videos, documents, photo library and apps.

The 256GB model will cost you £729 …but things don’t stop there. Add cellular connectivity and you’ll need £859 in your bank account. And of course, that price doesn’t even include the Magic Keyboard case (£299) or the Apple Pencil (£119) …so you could end up with a bill of over £1,200 for owning one of these new tablets. Ouch!

If the price hasn’t put you off, then you’re in for a treat. The all-new iPad Air is easily our favourite tablet in Apple’s expansive range – it’s the most powerful iPad money can buy, it has a fabulous edge-to-edge screen, stunning new colours, and works with the best Apple accessories.

While it’s not cheap, it is cheaper than the iPad Pro. And that’s despite it sharing many of the same features.

Apple’s iPad Air has been in desperate need of a reboot for some time and this latest update is exactly what we were hoping for. The iPad Air is well and truly back and you shouldn’t consider buying any other tablet.

Google Maps down: Popular service not working on iPhone or Android

A discount that Dyson can’t match! Get £200 off Samsung’s clever...