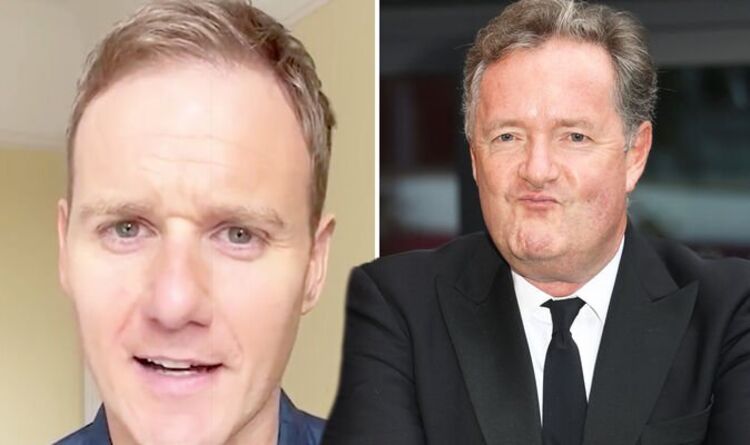 Former Good Morning Britain star Piers Morgan is making his return to screens this month as the face of new channel, TalkTV. Hosting his own primetime evening show, Uncensored, this will be Piers’ first role on the small screen since he departed the ITV breakfast show last year for refusing to apologise for comments made against Meghan Markle on air. Discussing the new move to press ahead of its debut on April 25, Piers was asked about who he sees as his new rival given his long-running feud and ratings war with BBC Breakfast star Dan Walker – and he wasted no time in mocking his fellow broadcaster.

Dan and Piers are no strangers to battling it out for ratings on screens via ITV and BBC for years – as well as exchanging one or two unsavoury tweets in the past.

But with Dan poised to join Channel 5 News in the coming weeks while Piers takes up his spot on TalkTV, the former GMB star poked fun at his decision to leave the BBC.

“Dan who?” Piers responded when he was asked about any potential rivals to his new show similar to his public spat with Dan.

And he didn’t stop there as he jibed: “Hasn’t he gone to Channel 5 or something?

READ MORE: Piers Morgan ‘struggling’ on how Boris Johnson can survive after fine

“He’s disappeared with his tail in his legs after we beat them in the ratings.”

Referring to his final appearance on GMB in which it finally overtook BBC Breakfast in the ratings, he went on: “It’s actually quite priceless as we beat the BBC on my last day,

“So he could never do anything about it or beat us again,” he laughed.

“Anyway, best wishes to Dan. I hope he enjoys Channel 5,” Piers added – but he still had room for one more swipe at Dan’s decision.

Praising the upcoming station, he went on: “When people see the scale of it, the tech and the amazing production behind all of it, the investment from the company, the support from Rupert Murdoch… (it) has been incredible.

“We’ve got all the tools to have a brand new show airing in three continents every day where it will be my take on the world.

“Once it beds down, it will resonate with people and hopefully become known as the place where we cancel cancel culture and support free speech and we have a bit of fun.”

While Dan’s debut date on Channel 5 remains under wraps, Piers will lead the charge when TalkTV launches on April 25.

His new show Uncensored “will be a lot like Good Morning Britain was before the censorship kicked in” Piers teased at the Q&A.

Adding what fans can expect, he went on: “If you liked me on Good Morning Britain, you’re going to like me on Piers Morgan Uncensored because I thought I was uncensored there for five years.

“Suddenly I discovered I wasn’t. We will be unfiltered, uncensored, unrestricted.”