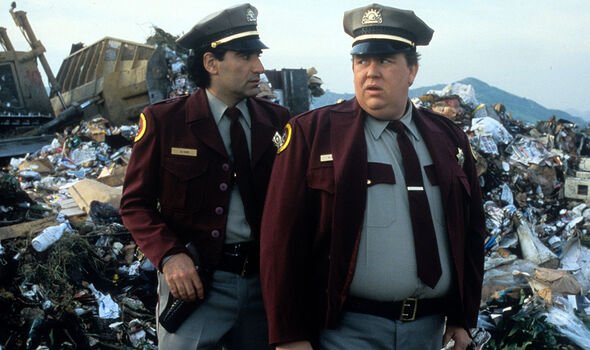 Buck Russell is a fun-loving bachelor without a care in the world — he’s also the world’s greatest slob. When he is asked to look after his sharp young nephew and nieces while their parents are away, anything can — and will — happen. Uncle Buck is a favourite classic flick among Britons and Americans alike, and hits TV screens this afternoon.

Candy was already an established actor at the time of filming Uncle Buck, but the film only further cemented his name entering the annals of Hollywood history.

He had a family history of heart attacks, and was known to have struggled with leading an unhealthy lifestyle: he was obese, heavily consumed alcohol and smoked a pack of cigarettes a day.

In Hollywood, the Canadian was a much-loved figure, with stars rarely having a bad word to say about him.

Hollywood: A lucrative career, he won a number of awards during his time in Hollywood (Image: GETTY)

In 2016, some of the cast of Uncle Buck spoke to Vanity Fair about Candy, remembering the legend that had touched their lives.

Amy Madigan, who played Chanice Kobolowski, Buck’s girlfriend, said Candy was “just an incredibly generous person,” adding that his good nature was equal to none.

“He treated everybody so equitably and was just such a cool person.

“He was just that guy that you wanted him to be.

“He would really work with you to figure out what you needed and wanted as an actor — which is what you hope that actors do, but oftentimes they don’t.

“We went out to dinner a bunch of times and I got to know him and know his family a little bit.

“It was really a pretty great experience.”

JUST IN: Why is The Last Kingdom ending after season 5? Boss speaks out

Film: On set with Tom Hanks and Rita Wilson for the film, Volunteers (Image: GETTY)

Madigan had not met Candy before the filming of Uncle Buck, but had heard of his stellar reputation as a jokester and all-round nice guy.

She added: “We just kind of hit it off. We had a great time.

“He was the king of ad libs. He and John Hughes [Uncle Buck’s director] had worked together before, so they had a really neat shorthand.

“It was sometimes all I could do to keep a straight face since he was just so hilarious.

“You would be doing a closeup, so the other actors are off camera, and he would just throw this stuff at you to crack you up.”

Uncle Buck: Candy seen in one of the film’s first scenes when he introduces himself to the kids (Image: Youtube/Movie Clips)

Amy Madigan: She described Candy as ‘just that guy you wanted him to be’ (Image: GETTY)

Jean Louisa Kelly, who played Buck’s niece, said Candy was a “warm person” and helped her in what was her first-ever film, after only having auditioned for roles on community TV previously.

She was just 16 when meeting Candy, and said: “I don’t really remember the first time that I met him, but I do know that I felt very comfortable with him.

“He was obviously hilariously funny.

“He was a very warm person and the thing that lent itself to our chemistry was the fact that we were improv-ing quite a bit.

“Now I know how rare that is. John Hughes really just let John Candy take the ball and go with it through a lot of the movie.

“Particularly in the scene where we’re in the bowling alley and we’re sitting there talking to each other, he was sort of throwing stuff at me, and I was just responding to it like the unpleasant person that I was.”

She laughed, adding: “I don’t really know that you can write that stuff and get the same kind of organic authenticity that you would get when you’re just responding with lines.”

Candy was brought up in a working-class family in Ontario, Canada.

His father sadly died aged 35 in 1955 from complications of heart disease when Candy was just five years old.

History: Candy pictured on the set of Armed and Dangerous, 1986 (Image: GETTY)

He initially wanted to be a football player long before considering becoming an actor, but a knee injury prevented him from playing and effectively ended his dream.

He enrolled in Centennial College in Toronto to study journalism, and later went to McMaster University where he started acting — and the rest is history.