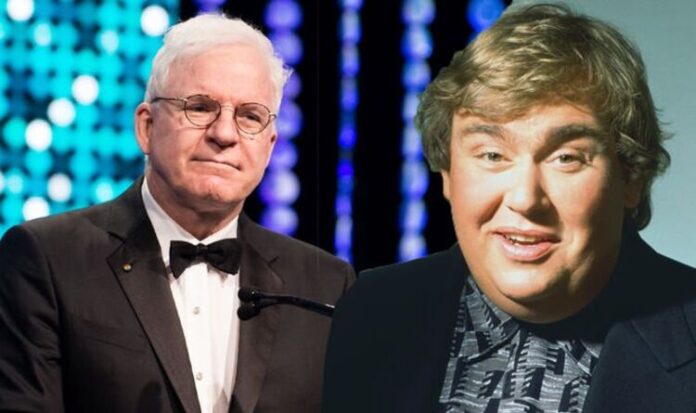 Candy was best known for playing the loveable oaf in a number of iconic films, including Uncle Buck, Cool Runnings, The Great Outdoors and Planes, Trains and Automobiles. During the shooting of the latter, Candy worked closely with Martin on creating a hilarious film that included an emotional sucker punch at the end.

Writer and director John Hughes made it so that Candy’s character, Del Griffith, was hiding a dark secret in his past. Although the character had been talking about his wife for the entire film, it was revealed his wife had been dead all along, and he was struggling to get over it.

In the book “Wild and Crazy Guys: How the Comedy Mavericks of the ’80s Changed Hollywood Forever” author Nick de Semlyen explored some of the behind-the-scenes magic of Planes, Trains and Automobiles. He revealed that one of the final emotional scenes was completely ad-libbed by Candy.

And in one final tearjerking moment, Candy’s character revealed the death of his wife, before adding the last touch: “But this time I couldn’t let go.”

This final line from Candy was apparently an emotional trigger for Martin. Semlyen noted how Candy and Martin were extremely good friends at the time and had a great time working together on the film. But just seven years after Planes, Trains and Automobiles was made, Candy died of a heart attack, aged just 43-years-old, in 1994.

Years later, Martin was quick to praise his on-and-off-screen friend.

Semlyen said in his book: “Between takes, Candy would crack up Martin by pretending to act out a cheesy gladiator movie, moving his lips in a way that made it sound like he was dubbed.”

This isn’t the only example of Candy being a lighthearted person while on set. During the filming of Uncle Buck he gave her a surprise birthday party in the middle of the shoot.

Kelly remembered Hughes and Candy got her a birthday cake for her 17th birthday. They had it decorated with lyrics from a song by The Beatles that read: “She was just 17.”

Candy went one step further, however. Kelly said: “John Candy gave me a Hard Rock Café jacket, which was awesome because I was really from a very rural, small town and it seemed so exciting to me. I think my mom still has that jacket.”

Planes, Trains and Automobiles is available to stream on Netflix.

Uncle Buck is available to rent on Amazon Prime Video.