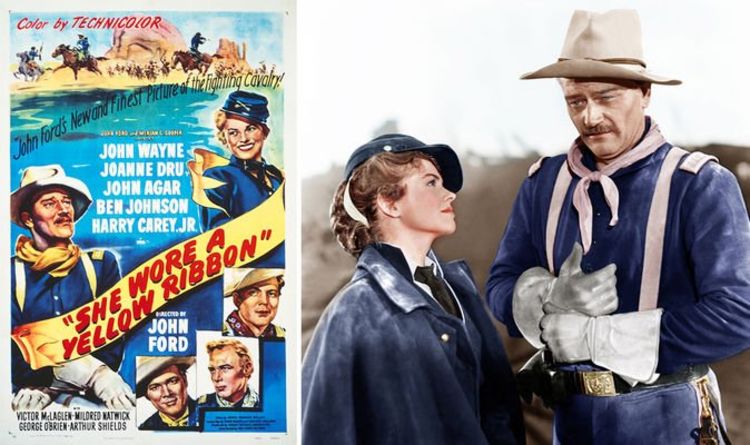 Having starred in the first outing of John Ford’s Cavalry trilogy in 1948’s Fort Apache, John Wayne returned to lead the director’s follow-up in She Wore a Yellow Ribbon a year later. Given a budget of $1.6 million made the movie one of the most expensive Westerns at that point in Hollywood history. Named after the US military song of the same name, once again the Johns shot the movie in the iconic Monument Valley along the Arizona-Utah state line.

The old soldier’s mission was to soothe tensions between the Cheyenne and Arapaho Indians following Custer’s Last Stand aka the Battle of Little Bighorn in 1876.

Meanwhile, Brittles had to transport the wife and niece of his commanding officer to safety. But when both these objectives stalled, he pursued a meeting with a Native American chief to prevent the outbreak of war.

Western fans will know one of the movie’s most memorable moments took place during a real-life thunderstorm, a scene that came about after an alleged conflict between Ford and his cinematographer Winton Hoch.

Hoch, who based much of She Wore a Yellow Ribbon’s imagery on the cowboy paintings and sculptures of Frederic Remington, won the Best Cinematography Oscar for the movie in 1950.

But this came at a cost when the weather turned for the worse while shooting in Monument Valley.

Ford and the DP had already been feuding throughout production, but allegedly none more so when ironically capturing the movie’s best scene.

They were filming a line of calvary riding through the desert when a real thunderstorm appeared upon the horizon.

Harry Carey Jr, who played Lieutenant Flint Cohill in She Wore a Yellow Ribbon, remembers that day on set differently.

The actor said that after Ford had completed filming for the day when he noticed the on-coming storm and asked Hoch if they could shoot during the unique opportunity.

To which Ford replied: “Winnie, open her up [the camera lens] and let’s go for it. If it doesn’t turn out, I’ll take the rap.” The DP agreed and said: “Fair enough, Jack.”

John Wayne: She Wore a Yellow Ribbon set feud that led to the Western’s most iconic scene