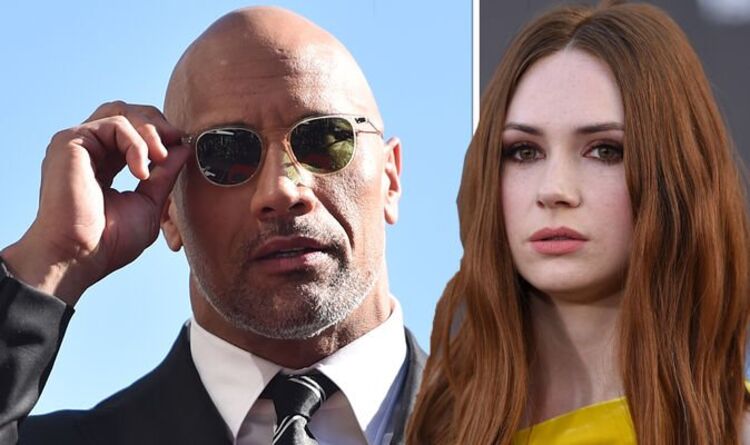 Jumanji stars Johnson and Gillan returned to the big screen in 2019 in the sequel Jumanji: The Next Level. This follow-up showed the titular video game malfunctioning, before dragging even more characters into the virtual world (including Danny DeVito and Danny Glover). But explained how, during the shooting of the movie, the Marvel star was the target for a number of jokes from Johnson and Hart.

Gillan, who is best known for playing Nebula in Guardians of the Galaxy, spoke to Jimmy Kimmel at the time, who asked who she preferred working with on screen: Johnson or Hart. But she bluntly told the talk show host: “Neither of them.”

After this unexpected response, she explained: “They make fun of me relentlessly!” Gillan, who was appearing on Jimmy Kimmel Live! to promote the movie in 2019, revealed that they attempted to mimic her during shooting.

Gillan recalled: “They try to impersonate Scottish accents very badly. It’s a travesty to listen to. They sound like someone doing a bad impression of Dick Van Dyke in Mary Poppins.”

It seems like she got her own back, however. Jumanji: The Next Level once again has Gillan playing Ruby Roundhouse, the virtual femme fatale. And this time around, she was given a new weapon to use during her various battle scenes: nunchucks.

Gillan added: “I kept thinking: ‘Oh no… I really need to be careful with the nunchucks!’ It was such a cool thing to learn that I never thought I would get to do in my life.” She even kept a pair of nunchucks as a souvenir from Jumanji: The Next Level, noting that she “hoped” to use them in the future. Gillan added: “Probably not in real life, but maybe in another movie. Hopefully.”

Fans of the Jumanji series will be able to see the fan-favourite characters make a return to the big screen in the coming years after news about a Jumanji 3 was recently released.

Jumanji producer Hiram Garcia recently revealed: “We have a really fun pitch, we’re actually getting ready to take it to Sony to let them hear what we’ve been cooking up. We’ve got a big vision for [the next Jumanji] movie. So we’re fired up for that. We’re taking it in soon.”

Until then, fans of the series can watch Jumanji: The Next Level on Netflix now.