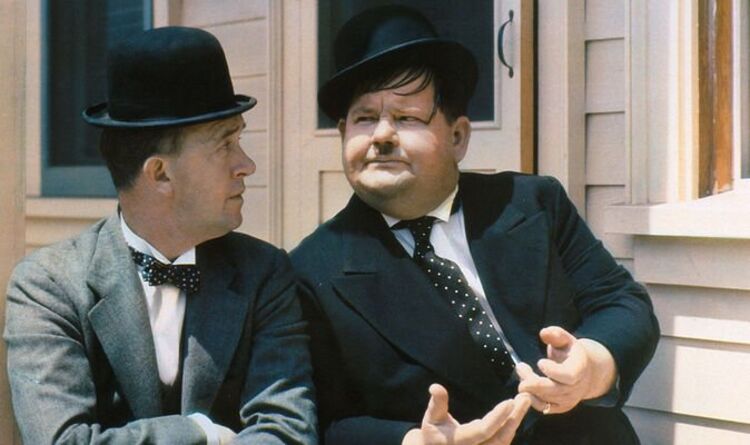 The legendary comedy duo are honoured with a dramatic retelling of their lives on BBC Two tonight. Directed by Jon S. Baird, ‘Stan & Ollie’ looks at how the pair delighted audiences on both sides of the Atlantic. British actor Steve Coogan shows he has an ear for a tune in his role as Cumbria-born Stan Laurel. And, sharing the screen with him is John C. Reilly, who gets into the character of Oliver Hardy — with the help of some prosthetics.

The film shows how Laurel and Hardy’s fame in America began to dwindle as they cut ties with Hollywood.

The story, which focuses on the men’s friendship, sees them tour Britain and Ireland in the mid-Fifties.

In real life, Laurel and Hardy’s incessant tours were extremely “demanding” and took their toll on the pair’s health, according to Simon Louvish, an author with extensive knowledge of the two.

He penned the 2002 biography, ‘Stan and Ollie: The Roots of Comedy: The Double Life of Laurel and Hardy’.

In an interview with Time magazine in 2018, the year ‘Stan & Ollie’ came out, he discussed their time on the road.

He said: “They embraced these demanding tours which were quite physically exhausting.”

The expert had not seen ‘Stan & Ollie’, which portrays Laurel and Hardy as having tense disagreements with one another.

Mr Louvish claimed that any animosity between the pair in real life was not because they disliked one another, but due to them being worn out.

He explained: “They were both very ill in their later years.”

Their British tour in 1953 and 1954 would be their last due to their declining health.

“Here are two bums wandering about. They come from nowhere. They have no money.

“They’re always trying to do the right thing, but get into a fine mess.

“They take failure and make it into something you can laugh about.”

In their later years, Laurel and Hardy were determined to keep performing despite their health issues and lack of material.

Mr Louvish said: “They had run out of stuff, yet they’re trying to do material and buoyed up by the fact that people love them.

“They can’t make more movies, yet they want to continue until death.”