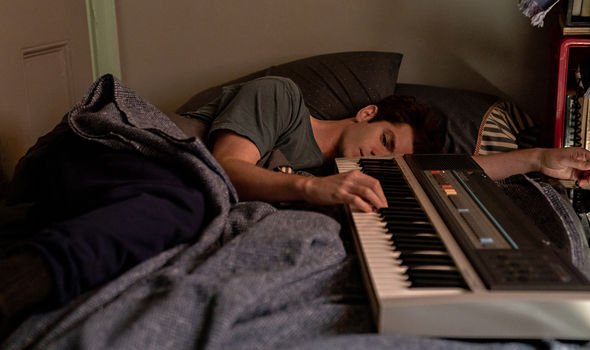 Larson, the creator of the Pulitzer Prize-winning musical Rent, lost his life on the eve of the play’s first public performance. Before he had penned the highly-praised show the American playwright wrote and performed a semi-autobiographical rock monologue show titled Tick, Tick… Boom! The topic of the show told of the struggles he went through to get his first-ever show, Superbia, a workshop – all while wrestling with the daunting reality of turning 30-years-old.

Superbia was a fantastical retelling of George Orwell’s 1984, where a futuristic society is addicted to electronic handheld devices that they cannot take their eyes off of.

Larson’s oddly prophetic show never made it to the stage, but the journey it had, and the trouble Larson endured during its production, provided him with the inspiration to continue striving for his dream, and to write Tick, Tick… Boom!

The movie stars the former (and maybe current?) Spider-Man actor Andrew Garfield as Larson in this semi-autobiographical movie – but there have been some changes to the original show.

Director Miranda exclusively told Express.co.uk that some of Larson’s music was included in the movie that has never seen the light of day before.

Miranda said: “[Screenwriter] Steven Levenson and I worked really hard to create – all right, if Jonathan Larson ever had the chance to make this into a film, what would he pick and choose?

“What songs work better on screen, what don’t? We really tried to think of him as a collaborator in this [film].

“We cut two songs from the Off-Broadway version [of Tick, Tick… Boom!], we put two back in that he used to perform in the monologue.

“We grabbed some sections of Superbia that no one has ever heard! He spent his 20s writing this musical.”

Miranda went on to add: “The guiding principle was always: what would Jonathan Larson want to see on that screen?”

Although Tick, Tick… Boom! is as close as fans might get to a Larson biopic, the Hamilton star noted that the writer himself didn’t even see it as a faithful retelling of his own story.

He noted that Larson changed the names of his real-life girlfriend and best friend for Tick, Tick… Boom!

This action, and others like it, allowed Lin to take some liberties with how the story of Larson’s show played out on the big screen.

Miranda explained: “For me, it’s sort of… Jon gave us several gifts when writing Tick Tick Boom. Even in his original draft, they were always ‘semi-autobiographical.'”

DON’T MISS…
How did Jonathan Larson die? What was his cause of death? [INFO]
Tick Tick Boom review: Andrew Garfield is captivating [REVIEW]

Miranda said: “In doing so he gave us license to play with that semi-autobiographical nature. There are many drafts of the rock monologue he performed in the 1990s.”

Tick, Tick… Boom! may not have been the perfect retelling of Larson’s life, but Garfield felt he had a true insight into an “important threshold” of the writer’s story.

He said: “This is the brilliance of what Lin and Steven created in collaboration with the ghost of Jon Larson – and the imagination of what Jon would want.”

Garfield added: “For me, it felt like I was living in, kind of, in Jon’s psyche.

“We were hanging out in different chambers of memories, psyche, imagination – just who he was as a person in almost a timeless place.

“And I think that kind of thing starts to happen when you reach an important threshold in your life.”