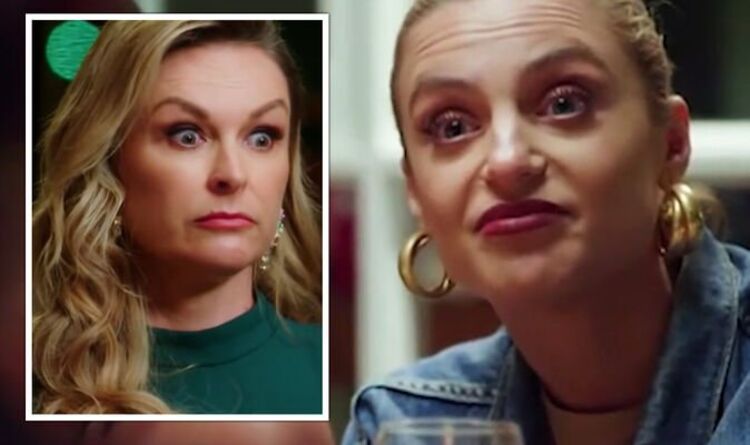 Married At First Sight bride Domenica Calarco smashed a glass during a heated argument on an episode yet to air in the UK which has left viewers questioning whether she should be “removed” from the series. The incident happened when fellow bride Olivia Frazer told the make-up artist she should change her voice in front of the other brides at a dinner. While no one was injured after Domenica shattered the glass, many viewers have deplored her “appalling” behaviour.

In scenes yet to air, a defensive Domenica asked Olivia if she thought her voice was “not okay”.

“Apparently not,” Olivia snapped before sipping her white wine.

When Domenica replied in a calm manner, Olivia questioned why she could not keep the volume of her voice at that level all the time.

The 29-year-old then erupted at Olivia and smashed her wine glass on the table in a rage and continued to shout and swear at her.

Viewers were left stunned by the “appalling” incident, with many calling for Domenica to be kicked off the show.

Former contestant, Steve Burley wrote on Twitter: “Any act of violence you are chucked off the show… This is what we are told. But hey, you can stay without a wife who’s left and just jump on another one nowadays. I’m appalled what I watched tonight.”

Shorey added: “The producers should remove Domenica from the show. That glass breaking could’ve sent a fragment into someone’s eye! That was more violent than Martha/Cyrell’s wine incident.”

Glenn Hampson said: “I don’t get how Domenica wasn’t excused from the experiment as a result of her violent gesture #MAFSAU #MAFS.”

@Spycatt049 fumed: “Domenica is the villain in tonight’s situation. She’s a classic, loudmouthed bully. [She] expects others to take her criticism but doesn’t like the favour returned. Olivia stood up to her. And she didn’t like it. She smashed a glass out of sheer rage. She could have injured someone.”

However, other fans of the series said they could understand why Domenica was so upset, but they still condemned the glass-smashing.

Megan J said: “Dom is an adult admitting she was wrong and genuinely apologising for her mistake. Olivia is rolling her eyes, sniggering and making snarky comments. This is disgusting. It’s honestly hard to watch.”

Sahar Adatia added: “It says a lot of Olivia’s character trying to silence Domenica speaking the truth, yet consistently failing to call out the destructive behaviour at hand – Dion’s disrespect, Andrew’s narcissism. It’s akin to enabling that behaviour. It only allows that conduct to prevail #MAFSAU.”

The following night Olivia broke down after she attempted to extend “an olive branch” to Domenica.

Olivia tried to “hug it out” with Domenica after the wine glass row the previous evening.

However, Domenica did not feel ready to hug Olivia which she understood.

Viewers will have to wait and see whether the pair managed to patch things up following their row.

Domenica revealed during a radio interview with Nova’s Fitzy & Wippa earlier this week she “100 percent” regrets ever smashing the glass.

She admitted: “I wish I’d never broken the glass. That [was] never my intention. I never wanted to do that.

“It was really like I had reached my boiling point. And I think everyone does have their breaking point and that was mine.”

However, she teased more drama is in store for viewers, telling listeners the moment of rage was “the catalyst for a lot that’s coming”.

Married At First Sight Australia continues on E4 and it is also available on Channel Nine.