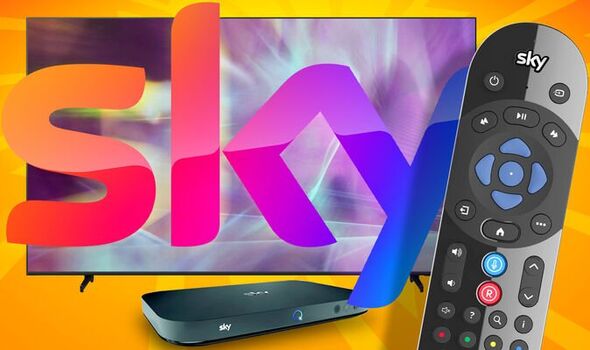 Sky Q has a number of clever software tricks that you need to master (Image: SKY • GETTY )

Sky Q is packed with clever features and tricks. Whether you’re looking to jump into a new boxset, find a lost remote down the back of the sofa, or multi-task during your latest binge-watch …Sky has built a number of nifty software tricks into its set-top box to help. Whether you’re a long-time Sky TV subscriber or you’ve just taken delivery of your new set-top box, Express.co.uk has rounded-up nine tricks that everyone needs to know.

And if you’re looking to upgrade your telly package or slash your monthly bills, you can also check out the best Sky TV deals available right now.

So, without further ado, here are our essential Sky Q tricks and tips…

OK, let’s start with the basics. If you find yourself juggling between two or three different remotes to control your television, soundbar, and Sky Q box …Sky has included a nifty trick to make your life a little easier. You can use your Sky Q remote to control everything in your set-up – the sound system, turning on your television, switching between HDMI inputs, and more.

First of all, you’ll need to set-up your Sky Q remote to control your TV model. To do that, head to Settings > Setup > Remote and follow the on-screen instructions to find the right signal for your telly manufacturer and model. After that’s sorted, you’ll be able to control volume with a single remote (this is possible if using an external sound system, like a Sonos Beam, provided you’ve got the right setting enabled in the companion smartphone app).

You’ll need to hold it down for a few seconds for this to work, but it should mean you can put at least one more remote out of sight in a drawer and save on AAAs.

If you’re struggling to find your Sky Q remote under the piles of discarded wrapping paper, there is a quick-and-easy way to locate it. Pressing the Q on the front of your Sky Q box will start a repetition beeping sound from a small speaker on the remote (a bit like a car alarm, but for your remote).

Sky included this feature to help you quickly find a remote lodged between two cushions down the back of the sofa …but it works equally when the remote is hidden by Christmas detritus. To stop the beeping, press any button on the remote to signal that you’ve found it.

If you want to use voice commands with your Sky Q box, you’ll need to hold the microphone button (Image: GETTY • SKY)

Sky Q is a brilliant option when it comes to watching the latest movies in the best quality available. The set-top box has supported 4K Ultra HD picture quality for years and recently added HDR into the mix. Provided that you have an HDR-compatible telly, the latter brings more accuracy for scenes with tough lighting conditions. If you’re watching a gloomy horror movie or a vividly-lit Christmas wonderland, you’ll notice the upgrade.

And it’s not just the picture, Sky Q also supports Dolby Atmos surround sound. Dubbed Dolby Digital Plus in the Sky Q settings menu, this format is designed to create a cinematic experience in your living room – with rumbling bass and surround sound to truly immerse you. Unfortunately, it can be a little tough to work out exactly which titles support Dolby Atmos. Thankfully, you can ask your remote.

Holding down the Microphone button on your Sky Q remote (either the blue button on the front of the remote, or the small button on the right-hand side, depending on which model you have) and saying “Show Me Dolby Atmos Content,” will load a separate menu filled with all of the latest shows and Hollywood blockbusters that support the immersive audio format for your surround sound system.

Sky has a pretty phenomenal on-demand library. However, the boxsets and movies available as part of your subscription aren’t available indefinitely. The satellite firm refreshes its offering on a pretty regular basis and if something passes its expiry date – you won’t be able to watch.

Fortunately, there is a clever workaround to avoid this issue.

If you record any movie or boxset onto the hard drive inside your Sky Q box, it will available for as long as you have your set-top box plugged in underneath your telly. So, while a particular film or show might’ve left the on-demand library… you’ll still be able to watch as many times as you like without any issues.

Just make sure you have enough space on your Sky Q hard drive to store dozens of episodes of TV shows or 4K movies.

No, that logo at the top of the Sky Q remote isn’t decorative – it’s a shortcut (Image: SKY • GETTY)

5/ Jump To Your Recordings

If nothing is taking your fancy in the TV Guide, there is an easy shortcut to jump to your Recordings and look through any box sets, blockbusters, or episodes that you’ve already saved to your Sky Q.

Tapping the “Sky” logo at the top of the remote will immediately load the Recordings page – and it works wherever you are in the Sky Q menu too! Based on the reaction to some Sky Q viewers on social media, it seems most assumed the logo on the remote was purely decorative and are pretty chuffed with this time-saving new trick.

If you’d rather, you can use the voice control feature. Press and hold the microphone icon and say “Go to recordings”, “My recordings”, “Take me to recordings”, or “Open my recordings” to launch the recordings menu and all of the latest episodes, films, and on-demand boxsets you’ve stashed away for later viewing.

Oops, have you switched between channels and immediately regretted it? Unless you’ve memorised the channels numbers, you might think the only way back to what you were previously watching is to head to the main menu, then select TV Guide, then start trawling through the list of channels… thankfully, there is a much easier way.

Press the right arrow on the remote to see the last channel you were watching. Press the middle button to jump straight back into the action. This is a really nifty way to cycle between two channels, to check the scores between two matches or avoid the dreaded advert breaks, for example.

Can’t decide between two matches? With Sky Q, you don’t have to (Image: SKY • GETTY)

Sometimes it can be tough to decide what to watch with the family. And when there are two competing sports fixtures, these debates can become pretty heated. Thankfully, the team at Sky is well aware of how divisive Christmas scheduling can be and have designed a feature to prevent any arguments.

Sky Q owners with a subscription to Sky Sports can use the nifty split-screen option to watch two channels at the same time. To launch the feature, simply head to Sky Sports Main Event and press your red button on the remote. This will then load the option to choose any other Sky Sports channel to have on the right-hand of the screen in a second window.

To avoid an overlap of sound when watching two broadcasts, audio will play from whichever event you’ve selected. You can switch the sound between these two by pressing left and right to highlight the panels.

Of course, squeezing two broadcasts onto a single television means neither will fill the entire screen. If you want to take advantage of the full-screen real estate in the living with a single Sky Sports channel, it’s possible to watch a second on an iPad or Android smartphone using the Sky Go app too. Splitting the screen isn’t possible on Sky Q mini boxes.

Everyone knows how to fast-forward through a show. But sometimes that isn’t quite fast enough. Thankfully, there are a few speedier options for those who want to skip to a particular scene in a movie, or catch-up on the final few moments of a TV episode.

Pressing the Up arrow on your Sky Q remote (or swiping upwards on the touchpad for those with that remote model) and then pressing the Right arrow will jump through the episode or film faster than fast-forwarding. Two or three taps should skip an entire advert break, for example.

However, if that’s still not fast enough for your tastes, there is another option. Using the voice control capabilities of your Sky Q remote, you can say “Go To 45 Minutes” or “Skip 30 Minutes” to immediately race to a certain point in the show. For those who owned a Sky+HD box in the past, this is the closest that Sky Q has to match the “Start From…” feature which let viewers type-in an exact time to start playback of a recording.

If you’ve got a good sound system connected to your Q box, AirPlay lets you tap into that (Image: SKY • GETTY )

If you’ve kitted-out your television with a good sound system, you’ll likely want to take advantage of those speakers for more than just movie night. Thankfully, Sky Q arrives with a number of technologies that allow you to wirelessly beam music to any connected speakers. Both the Sky Q 2TB and Sky Q Mini boxes support Bluetooth, which lets you stream music from any source on your iPhone, iPad, Windows or Mac, and Android phone and tablet.

But more exciting than that, Sky has added support for AirPlay. This Apple-designed system lets you stream lossless audio from your iPhone, iPad or Mac with a tap. As long as you’re on the same Wi-Fi network, there’s no need to go through the hassle of pairing devices and connecting to the box, like you’ll have to endure with Bluetooth. AirPlay support isn’t built into every app, but you’ll be able to beam audio with a tap from Apple Music, Spotify, and PocketCasts, to name a few.

You can also stream from the YouTube app to your Sky kit, thanks support for Google’s Chromecast technology. This provides a similar experience, relying on Wi-Fi rather than Bluetooth, to Apple’s AirPlay for Android users. Regardless of which system you use, if you’ve got a decent sound system connected to Sky Q, you’ll definitely be able to hear the difference.

Master Your Sky Q Box: 9 Essential Tips And Tricks Everyone Needs To Know

Instagram DOWN: App not working for users around the world again...