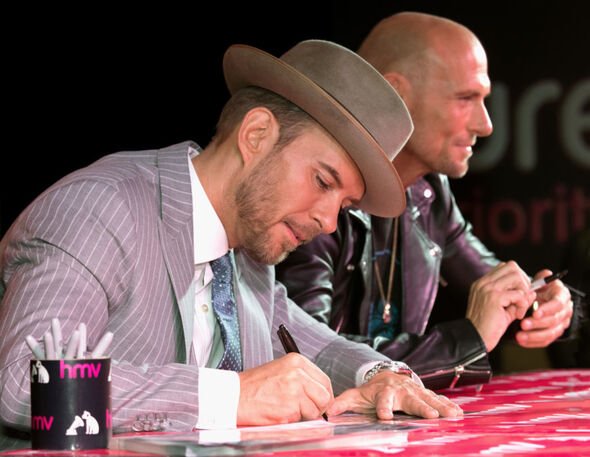 Now he’s back, doing the business in Britain again. As we speak his new album, The Beautiful Unknown, is, “Number one on Amazon, number three on iTunes, number two in the indie chart,” he says – and number 7 with a bullet in the official UK Top Ten.

Matt, 53, is happy but exhausted. He’s returning from a solid week of personal appearances in record stores all over the country, from Manchester’s Arndale Centre to small independent Crashed Records in Leeds where fans queued out in the snow.

Every two-hour signing session turned into four hours. Even on the short walk from Newcastle HMV to his parked car this morning, Matt had to pose for scores of selfies.

“My fans are awe-inspiring,” he says. “They’ve turned out in their hundreds everywhere, lines out the doors.

I spend a lot of time with my fans – they treat me like family. The connection goes beyond music.

“One gentleman, who was terminally ill had been out to Vegas to see me. You hug these people and hope you’re going to see them again.”

Matt’s album has been released on his own independent Lewisham Records label. “We decided to do it ourselves and we smashed it,” he grins.

He’s taking on his friend Michael Bublé who of course is on a major. “It’s like David and Goliath,” he laughs. “We’re very close on iTunes.”

Born in Lewisham Hospital, Goss is south east London born and bred. “Good to hear that accent!” he tells me when we speak.

He was 19 when Bros had their first huge hit with When Will I Be Famous.

Their phone number was on sale at the local school (for £2 a throw), and every morning the answer machine was full of messages of love from devoted Brosettes – making life hard for his maintenance man step-father Tony.

“All my mum’s things got nicked, it was bonkers,” says, Matt. But fans also gave his late mother Carol gifts, including flowers, wine and sweets.

Bros, the brothers plus bassist Craig Logan, had eleven hits in four years including I Owe You Nothing and Drop The Boy; their first album Push went to number one in 19 countries and sold more than 12million copies.

“If you’d told me I’d be in the charts 35years later…,” he laughs, shaking his head.

“There’s definitely a sense of south east London boy done good with me.”

Matt Goss has worked with Dean Martin, taken advice from Jerry Lewis and even sung for Joe Biden – “a gentleman, he asked me about my mum and talked about his late son”.

But you get the sense he is most chuffed about being mentioned by Del-Boy Trotter.

“Only Fools and Horses was a religion for us. Bros being put into a storyline was one of my proudest moments – Rodney was going on a cruise with the Brosettes. Brilliant. It makes you feel part of the tapestry of our culture!

“Spitting Image spoofed us with ‘when will I, will I start shaving?’. The Young Ones too, I loved it.”

He met Russ Abbot, then a huge TV star, on a plane to Barbados and the much-loved comedian ended up staying at Matt’s villa. “We had dinner with Bob Monkhouse. Lovely people; it felt like the old guard helping the young guard.”

After Bros, Matt went solo notching up four hit singles, but he was reborn as a cabaret star in Las Vegas, starting at the Palm Springs hotel and moving to Caesar’s Palace for a ten-year residency.

“I was there for eleven years – a record for a British performer – doing four shows a week, and world tours every year. You learn your craft!”

Famous fans include Sharon Stone, Jason Statham, Kim Kardashian and Jerry Lewis “who gave me really beautiful advice”. But Matt met his own hero too.

“I was the last person to sing for Muhammad Ali, in his house,” he says. “I had the shorts he wore for Rumble In The Jungle – they still had blood on them and he didn’t want to sign them. I sang These Arms Of Mine and his face just lit up and he signed. I gave his wife a beautiful diamond ring to say thank you.”

Matt has worked with Jay Leno, David Copperfield, and Dean Martin – “I did his TV special, it was so good…he was always warm and friendly.”

He did TV shows and concerts with Bob Hope too.

“I’d do comedy with him, he taught me the timing…I went shopping with his wife Delores. I thought I could shop, but I couldn’t hold a candle to her.”

Matt even played the part of “the new Rat Pack” with P Diddy, Aaron Paul from Breaking Bad and Sopranos star Frank Vincent in a famous US Ciroc vodka ad.

Goss loves Sin City and the affection is mutual. He won the Icon Award at Caesars Palace, was given the keys to the Vegas Strip, and 8th August was declared Matt Goss Day there.

“I was made an honorary captain in the US Army for singing for troops, British and American,” he adds. He also received a UN Humanitarian award for raising millions for breast cancer.

He quit last year. “It was time to call it a day, for my voice. I might go back but never for four nights a week again. I enjoyed flying the flag for us in America though, I’m a royalist, and a proud Briton. My grandad, who was born in Bow, in East London, was a gunner in World War II.”

A thoughtful man, Matt has strong views on modern Britain. “We’re too politically correct, as a nation we’ve lost our way. We have to find our way back to our sarcastic sense of humour. We shouldn’t be afraid of complimenting each other.

“We have to trust people to make choices.”

Matt is irritated by our culture of envy – “Nobody keys someone else’s car in America, success is a good word there” – and also car-hating authorities who “won’t allow working people to get to work without being charged to drive through our own city.

Matt Goss and Luke Goss present an award at The BRIT Awards 2019 held at The O2 Arena (Image: Getty)

“Let’s have some freedom! Let’s lift each other up.”

Music was always part of his life. His grandad Samuel, known as Harry, loved crooners like Sinatra and Dean Martin. “That’s where I got my love of air in the voice,” he says.

Matt’s aunt Sally turned him on to Stevie Wonder, and “dad was into Cream and Free, Thin Lizzy, Deep Purple…and the Rolling Stones who had a surprising amount of soul in their music.

“I bumped into them in Salt Lake City once. Keef clocked me and said, ‘What are you doing here?’ Then Ronnie Wood borrowed by jacket, wore it on stage and they all signed it.”

Growing up, he loved 2-Tone Ska “Madness, the Specials, Bad Manners, the Selecter…We were obsessed, we had proper crops, all the clothes, the trilby hats.

Then we became new romantics. Duran Duran were the band, but the first concert I ever saw was Depeche Mode.”

Bros sold more than 16million records worldwide. Snooty critics dismissed them as teeny-boppers. This irks him to this day.

“We were discovered as a band, then we got screamed at and suddenly we were labelled teen idols. We recorded demos of all the tracks on Push before we got a deal. We were musicians!”

Bros reformed for two London 02 gigs in 2017, the first of which sold out in seven seconds flat, and then starred in Bafta-winning documentary Bros: After The Screaming Stops that was watched 20million times and brought in a new generation of fans. The twins stay in touch via PlayStation.

Critics are comparing The Beautiful Unknown to Push; Shirley Lewis, who famously worked with George Michael, called it Matt’s equivalent of George’s Faith.

The album is a triumphant return to pop for the national treasure, weaving deep themes into strong tunes.

Highlights include the stadium anthem title track, and ballad Soldiers Of War about broken relationships.

Matt who has homes in Vegas and LA is still looking for Miss Right, splitting with his last girlfriend over her social media fixation.

He has signed up for a lead role in his first movie, Cobbler Killer Stranger, which is currently in pre-production, and plans to release at least three more songs from the new album. He says he wouldn’t rule out signing to a major label again, but would want Lewisham Records to be part of the package. Chiefly, he’s happy to be home.

“I wanted to come back to my own country where I’m treated like family,” he says. “My fans create life memories for me and it’s a reciprocal exchange. It moves me to this day. This trip back to the UK is what my soul needed.”

*Matt Goss headlines a special performance at the London Palladium on 23rd April.