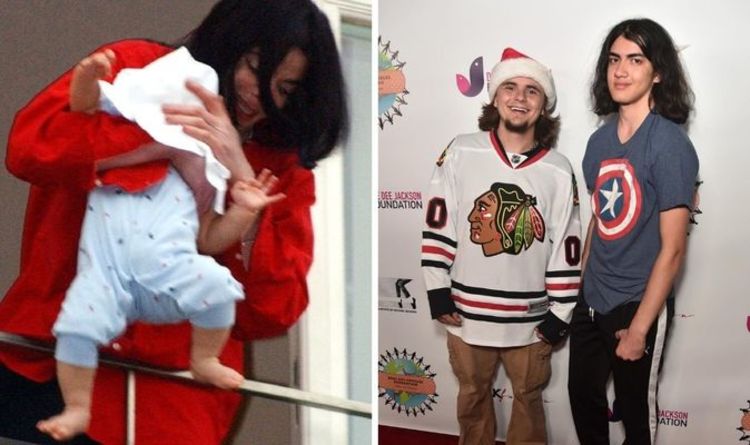 Michael Jackson son: What does Blanket look like now? How old is he?

Michael Jackson had two sons and a daughter before his death in 2009. The youngest, Blanket, has been someone fans are very interested, including his heritage. He recently came into his own as an 18-year-old, but what does Blanket look like now?

Blanket, who now goes by the name Bigi, has recently purchased a new home for himself now he has flown the parental nest.

His guardian was named Katherine Jackson, his grandmother, with whom he has lived until turning 18-years-old.

Now, he is out in the world, having bought his own home and recently moved in.

His house is reportedly worth a whopping $2.6million (£2.3million).

Bigi posts film and TV reviews on YouTube along with Prince and their cousin Taj, but is a high school student at present and is rarely seen out in public.

He is a teenager and, as one would expect, looks younger than his two siblings, Paris and Prince, both of whom are in their 20s.

Bigi is a tall, slim young man with long hair, perhaps emulating his father’s long locks which he had for a great deal of his life.

Who is Blanket’s mother?

The couple divorced shortly after, but on February 21, 2002, he had a third child, Prince Michael II, known as Blanket.

Blanket became known as such due to being covered in a cloth during many public appearances when he was a baby.

This became even more prominent in the media when Jackson held the baby over the railings of the balcony of a hotel room in Berlin, four storeys above ground.

The hotel incident took place when Blanket was only a few months old, and over time the nickname stuck.

Many of Michael’s children were similarly covered with blankets and other items to shield them from the press.

In terms of his parentage, Blanket was originally said to have been conceived by an anonymous surrogate, despite his older siblings, Paris and Prince, being the children of Jackson’s second wife, Debbie Rowe.

While this is true, there were some interesting conspiracy theories which came out.

Firstly, in the 2003 documentary Living with Michael Jackson, the pop star told Martin Bashir: “We have an agreement that we can’t talk about.

“We have a contractual agreement, who she is and everything, that’s how we worked that out.”

However, despite confirming he had a relationship with the mother, he then completely changed his story, later telling Bashir: “I used a surrogate mom, my own sperm cells.

Despite these mixed messages from Jackson himself, The Mirror claimed to have uncovered Blanket’s surrogate’s real name: Helena.

A friend of Jackson’s told The Mirror: “Michael wanted a designer baby.

“He had two wonderful children but wanted one more and was quite specific on the gene pool he wanted to tap into.

“He chose Helena because she had a Latino background but she was also a US citizen and had quite fair skin.

“He liked her because she was very attractive and seemed stable and intelligent.

“She was a nurse or medical assistant, which he also liked.”

The friend added there was no “drama” with Helena, who just “got on with it”.

3 Ways the Music Landscape Needs to Change Post-Pandemic to Protect...

Johnny Depp NEARLY lost out on Pirates of the Caribbean role...