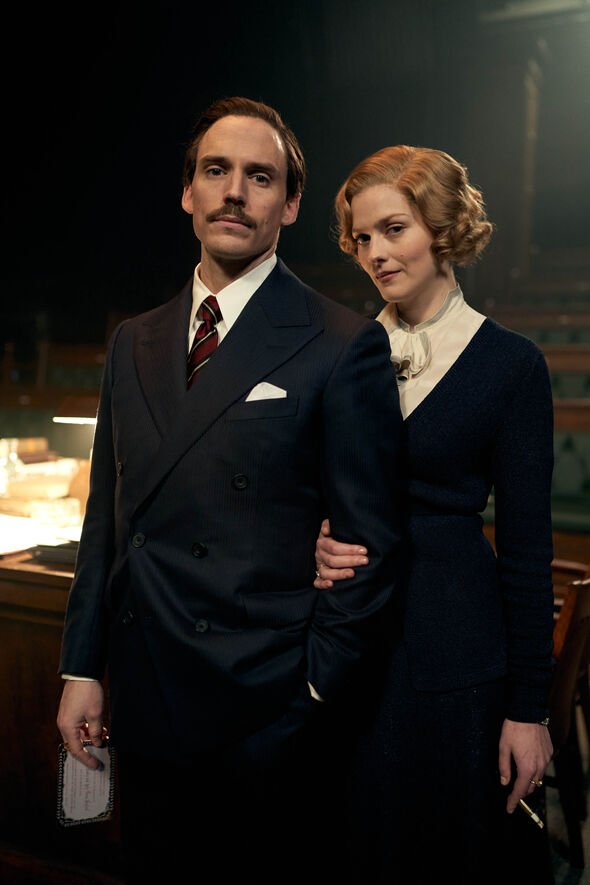 Peaky Blinders fans were left aghast at last week’s episode as Tommy Shelby hooked up with the enemy. Diana Mitford, lover of Sir Oswald Mosley, lured Cillian Murphy’s character into a hotel bed before spilling the beans to his wife. The pair enjoyed a sordid night of passion, with the controversial Diana later telling Tommy’s wife she had “sampled” her husband. Viewers already despised Nazi sympathiser Diana, who was engaged to Mosley, leader of the British Fascist Party.

Yet the life of the real Diana Mitford is worthy of its own TV series.

Described as “more dangerous” than her husband in 2002 files released by MI5, Diana had five sisters, with each a source of fascination to many.

She scandalised her family when she was just 18 after secretly becoming engaged to Bryan Guinness, heir to part of the family brewing fortune.

Eventually her parents were persuaded, with the pair immediately becoming one of London’s ‘it couples’.

Diana (middle) was one of the controversial Mitford sisters. (Image: GETTY/BBC)

They had two sons within the first three years of their marriage, before Diana embarked on an affair with Mosley.

Ms Atkins claimed, according to a 2014 report in the Daily Mail, that Unity had a “fascination with all matters sexual”.

She is said to have lost her virginity to Mosley in the summer of 1932, at the same time Diana engaged in an affair with the far-right politician.

The Daily Mail report claimed: “This is said to have happened on a billiard table in the early hours, and Atkins suggests Diana may even have encouraged her future husband’s intimacy with her sister.

“It chimes with suggestions of Diana’s voyeuristic interest in Unity’s love life during their time together in Nazi Germany.”

Diana visited Germany with her sister in 1934, attending the first Nuremberg rally after the Nazi rise to power.

Unity was a friend of Adolf Hitler, and introduced Diana to the Führer the following year.

Unity, an aggressive anti-Semite, had previously been mixing in like-minded Nazi circles — and was labelled “more Nazi than the Nazis” by MI5.

Mr Litchfield, in his 2013 book Hitler’s Valkyrie: The Uncensored Biography of Unity Mitford, claimed Diana returned home to the sisters’ shared apartment one night to the sound of carnal activity overpowering the Nazi anthem.

He wrote: “Later, with considerable pride, and no hint of shame, Unity admitted that sex with the SS officers was her Eucharist.

“Her bed, draped with swastika flags and surmounted by iconic images of the Führer, was the altar devoted to her messiah, on which she gave her body to those closest to him, his personal warriors.”

Staggeringly, Mr Litchfield claimed Diana would take pleasure in her role as voyeur.

He said: “By mutual consent they would often repeat the process.

“From time to time she also took SS lovers, but only one at a time.”

Diana retained a close relationship with Hitler — he told her war was inevitable over lunch in August 1939, just days before he invaded Poland.

Diana and her husband were imprisoned alongside other British fascists for much of World War 2.

Owing to his ill health, they were released in 1943 and placed under house arrest until the end of the war.

Long after Oswald died in 1980, Diana remained vague on her Nazi leanings, but her obituary in The Telegraph says she was an “unrepentant Nazi” and and a diamond swastika was found among her jewels.

She appeared on Desert Island Discs in 1989, and caused controversy by saying that she had not believed in the fact of the extermination of Jews by Hitler until “years” after the war, adding that it was “not conceivable” some six million innocent Jews had been murdered.

According to the Daily Mail, her family has since said Diana did not truly support the fascist cause, instead she had “fallen in love” with the wrong man.

The feature-length finale of Peaky Blinders airs tonight at 9pm.