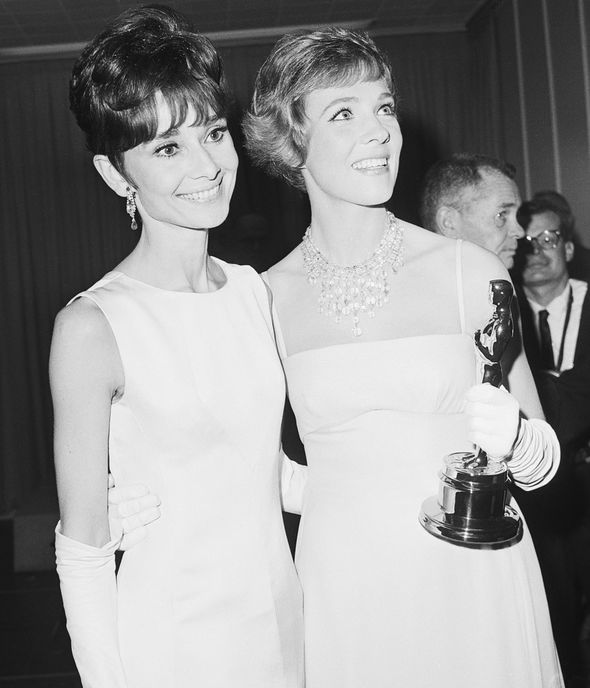 My Fair Lady – The Rain In Spain

By now, everyone knows that Hepburn’s voice was dubbed by Marni Nixon for the big-screen adaptation of the classic musical. Back in the Golden Age of Hollywood, it had been common practice and yet the actress found herself at the centre of a distressing storm of bad press and ill-feeling when her casting was announced, throughout filming and even when it was released. She was forced to publicly justify “wresting” the role from Julie Andrews, while her My Fair Lady co-star Rex Harrison made ill-concealed codded comments in his own interviews. The whole scandalous saga came to a head at the 1965 Oscars with the press headline coverage and TV cameras salaciously panning between the two actresses in the audience.

Ever since 1953’s Roman Holiday, the gamine and refined actress had been beloved of fans and critics alike. It was followed by Sabrina, Funny Face, The Nun’s Story and, of course, 1961’s Breakfast At Tiffany’s. So her casting in the Hollywood adaptation of My Fair Lady should have made perfect sense.

Except that everyone seemed to want another star, who had never appeared on the big screen. Julie Andrews had been an enormous hit on Broadway but she wasn’t just a theatre-goers’ darling. The record-breaking cast album topped the US charts for 15 weeks and 19 in the UK. It was the first-ever LP to sell a million copies.

Andrews’ face and, crucially, her voice were synonymous with Eliza Doolittle to most people. Studio boss Jack Warner, however, would not be deterred – and he was proved right at the box office and the Oscars, where only Hepburn was snubbed.

Some, controversially, have claimed that Andrews herself scuppered her own chances when Warner called her to discuss the film. She reportedly said: “I’d love to do it. When do we start?” But when she was asked to come in for a  screen test, she replied: “Screen test? You’ve seen me do the part and you know I can do a good job.”

Furious at her refusal, Warner publicly declared he would only consider established screen stars for what was shaping up to be the most expensive film in Hollywood history at that time: “You can say ‘Audrey Hepburn’ and people instantly know you’re talking about a beautiful and talented star. In my business, I have to know who brings people and their money to a theatre box-office.”

Hepburn was very aware of the building furore but two things swayed her decision to accept the role.

DON’T MISS
My Fair Lady’s Audrey Hepburn’s most glamorous look
Bridgerton star Julie Andrews: How she lost her voice – can she sing now?

Audrey: UNICEF got a badass soldier instead of a Hollywood princess

Audrey Hepburn: How star was ‘demonised’ for My Fair Lady role

Firstly, she was offered the enormous sum of $1million. Only three other actors at that time could command that amount – Marlon Brando, Sophia Loren and Elizabeth Taylor. It would be paid over seven years to help her with her taxes (and to help the studio balance its own books.)

But Hepburn also candidly declared: “I understood the dismay of people who had seen Julie on Broadway. Julie made that role her own, and for that reason, I didn’t want to do the film when it was first offered. I learned that if I turned it down, they would offer it to another movie actress.  I thought I was entitled to do it as much as the third girl, so then I did accept.”

That “third girl” was later revealed to be none less than Elizabeth Taylor.

Audrey Hepburn in the My Fair Lady film (Image: GETTY)

Hepburn was also assured that her own pleasant singing voice would be used primarily, except for the higher notes. While her dramatic performance has become iconic, the issue of her voice being dubbed has never gone away – and even upset the star herself at the time.

Andre Previn, the musical director on the movie, later revealed that Warner never had any intention of using Hepburn’s singing but strung her along to get her to take the part. The actress worked incredibly hard during 12-hour days to master the cockney accent, choreography and singing but early recording sessions were not promising. Director George Cukor said: “When she began, it was an agony for that girl to sing. But she is not afraid to make an ass of herself. She has the courage to do it, do it wretchedly at first, but do it.”

The filmmakers quickly decided they needed a full-time dubber and called in Marni Nixon, who had sung for Deborah Kerr in The King and I, and Natalie Wood in West Side Story.

Hepburn and Nixon rehearsed and then recorded together with the actress still convinced her voice would primarily be used, and still having vocal lessons every day. The situation rumbled on for weeks, with nobody willing to tell her the truth. In the end, it is estimated that up to ten percent of the final recordings are Hepburn.

Previn revealed her devastation when she finally found out: “She was very hurt because she felt that if she had taken Julie Andrews’s place and then couldn’t sing, it would reflect very badly on her. But she never said a word. I’m sure she had tears about it.”

Rex Harrison and Julie Andrews in My Fair Lady on Broadway (Image: GETTY)

The dubbing controversy loomed over the film’s release and at the New York premiere, Hepburn said: “I took singing lessons from a New York vocal coach and pre-recorded all of Eliza’s songs, ”but the final result is a blend. I must say, I take my hat off to the marvellous people in Hollywood who twiddle all the knobs and who can make one voice out of two.”

Critics highlighted the issue with the Sunday Telegraph sniping: “I still find the sight of a beautiful dummy singing someone else’s head off rather less than enthralling,” and Hedda Hopper adding, “Audrey Hepburn gives only half a performance.”

Even so, the film was a huge smash, raking in $72million on a $17million budget. At the 1965 Oscars, it won eight including Best Film, Best Director, and Best Actor for Harrison. Despite competing in twelve categories, Hepburn was not even nominated. Instead, she had to watch the woman whose shadow loomed over her performance walk up onto the stage.

Audrey Hepburn and Julie Andrews at the 1965 Oscars (Image: GETTY)

Andrews had not disappeared quietly after being snubbed for My Fair Lady. She had quickly become a hot property in Hollywood with her debut film, Mary Poppins, instantly making her a global star.

Released the same year, the film was made for a quarter of My Fair Lady’s budget but grossed a whopping $102million. It also received thirteen Oscar nominations and, famously, Andrews took home Best actress.

Many at the time and since have suggested that much of her win can be attributed to her acting peers, who vote for that category, righting a perceived wrong.

Andrews politely said before the ceremony: “I think Audrey should have been nominated. I’m very sorry she wasn’t.”

She also famously and fantastically cattily added when she collected her award: “My thanks to Mr. Jack L Warner, who made all this possible.”

When he collected his own Oscar, Harrison tactfully said: “I admire both my fair ladies.”