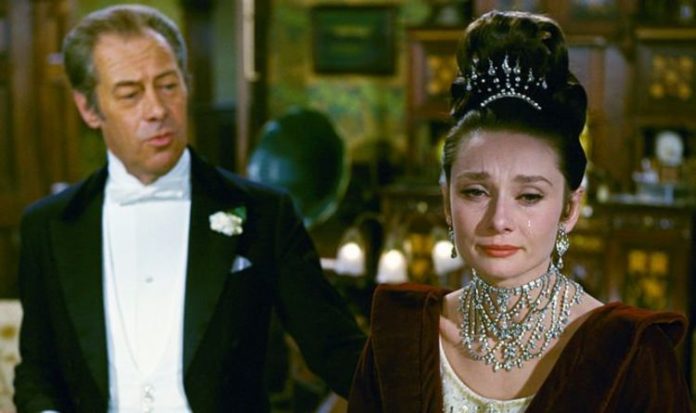 Harrison won a Tony Award for playing Henry Higgins on Broadway opposite Andrews. He followed that up with the Best Actor Oscar for the lavish 1964 big screen adaptation with Hepburn. He was charming, suave and sophisticated, the perfect refined gentleman. But his amusingly brusque treatment of Eliza Doolittle in the role was a pale shadow of what he was like in real life. He had famously refused to sing one of the most iconic lines to Andrews during the stage run and even tried to have her fired. This is the man who was so famously rude that when he punched an autograph hunter, the headline ran “fan hits sh*t.”

Harrison was only the fourth choice to play Higgins on Broadway, after Noel Coward, Michael Redgrave and George Sanders, and was, by his own admission, not a singer. Cary Grant, Peter O’Toole, Rock Hudson and Laurence Olivier were all approached for the film role. Yet, Harrison was always absolutely convinced that the show, and subsequent film, was all about him.

Andre Previn was the musical arranger on the movie and later said: “He felt whatever fuss was made about Audrey or Julie was pointless, because nobody was interested in the girl. They were only interested in him… Rex Harrison, who gave one of the most transcendental performances ever, was—and I don’t say this lightly—the most appalling human being I ever worked with. He was charming and funny and a great raconteur but, Jesus Christ, what he did to people. Rex didn’t like Audrey very much. He was mean about her, not to her. That was very much more his style.”

READ MORE: Julie Andrews: How she lost her voice – can she sing at all now? WATCH

Hepburn famously faced a backlash when she took the big screen role, with many loudly declaring the part should have gone to Andrews, who had received huge acclaim for her performance on Broadway. In public, Harrison was suitably sympathetic, while managing to also stick the knife in.

He said: “I’d done the show for so long in the theatre with Julie that any new leading lady was going to be a problem. Audrey also had to weather a great deal of adverse press publicity about how much she was being paid, for most of the press had sided with Julie, and had wanted Julie to get the part. Audrey is a very sensitive person, and could not fail to feel all this. It quickly leaked to the press that she was being dubbed and wasn’t ‘really’ singing the part she’d wrested from Julie and for which she was being so highly paid.”

Note how Harrison reinforces the contentious issue of Hepburn’s singing voice being dubbed (by Marni Nixon), something which she herself had been very unhappy about. He also repeatedly refers to how much she was being paid, implying that she didn’t deserve it, and somehow makes it sound like an aggressive Hepburn “wrested” the role from poor Andrews.

In fact, Harrison has raged behind the scenes that he was only be paid $250,000, one quarter of Hepburn’s fees. It was later reported that he slowly warmed to her on set, but only because all the continuing bad publicity for the actress and her own distress over being dubbed gave him even greater opportunity to dominate the production.

The actor had had a harder time with Andrews who was more overtly strong-willed. Hepburn was known to exercise a deceptively softer, subtler form of power that was once referred to as a “whim of iron.”

Andrews was reported to have used a profanity to describe her time with Harrison on Broadway, while he, during their explosive run, once stormed out of the theatre shouting. “If that b***h is still here on Monday, I’m quitting the show.”

Their relationship became so toxic, Harrison wouldn’t sing the famous line “I’ve grown accustomed to her face” in any way to her. The pair found themselves reunited in 1965 when he won the Best Actor Oscar for My Fair Lady. Hepburn wasn’t nominated, while Andrews took the Best Actress award for Mary Poppins.

The two actresses certainly weren’t alone in their experiences with Harrison. Hollywood legend Patrick Macnee said of him: “He was one of the top five unpleasant men you’ve ever met.” Charlton Heston called him “thorny.”

Actor Jared Harris, who was also his stepson, reported how Harrison struggled to keep staff: “He could never find one who would stay, because he was so appalling. He used to send the wine back from his own cellar and then rip into the butler for serving it to him.”

Roddy McDowell said: “He was emotionally unstable, like a wanton child. You always had to approach him with a firehose. He was an exquisitely impeccable actor but a basic hysteric—and unconscionable to his fellow actors.”

It wasn’t just fellow Hollywood stars who struggled with Harrison, who had been praised for joining the RAF in a non-combat role during World War II. However, Eileen Younghusband, who was a Women’s Auxiliary Air Force officer and served alongside the actor said: “He treated us like dirt. We were nothing because we didn’t have anything to do with his film career. He really thought he was someone special.”

His personality never changed and during the filming of Doctor Dolittle in 1967 in St Lucia Harrison was so enraged during a clash over his contract that he moved his yacht to block the cameras. When the situation escalated, the producers brought in Christopher Plummer to replace him and Harrison was forced to back down to keep the role.