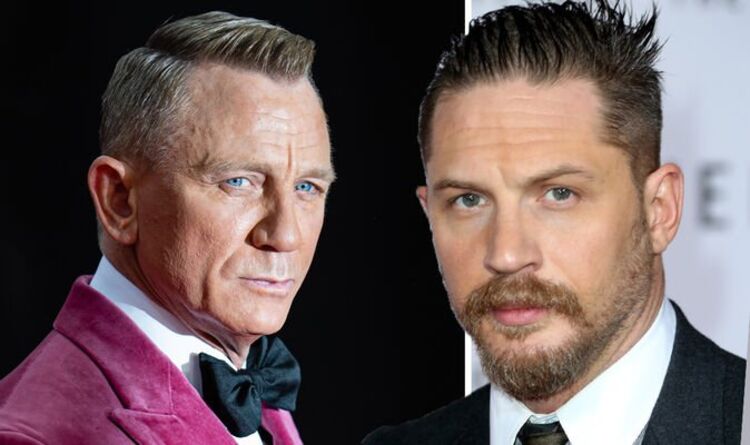 Daniel Craig‘s exit from the James Bond franchise was sad, but not surprising. After No Time To Die the 54-year-old had been playing 007 for 15 years throughout five films. Now all eyes are on the Bond bosses, and the latest Bond odds have suggested a few big names are in the running to become the next international spy.

Tom Hardy has been at the top of the Bond betting for some time, but things have just changed, and he has lost his spot.

Ladbrokes recently awarded Hardy an incredible 6/1 odds on becoming the newest man of mystery. These are some of the best odds he has had in a long time – and it’s no surprise considering how prolific the star is. Not only is he the titular character in the Venom series, but he has also played parts in the Batman franchise, as well as Peaky Blinders.

However, a newcomer to the odds has completely leapfrogged him.

Earlier this week the bookies announced a flurry of bets promoted Aidan Turner into the top ten of the Bond odds.

Although the official Bond actor announcement may not be revealed until later this year, the bookies’ odds are the best shot fans have of predicting who is going to come next. And Turner’s surprising launch into the Bond betting has turned a few heads.

The Irish star previously played the dwarf Kili in The Hobbit trilogy (the prequel series to The Lord of the Rings). He also plays Poldark in the raunchy BBC series.

This credibility has given him an incredible 5/1 on becoming Bond next.

Ladbrokes’ Alex Apati said of the hunky star: “As expected, interest is Aidan Turner is far from slowing down as the Poldark star continues to close the gap on long-time frontrunner, Regé-Jean Page. We wouldn’t be surprised to see the pair neck-and-neck at the head of the betting by the end of this month.”

Bridgerton actor Page has become massively popular in the past year because of the Netflix show, but does he have what it takes to be the next Bond?

Also in the running is Henry Cavill, who sits soundly beside Hardy with a 6/1. The Superman actor has a long-running history with the Bond role, however.

Cavill, who most recently played The Witcher (also on Netflix), went head-to-head against Daniel Craig in the audition process for Casino Royale.

The 2006 film eventually took on Craig, of course, but not before shunning Cavill. The actor has stated how he was told he was looking a little “tubby” at the time. Now, he might be looking to change their minds 15 years later.

James Bond No Time To Die is available to buy on Digital, DVD and Blu-ray.