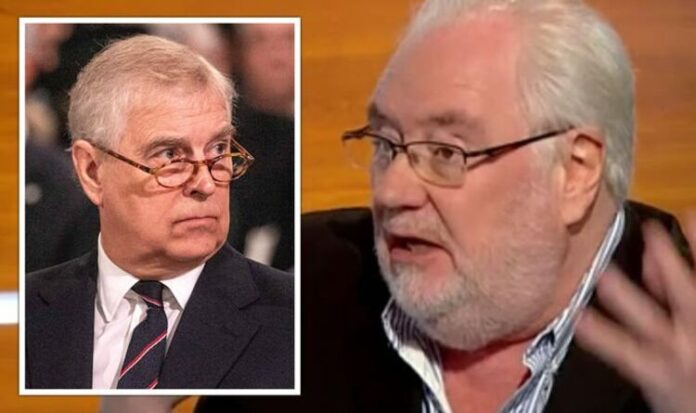 Prince Andrew arrived alongside the Queen to join the rest of the Royal Family at the Duke of Edinburgh’s memorial on Tuesday. The appearance of the Duke of York at the family event sparked criticism as the service took place less than a month after his settlement with sexual abuse victim Virginia Giuffre was paid. Giuffre claimed to have been abused by the Duke while underage, allegations the royal has vehemently and strenuously denied over the years.

Jeremy Vine Extra panellist Mike Parry questioned the decision to include the Duke in such a prominent role as escorting Her Majesty to her seat.

But he conceded “nobody can overrule the Queen” as she was reported to have insisted on having all her children in attendance at the commemoration for Prince Philip.

Mr Parry said: “I think we got to get this straight – nobody can overrule the Queen, at all.

“Can’t overrule the Queen, she’s the head of the family, that’s how the monarchy works, it goes right from the top all the way down.

JUST IN: ‘Are you a father?’ Valerie from Cornwall rips apart Owen Jones criticism of Queen on Vine

“He couldn’t have possibly overruled her and why would he want to overrule his 95-year-old mother anyway? She said it repeatedly, ‘I have four children.’

“And she wanted to make them all feel equally welcome because it was in commemoration of their father.”

Mr Parry also suggested the Duke of York could have used the thanksgiving memorial in a bid to redeem himself in the public eye.

He continued: “What I think should’ve happened is the Duke of York should’ve got to the door of the Abbey and then stood aside.

Prince Andrew appeared for the first time at a public Royal Family event since Prince Philip’s funeral to mark one year since the Duke’s passing.

The Duke of York travelled with Her Majesty to Westminster Abbey, where he took a front-row role by escorting her up the aisle towards Prince Charles and the rest of his siblings.

The disgraced royal sat to the left of Princess Anne and her husband Sir Timothy Laurence, with younger brother Prince Edward and Sophie, the Countess of Wessex to his left.

Prince Andrew’s daughters, Princess Beatrice and Princess Eugenie, were seated on the opposite side of the aisle with their husbands and right behind Prince William and Kate, the Duchess of Cambridge.