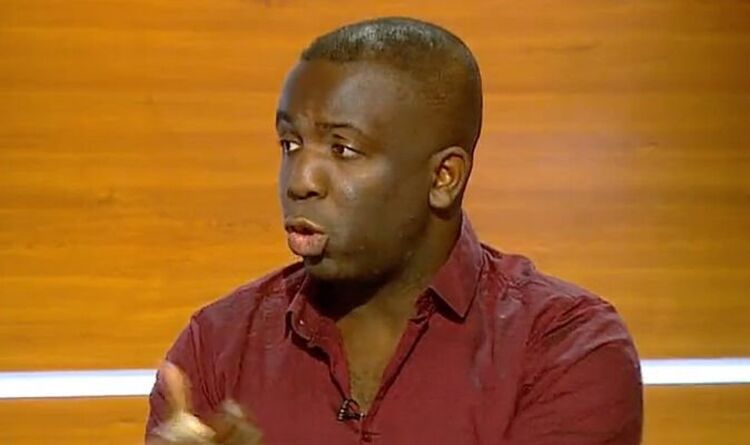 The anti-Brexit campaigner argued the British public only had two chances to vote on whether the UK should maintain close ties with the European Union. Femi told fellow panellist Emily Carver voters in 2019 expressed a majority preference in favour of parties backing staying in the EU but their vote was ignored. He said: “As for the electorate, the electorate only had two opportunities to give a vote since 2016.

“In 2017, the majority voted for parties committed to staying in the single market.

“In 2019 the majority voted for parties committed to a second referendum.

“The country very much turned against Brexit.”

Femi insisted Labour Party leader Sir Keir Starmer should not rule out rejoining the European Union but rather commit to ensuring the UK suffers no long-term disruption due to Brexit.

He continued: “As for the issue of damage, Keir Starmer has an obligation to say not we need to rejoin but, ‘anything in the Brexit deal that is hurting the British people, I will change.’

“Whether it’s by rejoining or renegotiating, that needs to happen.

“As per the large majority, that’s because the UK isn’t a democracy because the majority voted for parties committed to a second referendum.”

But his comments had Jeremy Vine on Five host Claudia-Liza Vanderpuije hit back: “Not a democracy? Think people in North Korea might say otherwise.”

“But if 40 percent vote Tories, the Tories will win.”

The comments come after Sir Keir told BBC Radio Newcastle “there is no case” for rejoining the European Union anymore.

The Labour leader said: “We have exited the EU and we are not going back – let me be very clear in the northeast about that.

“There is no case for rejoining.

“What I want to see now is not just Brexit done in the sense that we’re technically out of the EU, I want to make it work.

“I want to make sure we take advantage of the opportunities and we have a clear plan for Brexit.”

Sir Keir had previously called for a second referendum on membership of the European Union while serving as shadow Brexit Secretary.