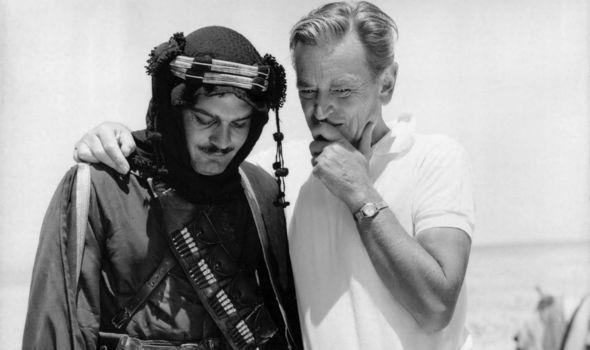 Omar Sharif – Lawrence of Arabia – ‘Nothing is written’

Omar Sharif is widely regarded as the greatest Egyptian actor of all time. Beginning his career in the Fifties, he appeared in more than 100 films, winning three Golden Globes along the way. He starred alongside Peter O’Toole, as Sherif Ali, in the David Lean classic Lawrence of Arabia, and won an Academy Award nomination for his troubles.

He went one further when playing the title role in Doctor Zhivago, winning the Golden Globe for Best Actor in a Motion Picture Drama.

He pitched himself to Mr Lean, and was cast in the lead role of Yuzi Zhivago — a poet and physician.

The film was a huge hit and, after adjusting for inflation, it remains one of the top-ten highest grossing films of all time.

Omar Sharif ‘got into trouble’ during racy weekends with Peter O’Toole (Image: GETTY)

In a career that lasted right up until his death in 2015, Sharif played the romantic leads in a host of hugely successful films.

The Hollywood heartthrob set pulses racing on screen, and kept up that persona off-screen, if a throwback interview with his grandson is anything to go by.

Speaking to The Mirror in 2017, Omar Sharif Junior recalled the friendship his grandfather had with Mr O’Toole.

The two first crossed paths in Lawrence of Arabia, and after wrapping up the day’s filming they would scurry off to the Beirut bars, or retire to their hotel rooms.

But these were not just any hotel rooms ‒ their bathtubs were filled with champagne and glamorous women flown in from abroad.

“They were always sharing stories and reminiscing. And Peter told me all about what trouble they got in out there.”

He added: “He told me about who was flown in to pleasure whom. They were filming in the Jordanian desert for 18 months, so that’s what David Lean prepared for them.”

Peter O’Toole and Omar Sharif on the set of the film ‘Lawrence of Arabia’. (Image: GETTY)

Filming for Lawrence of Arabia first began in May 1961, not finishing until the end of September the following year.

It premiered at the Odeon in Leicester Square on December 10, 1962.

Mr Sharif Jr continued: “He either flew the women in or flew them out for their weekends. I’ve heard a million of these tales.

“Though I love hearing them about other people, you don’t really want to hear about your grandad’s sex life. But he was always very open when it came to sharing them.”

Mr Sharif, according to The Mirror, had been picked for Lawrence of Arabia solely on his dashing looks.

He was married to Egyptian actress Fatem Hamama from 1955 until their divorce in 1974, though Mr Sharif Jr did not know if his grandfather’s escapades were the reason why the marriage failed.

One film in which Fatem needn’t have worried was Dr Zhivago. Sharif’s opposite in the film, Lara Antipova, was played by Julie Christie.

The British actress’ love of fried egg sandwiches took Sharif by surprise, and proved something of a turn-off.

Mr Sharif Jr said: “My grandfather told me he’d come from Egypt and had never seen a sandwich before.

“But Julie would just pull them out of everywhere. He was like, ‘Where are these coming from?’.

“Between virtually every take she’d pull one of these sandwiches out. Then she’d have crumbs all over herself and when it came time to kiss her, she’d have this sandwich breath.

“She was gorgeous but he’d say, ‘What’s with this sandwich girl?’ That’s what he called her, the Sandwich Girl.”

Doctor Zhivago airs on BBC Two on Tuesday at 1:50pm.