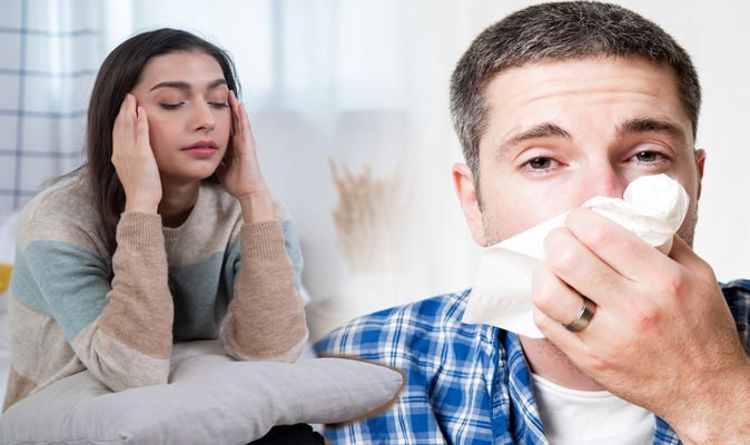 With winter officially upon us all, many Britons are coming down with seasonal colds. Every winter there is a rise in common colds and other respiratory infections. But how can you know if it’s more than just a cold you have?

Epidemiologist Professor Tim Spector said: “The majority of people testing PCR positive have cold-like symptoms, and they do not have the classical triad of the old COVID symptoms of fever, loss of smell and taste, and persistent cough.”

He added it will look “just like a severe cold to many people”, with the majority of symptoms similar to a common cold, including headaches, sore throat, runny nose, fatigue and sneezing.

Professor Irene Petersen, a professor of epidemiology and health informatics at University College London (UCL), said: “A runny nose and headache are symptoms of many infections, but may also be the first symptoms – and only symptoms – of Covid.

“Therefore, if you have these symptoms, I’d encourage you to use lateral flow tests (LFT) for a couple of days.”

The main Omicron symptoms being reported include a stuffy nose, sore head and a sore throat.

According to the NHS, the symptoms of a cold can come on gradually, and include:

Professor Tim Spector previously appeared on This Morning to clear up any confusion.

He explained to Holly Willoughby and Phillip Schofield: “Many people – perhaps up to half of cases – are going unrecognised because they basically have symptoms that are very cold-like.

“So, headache, sore throat, runny nose, sneezing – and the only one that gets into the top five is loss of smell or taste.

“We’re now seeing that fever is very low down on the ranking of what we’re seeing at the moment. Even rarer are things like shortness of breath or a persistent cough.

“It’s a combination of factors but we’ve got to face the reality which is, most people out there with Covid are presenting with cold-like symptoms.”

Just because the Omicron variant is mild, it does not mean a person should let their guard down.

A recent World Health Organisation (WHO) report suggests that the new COVID variant is spreading at an unprecedented rate.

According to WHO chief Tedros Adhanom Ghebreyesus, “the reality is that Omicron is probably in most countries, even if it hasn’t been detected yet.”

“Omicron is spreading at a rate we have not seen with any previous variant,” he added.

Omicron symptoms: Signs indicating it’s more than just a cold you have – experts weigh in

Vitamin D deficiency: How much to take and how to know...