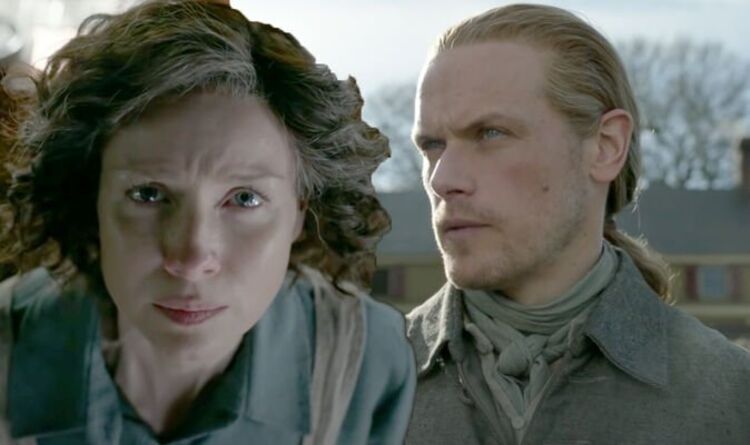 Claire Fraser (played by Caitriona Balfe) was heartbroken when she discovered Malva Christie’s (Jessica Reynolds) body in the Fraser’s vegetable patch. Malva had been pregnant, claiming it was Jamie Fraser’s (Sam Heughan) baby, in a double blow for Claire. With the latest episode ending with Malva’s death, fans are desperate to find out who killed her.

Unfortunately for fans of the Starz series, they have to wait two weeks for episode seven.

The episode, titled Sticks and Stones, will not drop on Starz and StarzPlay until Sunday April, 24.

Fans have already expressed their despair over the short wait with many commenting on the latest promo.

User Rotemgreshler commented: “We have to wait two weeks for this,” while Vanessa Vargas asked: “What do you mean two weeks?”

User sasa65 added: “Nooop omgggg they can’t do that to us!!!” (sic) while PartB explained: “Mid season finale usually came with a weeks pause.”

The trailer for the next episode confirms the mystery around Malva’s death will be the focus with all fingers pointing at Claire.

Just moments after Claire has tried to save the young woman and her unborn baby, Tom Christie (Mark Lewis jones) remarks: “Your wife stands before us up to her elbows in blood.”

Allan (Alexander Vlahos) adds: “With a knife,” as Jamie hits back: “What are you implying lad?”

“Lizzie have you seen the Beardsleys anywhere?” he asks, as the young woman despairs: “Surely you don’t think they could have…” before her expression drops in horror.

Could the twins be revealed to have had a secret affair with Malva and not wanting to take care of her and the child, decided to kill her?

Fans have been quick to question who will be revealed as Malva’s killer with Maranda Darcey posting: “If I didn’t already know who did it I’d think it was Claire.

“She saw Malva, took ether, threatened Malva in a dream state with a scalpel, woke up and proceeded to go to almost the exact spot where Malva’s body lay with her throat slit. If I was Claire I’d be worried that I did it.

“Sure there’s the fact that she has no blood on her but she could have easily washed and changed before waking fully.”

Susan Adams Fields added: “If you have read the book, you know who did it. We shall see who they blame in the series.”

Michelle Monk-Hess shared: “I think her brother or father had killed her because she ruined disgraced her family and he wants everything that Jamie and Claire have built together.

“I hope the last 2 episodes are going get a lot better.I love this show but the season is not the best..”

Outlander season 6 continues on Starz in the US and StarzPlay in the UK on April 24.