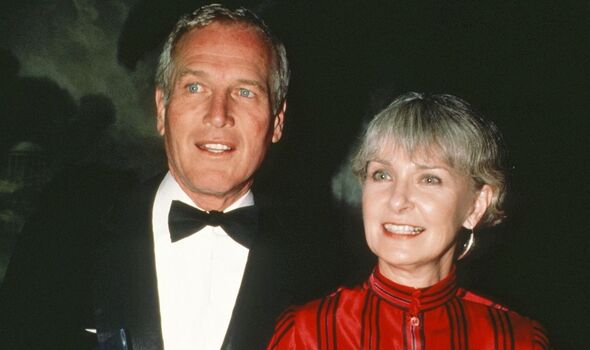 Paul is one of the stars of Butch Cassidy and the Sundance Kid, which airs this morning on ITV4 at 10:50am. The iconic western sees beloved Hollywood duo Paul and Robert Redford team up to play the eponymous leaders of a band of outlaws, named Butch and Sundance respectively. In a time when the West is becoming civilised, the bandits have made a name for themselves robbing banks and outwitting law enforcement.

Yet, all goes wrong when Butch and Sundance make an audacious and failed attempt at robbing the Union Pacific railroad, and are forced to go on the run.

The protagonists try to escape to Bolivia accompanied by Sundance’s lover Etta Place, though a violent posse is hot on their heels.

‘Butch Cassidy and the Sundance Kid’ is one of Paul’s most critically acclaimed films, and helped cement his place as Hollywood royalty in the Sixties and Seventies.

Away from the camera the ten-time Oscar nominee was in a high-profile power couple alongside his wife of 50 years Joanne, one of the stars of Hollywood’s golden age.

Read More: Elvis affair with Ryan O’Neal’s wife ‘The King got me pregnant’

Paul Newman was “guilty as hell” after having an affair while in his first marriage (Image: Getty)

Butch Cassidy and the Sundance Kid airs this morning on ITV4 at 10:50am (Image: Getty)

Their partnership became such an institution that it is often forgotten that Paul had been married before, and that he had broken up the marriage in circumstances he was ashamed of for the rest of his life.

According to biography ‘Paul Newman: A LIfe’, when asked about his first wife Jackie Witte, Paul gingerly said: “I was probably too immature to make a success of my first marriage. What happened to us during that period is nobody’s business.

He did however confess to being “guilty as hell” adding: “And I’ll carry it with me for the rest of my life.”

Paul, who was then just a 24-year-old Navy veteran, married Jackie, who was 19 at the time.

Paul and Joanne were one of Hollywood’s most iconic couples (Image: Getty)

The couple were married for nine years and had three children together.

Yet while Paul was said to have been happily married, when he began making inroads into the world of acting he met Joanne, and was instantly struck by her good looks.

According to Shawn Levy’s biography of the actor Paul initially said: “She was modern and independent, whereas I was shy and a bit conservative.

“It took me a long time to persuade her that I wasn’t as dull as I looked.”

Paul and Joanne were getting closer while working on Broadway (Image: Getty)

Joanne allegedly saw Paul as nothing but a “pretty face” during their first encounter, while she also thought little of his acting.

Meanwhile at home there was tension between Paul and his wife Jackie, who was becoming increasingly frustrated raising the children while Paul spent his days working in Manhattan.

In the biography a friend of the couple claimed: “When she had her children, Jackie lost her interest in acting and in the world that meant everything to Paul.

“His nature is shy and retiring while Paul’s is gregarious. He likes late gatherings of writers and actors as did Joanna.

Paul and and Joanne stayed together for five decades (Image: Getty)

“Paul and Joanne were two highly attractive people with a deep mutual interest and an obvious feeling of companionship. But you seldom saw Jackie.”

Jackie is said to have been suspicious of her husband, with Paul and Joanne becoming closer while working on Bradway.

Joanne once recalled: “Paul and I were good friends before we were lovers. We really liked each other.

“We could talk to each other, we could tell each other anything without fear of ridicule or rejection. There was trust.”

According to Mr Levy’s biography soon their friendship became an affair.

Finally Paul plucked up the courage to ask for a divorce, which Jackie was initially unwilling to go ahead with, until her husband was cast alongside Joanne in ‘The Long, Hot Summer’.

The divorce ultimately went through and Paul and Joanne struck up one of the most high-profile relationships of the Hollywood golden age.

‘Paul Newman: A Life’ by Shawn Levy was published in 2009 by Aurum Press. You can find it here.

Watch Butch Cassidy and the Sundance Kid on ITV4 at 10:50am.

Paul Newman ‘guilty as hell’ over affair with Joanne Woodward: ‘Carry it for rest of time’