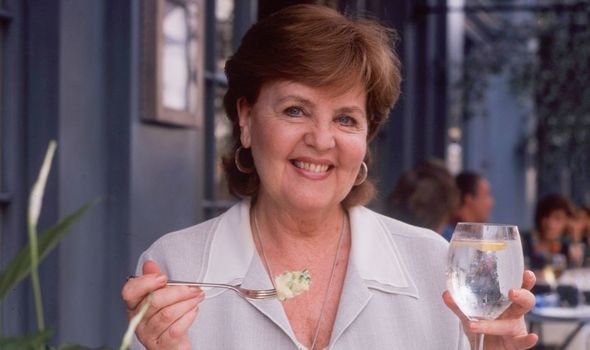 Pauline Collins is easily one of the finest actresses this country has ever produced. She has played warm, loving characters for the best part of 60 years. From Sarah in ‘Upstairs, Downstairs’ to Clara in ‘No, Honestly’, she played a multitude of roles — but none had quite been enough to give her that big break. She had to wait until she was nearly 50 for that to come, but it was worth the wait.

Pauline played the title role in the 1988 play ‘Shirley Valentine’, as well as the film version the following year, and won a BAFTA for Best Actress, as well as receiving Golden Globe nominations for her work.

Shirley Valentine airs on Channel 5 on Wednesday at 9pm.

She continued to star in a range of other films after this, but never quite reached those dazzling heights again.

Yet, prior to her Hollywood success, she had not had an easy ride.

Her life changed unimaginably in 1963 when she was just 23.

READ MORE: ‘Important to give him freedom’ Pauline Collins on secret to marriage

Pauline Collins heartbreak as she was forced to give up baby girl for adoption (Image: GETTY)

As a young and struggling actress in Killarney, Ireland, she discovered she was pregnant by a boyfriend whom she had recently split from.

Despite knowing that her parents would support her, she kept the pregnancy a secret.

Pauline took herself to a convent, where nuns delivered the baby.

She looked after her daughter, named Louise, for six weeks, before giving her up for adoption.

In 1992, she published a memoir entitled ‘Letter to Louise’ — a heartbreaking recollection of the years that led up to this life defining-moment.

Pauline shot to stardom with the title role in Shirley Valentine. (Image: GETTY)

Speaking to the Chicago Tribute at the time, she explained why she came forward after so long.

She said: “The story broke in the English press, which I suppose was inevitable.

“So it was flashed all over the papers for a while. Six months later I was approached by someone who said they were writing my story.”

The story in question was not the life of Pauline Collins, but instead a book on the adoption.

She added one reporter was “more serious than the other”.

She continued: “She was very nice but I didn’t want it to be sensationalised. It’s such a precious thing to me.

“It’s so personal. And I don’t think even I knew how personal it would be until I started doing it.

“I thought, ‘Well, anybody can write about you.’ The best defence against it is to do it myself.”

The book provides a poignant, yet sometimes funny, account of the weeks and months leading up to giving up her baby.

Some of the most emotional passages come when Pauline is in the convent with other girls in similar situations.

Pauline’s story had a very happy ending after years of heartache. (Image: GETTY)

She wrote to Louise: “I remember the last time I saw you. We were about six feet apart… Every day of my life, I’ve relived that moment, replayed each second like a book of flicker pictures, clinging frame by frame to the last images of you.”

She asked: “Why did I give you away? Now in 1992, I still feel a blow in the solar plexus when I consider that question.

“I feel as if my soul is punched out through my throat. Now in 1992, I cannot understand why I did that terrible thing, why I didn’t look harder for another solution.”

Pauline, 81, did not tell her own parents about what had happened until five years after she gave Louise up for adoption.

She told the Chicago Tribune: “They felt very let down because I hadn’t been able to confide in them, although they understood that I did it for what I then thought were good motives.

“I mean, really stupid motives — trying to protect everybody.”

Pauline’s story had the ultimate happy ending, though. When Louise was 21, she contacted her mother. She had been told by her adoptive parents while growing up who her birth parents were.

Louise did not hold anything against Pauline, instead just wishing to meet.

Pauline said in 1992: “She’s been quite extraordinarily mature and compassionate towards me. Even in her first letter, she gave me the option of not replying, which I think at 21 is very mature.”

After the first meeting, Pauline explained they “slipped back into each other’s lives” with “unbelievable ease”.

Shirley Valentine airs on Channel 5 on Wednesday at 9pm.