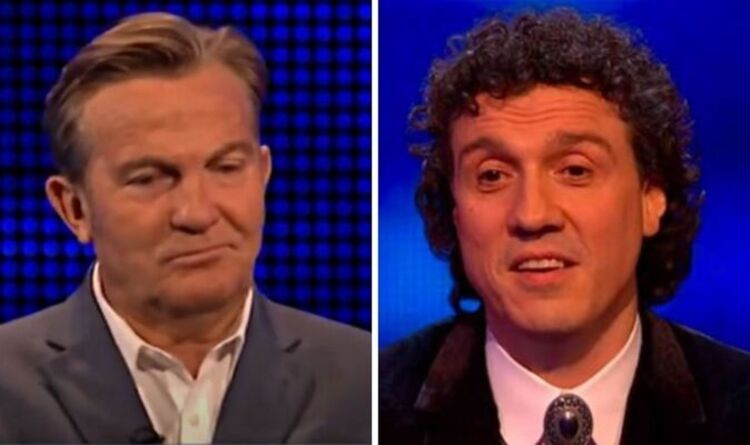 Loyal fans hoping to see favourite Darragh take the stage on the most recent instalment of ITV game show The Chase didn’t hold back in venting their frustration over the baffling absence, with one admitting they were: “P***ed off.” After host Bradley Walsh introduced Jenny as the Chaser, many viewers asked where 41-year-old Darragh was and even claimed ITV “don’t like him”. However, the quizzer has addressed their fears.

The latest episode of the popular quiz show saw contestants Katherine, Ore, Sinclair and Cammy hoping to collectively defeat one of the professional quizzing experts.

However, rather than watching as the contestants got stuck into their questions, a lot of people tuning in at home were left distracted.

Their attention was firmly on Darragh and the fact he hasn’t been on the series for a long time.

Twitter user @Belothie shared: “I miss The Menace! Where is he? #TheChase.”

@Miss_Vix88 echoed this, raging: “P***ed off it’s not Darragh though #thechase.”

Megan Taylor commented: “If I went on The Chase I’d 100% want to go up against Darragh.

“He’s my favourite chaser (besides Shaun) and he has a background in Neuroscience, my biggest interest since having a baby with Hydrocephalus #thechase.”

However, fans seem to think Darragh has barely made an appearance in recent instalments.

New episodes began to air this week, and since then many have been hopefully switching onto ITV to see if their wish has been granted.

Unfortunately, they’ve been left scratching their heads as The Menace remains nowhere to be seen.

Seeming to recognise this, Darragh took to Twitter to address peoples’ complaints, sharing The Chase’s official announcement about new episodes and writing to his 26,000 followers: “Ok, you’ve all been pestering me so now you know. New Episodes of #TheChase on @ITV at 5pm.”

Keen fan Elaine Stokes replied to his post, asking: “Where was you today? Was awaiting your return to the chase.” (sic)

Darragh replied to her question, writing: “I was at work,” before the eager viewer asked the next day: “Are you on TV tonight?”

“Tune in to find out,” the Chaser teased, however, it seemed the answer would be no as Thursday rolled around with no sign of the favourite.

‘P****ed off!’ The Chase fans fume as Darragh Ennis absent again ‘Where is he?’