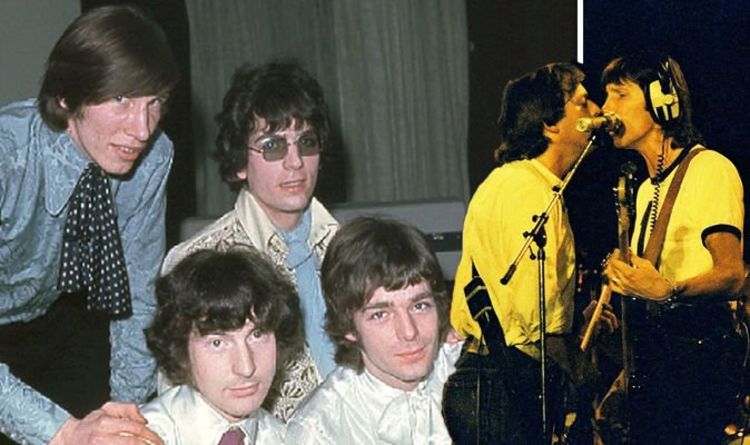 Pink Floyd members: Who were the first members of Pink Floyd? Inside band departures

Pink Floyd has been around for a long time, despite the group not performing together since 2014. Each member has performed his own solo work, most notably frontman David Gilmour. However, David may not have been around when the band started – so who were the founding members?

However, before the band officially began and was crowned Pink Floyd, guitarist Bob Klose also worked alongside Syd in the early years.

He quit the band in mid-1965 before the band had truly found its sound, so while he is credited with being in the band, he is not considered a founder.

Only two years later and after their debut album, David Gilmour joined the group.

David was a guitarist, like Syd, and was brought on to support Syd with his performances.

Syd struggled with mental health issues throughout the band’s early years and fame, and it was believed this is part of the reason David was brought in to support him until eventually, he left the band in 1968.

At this time David became the lead vocalist for the band, as well as the guitarist, and the band remained a four-piece for some time.

According to Nick’s book, Inside Out: A Personal History of Pink Floyd, Richard was next to go from the band, who left in 1979.

This was during the recordings for The Wall, and Nick claimed Richard’s departure came because he was fired for his lack of contributions.

Nick said Richard would spend recordings “without doing anything, just ‘being a producer.’”

This seemed to be a theme with some of the band members and their departures which followed, as according to Mark Blake’s Comfortably Numb: The Inside Story of Pink Floyd, Roger felt similarly towards David in later years.

Eventually, tensions forced Roger to leave in 1985, which Nick discussed in an interview with Rolling Stone in 2018.

He said: “It’s a really odd thing in my opinion. But I think the problem is Roger doesn’t really respect David.

“He feels that writing is everything, and that guitar playing and singing are something that, I won’t say anyone can do, but that everything should be judged on the writing rather than the playing.

“I think it rankles with Roger that he made a sort of error in a way that he left the band assuming that without him it would fold.

“It’s a constant irritation, really, that he’s still going back to it. I’m hesitant to get too stuck into this one, just because it’s between the two of them rather than me.

“I actually get along with both of them, and I think it’s really disappointing that these rather elderly gentlemen are still at loggerheads.”

When Roger departed the group in 1985, he launched a lawsuit against his bandmates over the use of the Pink Floyd name.

According to Glen Povey’s Echoes: The Complete History of Pink Floyd, Roger invoked the Leaving Member clause in his contract, after which he sought to dissolve the Pink Floyd partnership, which was opposed by Nick and David.

He reportedly claimed to have been told to resign from the band, and eventually a settlement was reached, which allowed the continuing members to use the name Pink Floyd, while some concept rights reverted to Roger.

However, years later, Roger admitted he regretted suing his band, telling the BBC: “I was wrong. Of course I was…

“It’s one of the few times that the legal profession has taught me something.

“Because when I went to these chaps and said, ‘Listen, we’re broke, this isn’t Pink Floyd anymore,’ they went, ‘What do you mean? That’s irrelevant, it is a label and it has commercial value.

Since then, Nick and David continued working until the band went on what turned out to be a hiatus in 1994.

In 2005, Roger, Nick, Richard and David performed at Live 8, after which the whole band did not reunite at any other time.

In 2006 and 2008 respectively, Syd and Richard died, and while other members have released music, some using the Pink Floyd name, the surviving members have not reunited since Live 8.

The Voice’s ‘JessLee’ Is Back With a Brand New Sound