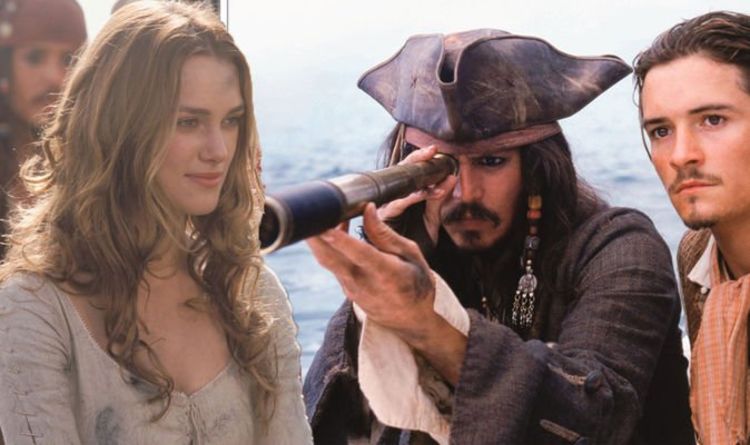 When Pirates of the Caribbean hit cinemas in 2003 cinemagoers were thrilled. The swashbuckling adventure movie hit the top of the box office and sparked a Disney franchise that has, for now, produced four sequels, with scope for more. But one scene left Disney executives concerned about how the film would be viewed.

During the events of the first Pirates film Knightley’s character, Elizabeth Swann, was captured by Captain Barbossa on The Black Pearl.

After swapping pleasantries, Barbossa’s two lackeys, Pintel and Ragetti, told Swann she could attend dinner with the Captain, but there was a catch.

In order to eat at the Captain’s table she would be forced to wear a dress he provided – or wear nothing at all.

The young captive agreed to wear the dress, but the scene that directly followed was axed from the final movie.

READ MORE: ‘Unbelievably awkward!’ Johnny Depp was not happy with one POTC scene

The scene showed Swann getting undressed and into her new frock to attend the dinner. On the other side of her door, Pintel and Ragetti stared at the young woman getting changed while giggling to themselves. (Via ScreenRant) The pair took great pleasure in cackling to themselves as they watched Swann take off her clothes – but it didn’t last long. After noticing the two pirates acting perversely, Swann attacked the peephole.

After the movie came out, Depp recalled how uncomfortable the kissing scene was.

He said: “Any kind of scene like that whenever you’re doing that sort of thing, it’s always unbelievably awkward, especially having met Keira when she was 17 years old.”

Depp went on to add that, despite how awkward it was, the scene turned out okay.

He said: “But regardless of that it’s always awkward, so you kind of just making light of it. She was a good sport and we just kind of did what we had to do, that’s the gig.”

Knightley herself was quite pleased with the scene. She said: “I couldn’t ask for a better kissing scene with Johnny Depp actually. I think my 14-year-old self was yelping with pleasure. It was fantastic! What more can a girl ask for? I’ve got Johnny Depp and Orlando Bloom and I get to kiss both of them. It’s wonderful!”