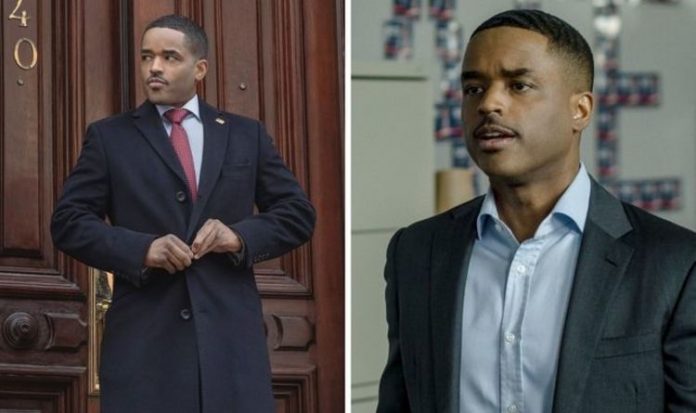 After briefly appearing in season one of Starz’s hit crime show, the highly anticipated second series brought back the defeated politician, Rashad Tate full-time. Ahead of the return of Power Book II: Ghost, Express.co.uk spoke to actor Larenz Tate, who revealed why he wanted to portray the character.

Rashad Tate (played by Larenz Tate) was initially introduced in the original series of the Power franchise as the power-hungry politician who suffered a bitter defeat at the hands of James ‘Ghost’ St Patrick (Omari Hardwick).

“So let me tell you a quick story,” Tate began to Express.co.uk when asked about his role as Rashad Tate.

“I am really good friends with Omari Hardwick from the original Power, 50 Cent (executive producer) and I had been trying to find a way to work together.

The actor explained: “I got a chance to meet Courtney Kemp and I was a big fan of the show.”

Delving into season original Power, where fans first saw the evil side of the politician, Rashad unveiled: “I was supposed to play Terry Silver, who was Ghost’s lawyer and then falls in love with the character Tasha.

“I was away working, I couldn’t do it, it didn’t happen,” instead Brandon Victor Dixon took on the role.

“I felt bad and I was like, I want to be on that show. I felt good but I felt bad that it didn’t work itself out.

“I called up the creator of the show, Courtney Kemp, and I said, ‘Listen, whatever you need I’m down, I’m saying we’ve got keep this black excellence going – let me know, don’t worry about agents and managers, I’m calling you I’ll do the show one episode’.”

Larenz shared Courtney’s response: “She said ‘it’s interesting that you call because I got more than one episode, I have four episodes in season four – are you available, it’s going to be a politician. His name is Rashad and his last name is going to be Tate’.”

“I was like ‘sign me up, I’ve already got the last name, that works and I want to be on the show’.”

Reflecting on his season one portrayal, Rashed shared, “The fact that I was able to get in and work with them, I didn’t know what to expect and they gave me a safe space to kind of create.

“Once they saw my interpretation of who this Councilman was – he’s a guy that comes in with a smile, he’s high fiving, but he can totally change.

He continued: “I was like, ‘Yo, let me do me,’ because I was going with the flow of it all and they began to write to that, then they invited me back for season five.”

Revealing what it was about Rashad, Tate was interested in exploring: “duality, especially someone who’s in politics, he’s a guy who comes from a good family, good pedigree, good stock, but the fact of the matter is, he’s in politics.”

“What I’ve learned is, we’ve kind of seen it – politics is a dirty game, very dirty, especially for a brother.

“There are hurdles and roadblocks, all kinds of stuff that you have to deal with, so I was really happy to see how many layers they were able to incorporate in the storytelling for Rashad.”

Throughout the original series of the Power franchise, fans watched as Rashad played the dirty game against James in their race to become Governor of New York.

The final season revealed James won more votes against Rashad, however, he met his demise in the finale.

With James out the way, viewers saw a defeated and depressed Rashad get back on his feet after sleeping on his brother’s couch in the current season of Power Book II: Ghost.

Before the show’s mid-season finale, Rashad turned his sights on education and began teaching a course on Ethics at Stansfield university, where James’ son and murderer Tariq St Patrick (Michael Rainey Jr) was studying.

In the wake of their shocking reunion, Rashad bribed Tariq to use his connections so he could get his foot back into politics, fans will have to stay tuned to find out if his evil plan will work out.

Power Book 2: Larenz Tate opens up on why he chose to play Rashard ‘Politics is dirty’