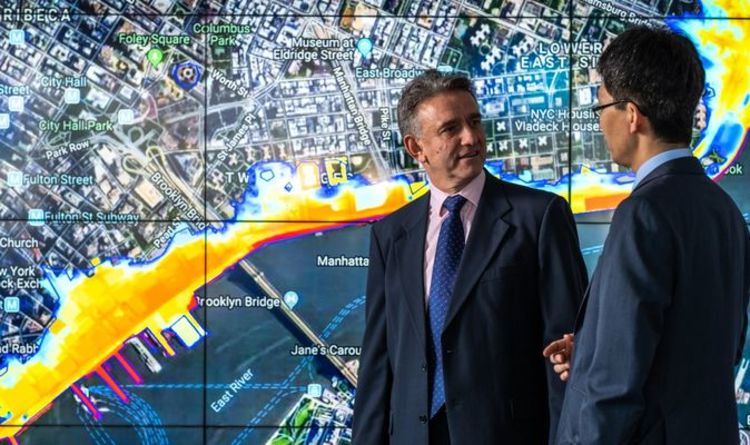 An emerging force in the multi-billion pound insurtech sector, the business pinpoints risks in real time – known as nowcasting – down to property street level and can generate a new forecast every three hours. Other hazards such as hail, wind and snow melt are also covered in its subscription-based service model.

He is predicting a £500,000 turnover for Previsico this year and plans a series A growth funding raise in 2021.

Extreme weather events and climate change generally, as well as spreading urbanisation on unfit land such as flood plains, have been driving factors worldwide for the increase in floods and their devastating aftermath.

In the UK some 40 percent of businesses hit by severe water damage fail to recover.

Previsico’s clients range from the public sector, the Cabinet Office at national level to councils, to insurers and the emergency services, a new emerging sector using precise forecasting to improve response times.

Internationally new clients in Asia are in the pipeline and the US where it has recently launched.

Founded by Loughborough academics and majority shareholders Professor Dapeng Yu and Dr Avi Baruch to fill a gap in the forecasting market, an approach by the Cabinet Office for its modelling expertise led to the spin-out and then its ResilienceDirect service last year followed by its FloodMap Live system.

It now employs 15, integrates precipitation forecasts from IBM’s The Weather Company, and offers a “48-hour forecast across all flood forms and at 25m throughout the UK. We also have a dashboard and alerts service by email or text for property level warnings,” says Jackson.

False alarms are a common experience associated with flood forecasting, but Previsico’s technology significantly reduces that, he explains.

“This reliable aspect of our service has been particularly successful. It enables people to move valuables to safety and put up flood defences to protect property. We can also forecast the small rivers and streams of ordinary watercourses which are not covered by the Environment Agency.”

A £177,000 grant and a £700,000 loan from government-backed Innovate UK have helped build scaleability and expansion and Advantage Business Angels has also invested in the business.

Joining Lloyd’s of London’s Lab accelerator last spring countered Covid setbacks. “It has been a huge help working with underwriters and mentors as we focus on the UK insurance market and as a launchpad for international growth,” adds Jackson.

The company opens a Hong Kong office in the region’s science park next week to further research initially and then cement Previsico’s Far East expansion in an area with serious flood challenges. Funding for this is backed by a US$150,000 grant from the HKSTP innovation support body.

And while Previsico has a commercial imperative, Jackson is acutely aware of the support the company can contribute to disaster relief and humanitarian projects in countries in the frontline of climate change, such as Bangladesh and Kenya.

“This is the most pressing issue of our age,” he says. “Where we can help we will.”

Blazy Susan Takes Creativity And Relaxation To Another Level