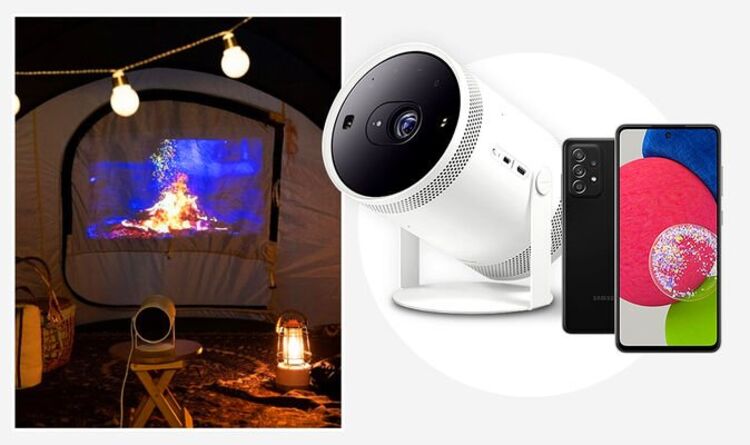 When it comes to freebies, it’s tough to beat a brand-new Galaxy A52s 5G smartphone. But that’s exactly what you’ll find bundled for free when you order Samsung’s new Freestyle projector, which is designed to replace the 4K TV in your living room. The Freestyle was unveiled during the CES tradeshow in Las Vegas back in January, with pre-orders becoming available soon after. And now, the Freestyle is finally available to buy from the Samsung store …but that doesn’t mean the deals have ended. If anything, the latest promotion is the best we’ve ever seen.

For a limited time, anyone who adds the Freestyle to their basket will get a Samsung Galaxy A52s 5G – worth £409 – at no extra cost. This handset only launched back in September last year, so it’s powered by the latest version of Samsung’s One UI version of Android, with a quadruple-camera system, and water resistance up to a depth of one metre.

Freestyle wants to solve one of the biggest headaches of flatscreen 4K TVs – they can be a terrible eyesore when they’re not in-use. When you’ve rented a movie, or are poised to start a new season of your favourite show, you want the biggest possible screen. However, you might not want the same multiplex-like screen when you’re watching the local news bulletin later in the evening, or when the television is switched off. The latter is an issue that Samsung has tried to rectify with its The Frame range of TVs-cum-picture-frames. But the Freestyle is completely different approach to the same issue as this miniature projector can beam content onto any surface both inside and outside of your home.

Samsung says the lightweight Freestyle packs enough power to beam an image from 17 up to a staggering 100inches in size, which should be perfect for anyone who wants a cinematic experience without buying a supersized telly. The Samsung Freestyle also includes some nifty tricks, including a special cradle that allows it to rotate up to 180 degrees – enabling users to show high-quality videos on tables, floors, walls or even ceilings.

There’s also an autofocus feature, so you won’t have to fiddle with any settings to get crystal clear content and auto-levelling is included so things won’t appear wonky. That should solve some of the usual pain-points when watching on a projector, fiddling in endless menus to sort the level and focus. Better yet, Freestyle can be powered directly from the mains or with a battery pack – perfect if you’re planning a trip away from home, but still fancy the big screen experience.

If you’re out-and-about with the Freestyle, you won’t need to worry about traipsing around with HDMI cables to start watching something on the projector. That’s because Samsung has incorporated some of the biggest streaming services, including Netflix and Disney+, directly into the Freestyle projector itself. So, you won’t even need to have a smartphone nearby to begin watching a new series or movie.

If you do have a smartphone in your pocket, it couldn’t be easier to beam content stored on the handset to the Freestyle. Using the SmartThings app available on all Android handsets, or Apple’s AirPlay 2 wireless technology, you’ll be able to mirror your experiences, video, and games without the need for cables. As well as binging on boxsets and watching movies, the Freestyle has plenty of other features, including powerful speakers with a dual passive radiator enabling a clean and deeper bass.

As such, it makes a great portable or home speaker. iPhone or iPad owners will be able to pair the Freestyle with other AirPlay 2-enabled devices in your home, including Sonos and Bose speakers. And that’s not all, the Freestyle can also be turned into a smart ambient light to add some different moods and music to your rooms.

It is also the first projector to include far-field voice control, allowing users to choose their favourite voice assistants – like Google Assistant – when using the device hands-free up to 13ft away.

Freestyle costs £999, which is about on-par with a number of Samsung’s QLED TVs. While those who pre-ordered the Freestyle back in February were gifted with a travel case and a pair of Galaxy Buds Live for free, buyers can now secure a Galaxy A52s 5G smartphone for free. The new promotion, which started on April 6 and runs until May 24, lets Freestyle owners claim a free handset within 30-days after taking delivery of their shiny new projector.

Of course, if you’re already happy with your smartphone, there’s nothing stopping you selling the Galaxy A52s 5G and pocketing the £409, or gifting it to a family member or friend.

If you don’t fancy stumping up £999 for the Freestyle today, Samsung offers a number of competitive payment plans. The South Korean company offers 0% APR repayment plans between 12- and 36-months, with prices starting from as low as £27.75 a month. That’s a pretty affordable way to get your hands on a brand-new projector and a 5G-equipped smartphone.

“The Freestyle is a one-of-a-kind projector geared towards ultimate versatility and flexibility to meet the consumers’ changing lifestyles,” said Simon Sung, Executive Vice President and Head of the Sales and Marketing Team of the Visual Display Business at Samsung Electronics. “Without the limitation in space and form factor, The Freestyle is a fun and versatile device that can be used in any way consumers prefer.”

Ready to ditch your 4K TV? Get Samsung smartphone for FREE when you order new Freestyle