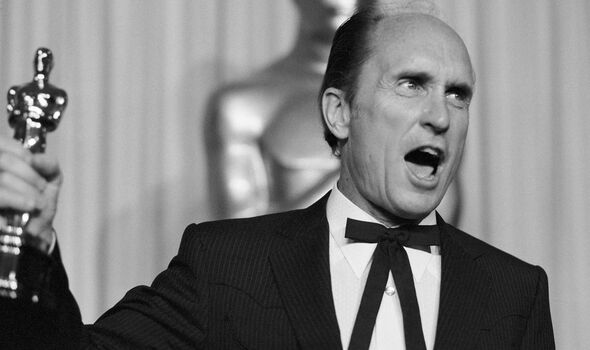 Robert Duvall, Clint Eastwood and John Saxon star in classic Western film Joe Kidd, which airs on Channel 5 this afternoon at 12:55pm. In New Mexico, ex-bounty hunter Joe Kidd (played by Mr Eastwood) owns a ranch where a nearby group of Mexican bandits under the guise of Luis Chama (played by Mr Saxon) fight for their ancestral lands after the US Government denies their claims. Wealthy landowner Frank Harlan (played by Mr Duvall) forms a posse to capture Chama, soliciting Kidd’s assistance to do so.

Despite his initial refusal, Kidd relents upon finding out Chama has stolen a horse and roughed up one of the workers at his ranch.

The film was released in the US in 1972 — the same year Mr Duvall truly shot to stardom in The Godfather, widely considered one of the greatest films of all time.

It was the first of a formidable trilogy of films — yet Mr Duvall never returned for The Godfather III.

Mr Pacino, Ms Keaton and Talia Shire all reprised their roles from the previous two films, but a row over salaries saw Mr Duvall refuse to be involved.

Speaking to CBS about his refusal in 2004, he said: “I said I would work easily if they paid Pacino twice what they paid me, that’s fine.

“But not three or four times, which is what they did.”

Upon Mr Duvall dropping out, the film’s director Francis Ford Coppola rewrote the screenplay to portray Tom Hagen as having died before the story begins.

Instead, he created the character B. J. Harrison, played by George Hamilton, to replace the Hagen character in the story.

Had he agreed to take part, Mr Coppola said Mr Duvall’s Hagen character would have been heavily involved in running the Corleone charities.

Yet Mr Duvall later admitted he had zero regrets over turning the role down, despite the film being nominated for seven Academy awards.

Mr Duvall in the opening scene of The Godfather. (Image: GETTY)

Asked Reuters in 2010 if he had any regrets, 20 years after the third Godfather film was released, he said: “No, because it wasn’t as good as the other two.

“[Mr Coppola] came to my house in Virginia.

“He always wanted my mother’s Maryland crab cake recipe. So I wrote it down for him and we talked about Godfather III.

“Then he left and forgot the recipe.

“He called me more concerned about the recipe than whether I would do “Godfather III!”

While films shot Mr Duvall to stardom, it was TV that made him a cult figure in American showbiz.

His role as Augustus MacRae in Eighties miniseries Lonesome Dove earned him an Emmy Award and a Golden Globe.

He was awarded a National Medal of Arts by President George W Bush at the White House.

Away from his acting career, Mr Duvall is married to Argentine actress Luciana Pedraza — 41 years his junior.

In 1996, while strolling down an Argentine street, she approached him to invite him to a party without knowing who he was.

They have been together since 1997, and worked alongside one another in 2002 film Assassination Tango.

They co-founded The Robert Duvall Children’s Fund to help impoverished children and families of Northern Argentina.

Since then, the non-profit organisation has expanded its reach to assist children and families around the world.

Joe Kidd airs on Channel 5 on Sunday afternoon at 12:55pm.