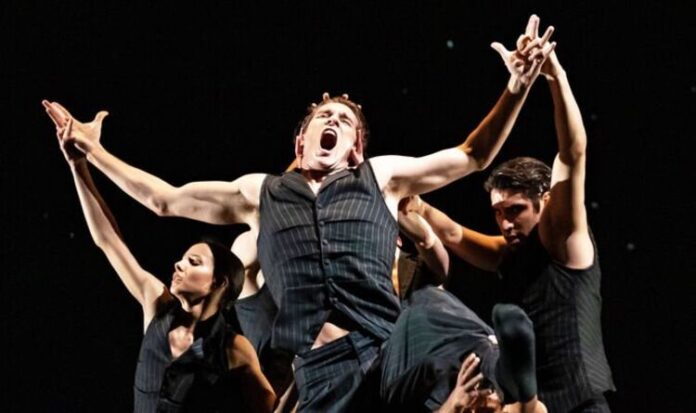 Nobody does grand classical pieces quite like the Royal Ballet, but the company demonstrated it can be just as strong out of tutus during three complex and challenging modern short pieces from three of the world’s foremost modern choreographers. The highlight for me, as so often, is the electrifying Solo Echo by Canadian Crystal Pite, set to cello and piano sonatas by Brahms and inspired by Mark Strand’s poem Lines for Winter. It’s stunning. Movement, music and staging combine to breathtaking effect.

Against a blacked-out stage, tiny twinkling lights endlessly cascade down, their hypnotic delicacy contrasted against the muscular lines created by the six dancers. Pite’s choreography often calls to mind the exaggerated gestures and facial expressions of silent movies, but the lines she creates are powerfully, thrillingly modern.

The dancers, male and female, are uniformly dressed alike in black waistcoats and trousers, with the woman just as central to the creation of dynamic pulls, lifts and shaping. Endlessly reconfigured combinations of bodies create visually dramatic freeze frames in a piece that never stops moving and builds to a deeply moving and melancholy close.

It’s certainly not a complaint, but there is so much to see and to delight, it’s almost too much to take in. An excellent excuse for a repeat visit.

The world premiere of The Weathering by American choreographer Kyle Abraham continues to explore his fascination with the fusion of classical ballet lines with contemporary and hip hop. Across nine movements, the piece is a meditation on loss, illuminated by lanterns glowing on stage, and rising and falling above.

Across solos, duets (dynamically often between the men) and group numbers the lines are always loose and lovely, but the footwork is fiendishly difficult and handled superbly by the company. There is much to admire and the likes of Liam Boswell, Calvin Richardson, Fumi Kaneko and Anna Rose O’Sullivan impressed. However, not much lingered in my mind after.

DGV: Danse à grande vitesse is a bombastic crowd-pleaser. The fact that it rattles along is no surprises since Christopher Wheeldon choreographed it to a Michael Nyman score created to celebrate the launch of the High-speed TGV train line from Paris to Lille.

The backdrop is an abstract train of hammered panels, lit initially in metal hues, later revealed to be transparent. The corp frequently appear behind the sculpture in energetic tableaux, and sometimes climb through it, while four main couples strike grand and sweeping poses.

The choreography is crisp and pleaing, and well-danced, but doesn’t quite reach the visceral heights of the music or the theme.