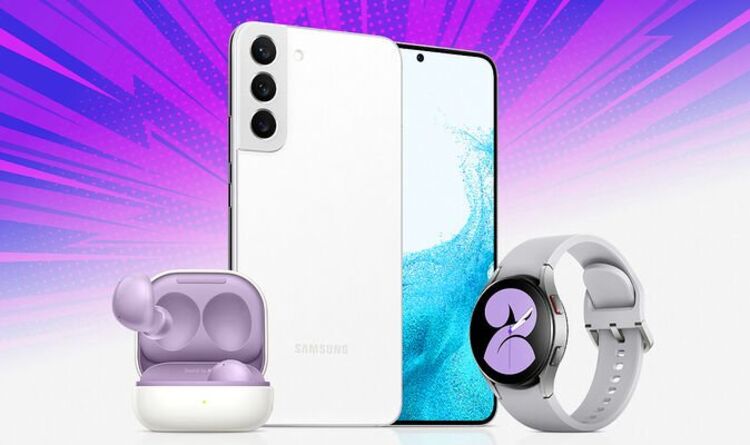 Coupled with the faster Samsung-designed processor, IP68 water-resistant design, 5G mobile data speeds, 8K video recording, fast wired and wireless charging, and stronger glass screen …there are plenty of reasons to want the latest entry in the hugely-popular Galaxy S smartphone series. Fortunately, upgrading to the latest handset from Samsung isn’t quite as expensive as you might fear. There are a number of generous pre-order deals available, including a 50% discount.

Yes, you did read that correctly. UK network Three Mobile is offering a half-price discount on the first six months with your new Galaxy S22. Given that its contracts only last 24-months, that’s a healthy chunk of your total time with the device that you’ll only be paying half the cost.

For the first six months, you can secure a brand-new Samsung Galaxy S22 for just £30 a month.

For that, you’ll enjoy unlimited 5G mobile data, unlimited text messages and calls. That means you’ll always be able to take advantage of the Galaxy S22’s feature without worrying about worrying out of your monthly allowance. Whether you’re backing up high-resolution photos and videos to your cloud storage, streaming the latest must-binge boxset on Netflix with the 6.1-inch AMOLED display – the brightest screen that Samsung has ever shipped on a device, or listening to music from Spotify and Apple Music with your free £219 Galaxy Buds Pro (a freebie available during the pre-order period), you’ll never need to worry about a data limit putting a stop to your fun.

Three Mobile’s half price deal does come with a £29 upfront cost, which is something to consider if you’re looking to minimise the amount that you’ll pay on day one. But when pre-order the Galaxy S22 from Three Mobile, you’ll be automatically be entered into a prize draw with a chance to win one of 22 Samsung-themed prizes, including a Samsung Smart TV and Galaxy Watch 4. So, your home could soon be filled with Samsung goodies!

Whether you decide to pre-order the Samsung Galaxy S22 from Three Mobile, Samsung’s own online store, EE, Vodafone, O2, or any other network… you’ll be able to claim a number of free gifts from Samsung. The South Korean firm is giving away a pair of its Galaxy Buds Pro wireless earbuds with active noise cancellation. Worth £219, these ‘buds will pair instantly with your new handset and allow you to cut-out the sound of the commute and make hands-free calls.

If you order before February 24, you’ll also be treated to a one-year subscription to Disney+ free of charge.

Elsewhere, O2 is dropping the charge for your 5G data, calls and text messages for the first three months of your contract with the Galaxy S22. That means, for the first three months, you’ll only pay the cost of the handset – just £20.50 a month. For that, you’ll enjoy 50GB of 5G mobile data, unlimited text messages and unlimited calls. O2 also offers a six-month free subscription to Prime Video, Amazon Music, Apple Music, Audible or McAfee. You’ll also benefit from O2’s Priority reward scheme, which includes free coffee and lunches from a number of high street chains as well as early access to buy tickets for some of the biggest gigs in the UK before everyone else.

After the three-month promotional period, you’ll be looking at paying £46.50 a month for the latest handset from Galaxy S22.

LG will give you a free Xbox Series S when you...