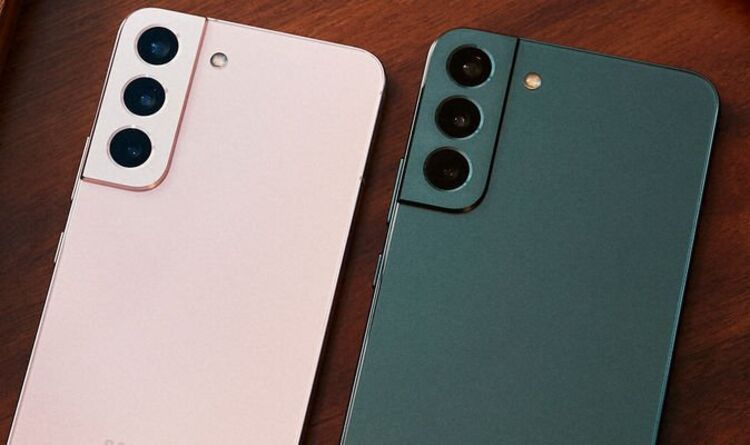 Samsung Galaxy S22 is finally here. After months of rumours, Samsung unveiled its latest flagship handset during its latest Galaxy Unpacked event. The new handset boasts improved cameras, a faster processor, and a refreshed look which is now more eco-friendly thanks to the use of discarded fishing nets in its design.

There are three handsets in the Galaxy S22 range to choose from, including the standard Galaxy S22, the larger Galaxy S22 Plus, and the ultimate Galaxy S22 Ultra, which features an S Pen stylus tucked inside its aluminium shell and a massive 6.8-inch screen to scribble your notes on. You can read all about the Samsung Galaxy S22 Ultra here.

With a price tag of over £1,100, the Galaxy S22 Ultra is the handset for those who want the ultimate Samsung smartphone. If that sounds like a little too much for your wallet, don’t panic! The Galaxy S22 and S22 Plus, which start from just £769, offer plenty of reasons to upgrade.

Firstly, Samsung has refined the design of last year’s Galaxy S21 with the new S22 and S22 Plus getting a sleek and polished finish to the case. The camera bump still blends seamlessly into the sides of the phone, but the design appears more premium and worthy of its flagship status.

Those who opt for the standard Galaxy S22 will be treated to a 6.1-inch AMOLED screen, while Galaxy S22 Plus users get a bigger 6.5-inch display. Both of these screens feature a speedy 120Hz refresh rate for super-smooth scrolling and when playing games, the touch sampling rate can also be boosted to 240Hz which should make a gun-blasting session on Call of Duty feel way more fluid.

Unlike the Ultra – which has a curved screen – the S22 and S22 Plus both have a flat panel that pushes right to the edges of the chassis for an almost bezel-free viewing experience.

Spin these phones around and you get a triple rear camera with the usual ultra-wide, wide and telephoto lenses. This snapper can’t match the 108-megapixel technology and quad camera on the S22 Ultra, but Samsung is still promising a big boost to photography this year.

That’s all thanks to improved sensors and better AI capabilities from the new Exynos 4nm processor which is tucked under the shell. Combined, these upgrades should make night shots look brighter and effects such as Portrait Mode appear even more like they’ve been shot on a DLSR.

If your big concern is battery life, the new Galaxy S22 should power you through a day and there’s the usual fast and wireless charging to help boost things back to full.

Other features worth a mention include an ultra sonic fingerprint scanner under the screen for speedy unlocking, a water-resistant design and full access to 5G data speeds.

If all that has got you excited then the S22 starts from £769. The Galaxy S22 Plus starts from £949. Both new handsets phones come in Phantom Black, Phantom White, Pink Gold and Green.

If you pre-order these all-new smartphones ahead of launch, you’ll unlock 12-months of Disney+ for free as well as Samsung’s Galaxy Buds.

Kodi is breaking your addons with some major changes to its...