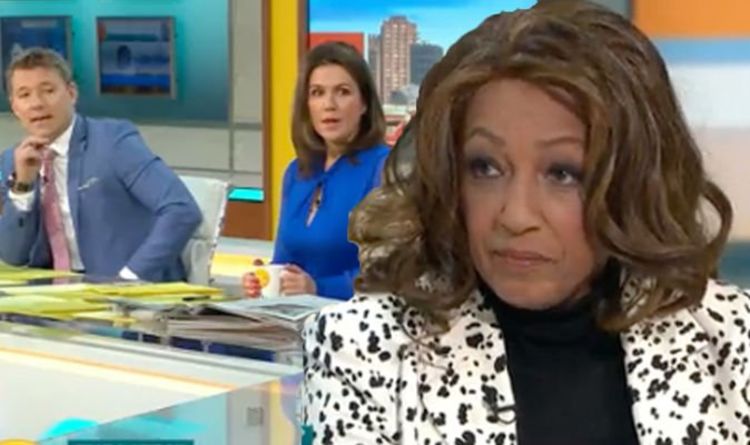 Good Morning Britain welcomed Sheila and Tina Turner tribute act Dorothea ‘Coco’ Fletcher to debate whether tribute acts are image appropriation and it was clear both strongly disagreed with one another. Sheila told hosts Susanna Reid and Ben Shephard she felt so strongly, she took out an injunction on someone who impersonated her. Her comments about the tribute act sparked outrage when she compared them a dog.

Sheila began: “The vocals aren’t as good as Tina, number one.

“Impersonating Tina Turner is a no, no, that’s number two.

“She went to Ibiza, I put out an injunction. Nobody has seen her ever since.

“Nobody impersonates me. I had to force that. [Tina] can afford to sue her.”

Ben interrupted: “Dorothea, let’s go to you. We’ve just seen a bit of you performing, and clearly as you can hear from Sheila, who has had personal experience of having an artist impersonate her as well, it’s very emotive and frustrating.

But it was Sheila’s comment about a tribute act to her, which left viewers horrified.

She remarked: “I didn’t like having a tribute act because she was ugly, she looked like a dog.”

Taking to Twitter to comment, Ellie Lou posted: “Wowwww Sheila Ferguson is a nasty old woman isn’t she. “I didn’t like having a tribute act because she was ugly, she looked like a dog” #goodmorningbritain.”

Paul Spencer tweeted: “Chill out @SheilaDFerguson this woman is putting on a show & you come across as aggressive towards her, fair ply you chilled a bit through the interview but it felt like an attack.”

Andrea Berry added: “Oh my goodness what an unpleasant woman Sheila Ferguson seems to be. Some people can only afford to see tribute acts! This Tina Tuner tribute singer is great. Get over yourself Sheila.”

Others explained tribute acts were the only way they could celebrate the music of singers like Sheila and Tina.

Debbie argued: “Make concert tickets cheaper then not everyone can afford £50 to 200 quid ……and are these stars jealous or something of these younger acts.”

Miss Tams added: “Exactly what I said. If Tina came out of retirement and did a string of gigs we all know tickets would be a few hundred a pop.”