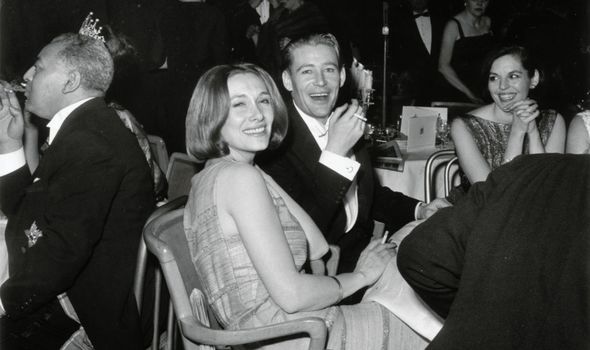 Peter O’Toole is greeted by Sian Phillips in a scene from the film ‘Goodbye Mr. Chips’, 1969. (Image: Metro-Goldwyn-Mayer/Getty Images)

For 20 years Dame Siân Phillips fought to preserve her turbulent relationship with screen icon Peter O’Toole. In Saturday’s Daily Express, she revealed the devastating toll his drunken, controlling behaviour took on her life. But, as she explains today, his move from theatre leading man to Hollywood A-Lister would destroy their marriage completely.

When Peter O’Toole was cast as the lead in the David Lean epic, Lawrence of Arabia, he became the hottest young property on two continents. His long-suffering wife Siân Phillips, well versed in playing the compliant partner, watched with dismay as their entire existence was turned upside down.

“Before the film was even finished, our lives had changed utterly,” she says today.

“Columbia Pictures pumped millions of dollars into his publicity. We were invited everywhere and there were daily requests for interviews and photographs.”

But she quickly discovered that Mrs O’Toole, the Hollywood wife, was treated very differently from Miss Phillips, the British actress. People jostled her out of the way in their desire to get to the new leading man. For the most part she accepted this with equanimity, but she did object when “little Gina Lollobrigida” actually drove her stiletto heel through the soft arch of Siân’s foot in her hurtling frenzy to say hello to her wonderful husband. “Mind you, she was drunk as a skunk,” she points out.

By this time, O’Toole was more magnetic than ever. During filming in the Middle East, he’d been forced to drastically reduce his alcohol consumption because it was impossible to work in the extreme heat with a hangover. When Siân first flew out to Jordan to join him on location, she was immediately struck by the change in him.

“He looked extraordinary, a thousand times fitter and healthier than he’d ever looked. His eyes were clear, his curly black hair had been straightened and bleached blond, and for the first time in his life, he was tanned. He looked – I couldn’t quite think what he looked like. Then it came to me. He looked like a movie star.”

She wasn’t the only woman who noticed the changes.

“On our return to London, women behaved very badly,” she says with a wry laugh.

“If you want to know about the poverty of the sisterhood, get married to a famous movie star. I was shocked. And he was shocked, too – to the core. We’d be sitting in a restaurant and a waiter would come over with a note saying, ‘Here’s my phone number. I’m sitting to your left.’ O’Toole would say, ‘I don’t believe it.’ He used to give me all these things to take care of. He was very good. I never had to worry about his faithfulness.”

It even claimed he’d shared a bath with Princess Margaret and that Audrey Hepburn had miscarried his child after a steamy fling.

Siân dismisses the allegations without a hint of concern. “It was ridiculous. None of it was true. The writers never interviewed anybody. They just took National Enquirer headlines and sliced them up. It wasn’t a worry to us [the family] because our lawyer said, ‘Never explain, never complain.’

“Besides, O’Toole knew if he’d been unfaithful I’d have dropped him like a hot brick. He was actually the jealous and possessive one, but if I’d kicked against it I would have been considered unreasonable. He was a perfectly unreconstructed husband.”

After the success of Lawrence Of Arabia, O’Toole’s behaviour developed into a pattern: while preparing for a movie he was hardworking, moderate and a benevolent presence at home. Once work was completed, he became erratic and unpredictable.

When drunk, he patronised her, calling her “a silly girl”, and when she remonstrated he’d say, “If you don’t like me, leave me alone.” Why did she tolerate it? “I was linked with the most powerful man I’d ever met, whose chauvinism was equalled only by his attractiveness,” she says. “I could no more resist him than stop breathing. But I wasn’t a masochist. When he was sober I knew I was loved – hugely.And he would beg for my forgiveness. There were also practical reasons for staying. What would happen to my mother, who had come to live with us? And by then we had two children.

“I would think twice before depriving them of the kind of life they enjoyed in our Georgian Hampstead home.”

Nevertheless, unable to bear the pain when love and approval were withheld, her resentment grew and she began to reduce her dependence on him. And then came a crisis that reeled her back in.

In 1975 he nearly died from an acute form of pancreatitis caused by his excessive drinking. For weeks he hovered between life and death, but against all the odds pulled through and on returning home insisted on going abroad to recuperate.

Though he could barely walk, they spent an intensely happy time on the Italian Riviera. “I nursed him and began to feel I was indispensable to him,” she says.

“I’d never felt such love for him and thought we were on a different track for the rest of our lives.”

But once back in London, he announced he was going to Mexico to shoot a film and firmly batted away any suggestion that she should accompany him. It was the final straw.

“I couldn’t believe after everything I’d lived through, thinking he was going to die, that we were going back to the same life we’d had before. I thought, ‘I’m not going to do this any more’. When the day came to wave him off, I felt I was saying goodbye to him forever.” But why was he so determined to keep Mexico out of bounds to her?

And then she remembered – before his illness, he’d dumped a pile of unanswered letters on her desk, including one from a girl called Anna who’d written that she’d obviously misunderstood all that had passed and apologised for her presumption. She recalled a Mexican girl called Anna had worked on one of his films.Was it the same girl?

Soon, however, Siân’s own love life took an unexpected turn when a young actor, Robin Sachs, who had a supporting role in a play she was appearing in, asked her out. She was flattered – no one asked Mrs O’Toole out for a drink.

Her daughters were away so she innocently invited him and a friend back home. The companion left and Sachs quickly made his advances. “I couldn’t believe what was happening. I knew I was making a dreadful mistake, but I was surprised by my lack of guilt.” They spent a weekend together and split up when the play ended, but the affair kept reigniting. It was many months before O’Toole, now back in London, realised what was going on. He ordered Siân out of the family home, telling her bewildered mother and their two teenage daughters, Kate and Pat, that she was leaving for “a rest”.

“I knew I’d never see him again. He prided himself on his resolutely unforgiving nature. Much later, I discovered he’d moved the Mexican girl into the house.”

O’Toole dragged the divorce out for two years. “He told me, ‘You mustn’t engage a lawyer. If you do, I will persecute you to the ends of the earth and you’ll never see me again’.” Siân married Sachs in 1979, still numb from her previous marriage.

O’Toole dragged the divorce out for two years. “He told me, ‘You mustn’t engage a lawyer. If you do, I will persecute you to the ends of the earth and you’ll never see me again’.” Siân married Sachs in 1979, still numb from her previous marriage.

“I knew there was no future in it, but Robin hung around persistently. He turned up with a special licence on the day of my divorce. I was too tired to say no, but I should have put my foot down. He was too young to realise what he was getting into – and he wa qu alt wasn’t that smart anyway. We cohabited quite happily for two or three years, although we hardly saw each other, and then the relationship fell apart completely when he met someone else.” Sachs died of a heart attack in 2013, the same year as O’Toole.

News of her first husband’s death on December 14 hit her like an express train and she flew back from Washington DC, where she had been performing, for his funeral. She still feels enormous tenderness for this complex man. And despite her revelations, she left a massive amount out of her memoirs.

“I wanted to protect him. There were things he told me in confidence about his terrible childhood and his bully of a father which might explain his behaviour.” She no longer feels any rancour towards him. “We had our difficulties,” she says with understatement, “but he was also wonderful to me. Once I’d done a show, he was so helpful, wanting to make it better. And he taught me so much. In many ways, he formed me.”

Siân has never remarried, although she’s had offers. “Never again,” she says. She adores her solitary life.

She looked outward after her second divorce, rekindled her career, took up new hobbies and made new friends. She also embarked on a house tour of London, moving every few years.

Along the way, she acquired a new family. She was going abroad for work and looking for a cat sitter. A National Theatre friend volunteered his Israeli boyfriend, Fabi Waisbort (now a well-known osteopath), who needed somewhere quiet to study. When she had another travelling job, she asked the young man if he could stay on.

“Fabi and I looked at each other with bemusement one day and realised we had lived together for 17 years,” she laughs now.

“He and his husband Mark are now among my closest friends and I officiated at their wedding. We no longer live together, but all through the lockdown they did my shopping and checked in on me every day.”

Today she has never felt happier, but she still looks back on her years with Peter O’Toole as among her richest. Was he the love of her life? “Oh, absolutely,” she says.

“And I did feel loved in return,” she adds, her voice quivering with emotion. “Yes, I know I was.”

Siân Phillips: He could be a drunken bully but Peter O’Toole is still the love of my life