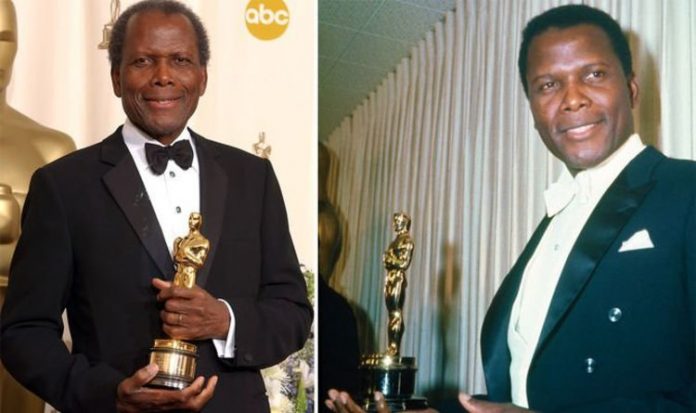 The roar from the audience was palpable and deeply moving when Anne Bancroft announced Poitier had triumphed over Albert Finney, Richard Harris, Rex Harrison and Paul Newman to win the 1964 Best Actor Oscar. History was being made. The actor himself gave a typically elegant and understated speech: “Because it is a long journey to this moment, I am naturally indebted to countless numbers of people…” After listing just a few names, he was clearly overcome with emotion as he grinned broadly and added: “All I can say is a very special thank you.” It was just the start of a lifetime of honours that would include the 2009 Presidential Medal of Freedom and a knighthood from The Queen in 1974.

Poitier came to the US as a troublemaking teen, sent aged 15 from the Bahamas by a family worried about his wild ways. He enlisted in the US army in 1943, aged 16, by lying about his age. The following year, he faked mental health issues to trigger an early discharge.

For the next few years, he tried to start an acting career while sleeping in bus shelters and on pavements and picking up dishwashing jobs. His early attempts to join the American Negro Theatre, which incorporated music and song into many productions, were thwarted by his tone-deafness. However, he applied himself to his craft and increasingly found dramatic roles, until by 1950 he was being offered screen parts.

Unlike, most other minority actors, Poitier began to land unusually layered characters and had his big breakthrough in 1955’s high school drama Blackboard Jungle and then his first Oscar nomination followed in 1958’s Defiant Ones, sharing equal billing and award nominations alongside Tony Curtis.

In 1959, he starred on-screen and was Golden Globe-nominated in Porgy and Bess and on Broadway in the historically groundbreaking A Raisin In The Sun, which introduced white audiences to Black lives in unprecedented fashion. He starred in the film version two years later and garnered another Golden Globe nomination.

His joy at his 1964 Oscar win was tempered by an awareness that Hollywood wanted him to remain in non-threatening ‘appeasing’ roles, especially with regard to audiences in the highly-charged South. Segregation might have legally ended in 1964 but change would come very slowly. At the same time, like many entertainers before and since, Poitier would face backlash from his own community for ‘selling out.

Yet only a few years later Poitier would enjoy his box-office domination of 1967, when he headlined the year’s top three films: To Sir With Love, In The Heat of The Night, and Guess Who’s Coming To Dinner. All were major hits and critically, socially and artistically impactful.

Even though many of the issues of race and representation in the Arts and society are still almost as divisive and problematic today, Poitier had blazed the way for a Black actor to be a commercial and critical success.

However, he was not the first. Two others came before him. Most people know that the very first Black Oscar winner was Hattie McDaniel in 1940 for Gone With The Wind. While Poitier arrived at the Oscars in a limousine and strode through the front doors to take his seat in the main auditorium, special permission had to be requested for McDaniel to even be in the room.

The 1939 Oscars ceremony (held in 1940) took place at the Coconut Grove Restaurant of the Ambassador Hotel and McDaniel was forced to sit at a small separate table in the far corner with her guest and her white agent, William Meiklejohn. Just as she was barred from attending the movie’s main premiere in segregated Georgia, she was also unable to attend the Oscars after-parties, all held in segregated LA clubs.

When McDaniel died of breast cancer in 1952, she left the instructions: “I desire a white casket and a white shroud; white gardenias in my hair and in my hands, together with a white gardenia blanket and a pillow of red roses. I also wish to be buried in the Hollywood Cemetery.”

Her wish was denied by the cemetery’s owner, who believed in segregation. Instead, she was interred in Rosedale Cemetery.

Four years earlier, the first Black male actor had been awarded an Oscar. James Baskett’s performance as Uncle Remus in 1946’s Song of the South remains iconic to this day, although the film and its racial depictions have become deeply problematic. Even at the time, Baskett faced criticism from his own community for accepting stereotyping roles, but there were few others in mainstream Hollywood films.

Although Baskett did not receive a nomination for his work, Walt Disney himself, along with influential Columnist Hedda Hopper, lobbied for an honorary Oscar, which he was awarded in 1948.

Although he was only 44 at the time, the frail and white-haired figure appeared far older as he accepted his statuette from Ingrid Bergman. Suffering from debilitating diabetes, he had a heart attack in 1946 and his health never recovered.  He died from heart failure just four months after accepting his Oscar.

Over 50 years later, Poitier would receive his second Oscar, this time an honorary one, recognising the excellence of his entire career. He, McDaniel and Baskett were pioneers all and their contributions to social justice and change have never been forgotten, but their talent, above all else, shines on still.

Sidney Poitier dead: He changed Hollywood but wasn’t the first Black actor to win an Oscar