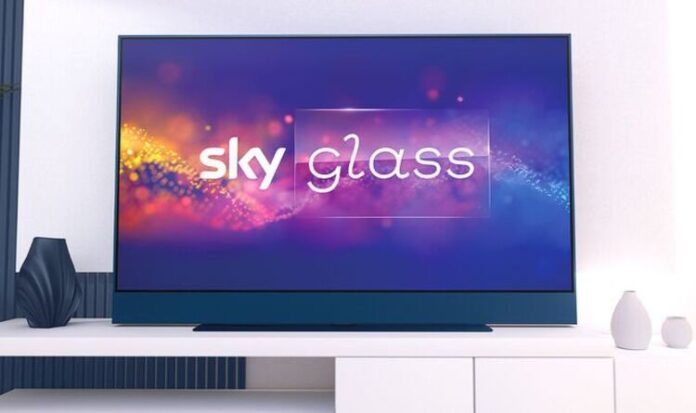 It’s almost six months since Sky unveiled its custom-designed QLED TV, Sky Glass. Since the announcement, the British company has slowly rolled out a number of changes to the television, which is the first Sky product that ditches the satellite dish and streams all live channels over Wi-Fi. But this week, Sky took a very different approach. In a matter of hours, Sky dropped five new changes to its Sky Glass hardware, including some exciting new designs and a picture quality boost for sports fans. Scroll down to find out about the latest changes to this all-in-one telly.

First up, Sky will support High Dynamic Range (HDR) in all coverage of the 2022 Formula 1 season – a first in the history of the motorsport. For those who don’t know, HDR greatly expands the range of contrast so that bright parts of the image can get much brighter. There’s also a wider breadth of colours too, revealing deeper shades of blue, green, red and everything in between. You’ll get a Smart TV that supports HDR to see all of this improvement, with most sets certified with the HDR10, HDR10+ or Dolby Vision standards – so keep an eye out for those terms on the back of the box, or buried deep in the settings menu.

To celebrate the arrival of HDR in all F1 coverage for the new season, Sky has added some new voice commands to Sky Glass. Viewers can use these by holding down the microphone button on the remote and speaking or, if they’ve enabled the feature in settings, ditching the remote and saying “Hello Sky” before the command to use the hands-free functionality only available in Sky Glass. Saying “Hello Sky, Formula 1” will load all of the latest news and analysis from Sky Sports F1, as well as F1 shows, Any Driven Monday and Ted’s Notebook, films and documentaries including Sky Originals Duel: Hamilton v Verstappen and Race to Perfection, and the latest season of Netflix’s iconic behind the scenes docudrama Drive to Survive.

Plus, Sky Sports customers who miss the start of the action can use the Recap feature to catch up on all the key highlights, while keeping one eye on the live race.

Next up, Sky has added a new menu to the home screen on Sky Glass, dubbed the Audio and Music Zone. As the name suggests, this groups together a number of apps, shows and films that centre on music. You’ll be able to find Spotify and YouTube under this new banner, as well as suggested shows from Netflix and Disney+. If you want to listen to your favourite playlists or tracks from Spotify on Sky Glass, the new Party Mode cranks up the volume on the six-speaker array and displays the lyrics on-screen – transforming this clever all-in-one television into a karaoke machine in your living room.

When Sky Glass was unveiled during the central London launch event, the satellite company promised new designs for the speaker fascias to customise the design. At launch, only five colours were available: Anthracite Black, Ocean Blue, Racing Green, Dusty Pink, and Ceramic White. By default, the speaker fascia, which covers the built-in soundbar housed beneath the QLED panel, is colour-matched to the rest of the design. However, for an additional fee, customers were able to pick one of the four other colours to create a contrasting look on the telly. But that’s all changed. Sky has launched a range of new designs on Amazon, including Marble, Jade, Onyx, Sapphire, Quartz and Geometric.

These new designs start from £39.99 for the 43-inch Sky Glass model and can be fitted after-the-fact if you’re starting to tire of the look of your new 4K telly after its initial launch.

Sky has also struck a deal with Apple to offer free access to its streaming service, Apple TV+, for three months on Sky Glass. Apple TV+ was added to Sky Glass at the end of last year, with the streaming service now deeply integrated into the platform. Like Netflix, Prime Video and Disney+, subscribers will see shows from Apple TV+ recommended on the main menu, with suggestions picked based on viewing habits and tastes. Apple TV+ is the home to a number of critically-acclaimed shows, including comedy Ted Lasso and The Morning Show. Apple has also committed billions to bring a wealth of exclusive films to the streaming service too.

From March 18 until May 13, Sky VIP Glass customers can stream Apple TV+ for free for 3 months by signing up to Sky VIP. Not a Sky VIP member? No problem, it’s free to join the membership scheme, which also offers a free Sky Store rental to all new members. Sky VIP unlocks different tiers of rewards based on the length of time that you’ve been a Sky TV subscriber, with those who have been with the satellite company for years enjoying exclusive screenings, giveaways, and other goodies.

And lastly, the final change announced by Sky for its latest telly product, Sky Glass, is the option to subscribe to services like Disney+ directly from the telly. Following the launch of Disney+ in the UK, Sky offered its customers the ability to add a subscription to the streaming service to their existing monthly bill. Rather than keeping track of multiple Direct Debits, this offered simplicity. A similar deal with Netflix had been introduced a few years earlier, before the streaming service was included as standard as part of the entry-level Sky TV bundle. But this update is the first time that Sky customers have been able to add a streaming service to their bills without a call to Sky’s customer service team.

With the new update, Sky Glass owners can simply say “Hello Sky, Get Disney+” to sign up to Disney+ straight from the Sky menu. Enter your card details to pay for your monthly plan and manage your subscription quickly and easily. Sky says that it hopes to add more partners to this system, dubbed the Sky Marketplace, in the near future. Given the support already built into Sky Glass, we’d expect to see similar simply sign-up upgrades for Spotify, Discovery+, Apple TV+ and Prime Video.

MORE LIKE THIS
Best Sky Q and Sky Glass Deals

BT can’t get close to matching this broadband deal but epic...

New Samsung Galaxy A series phones could launch in days with...