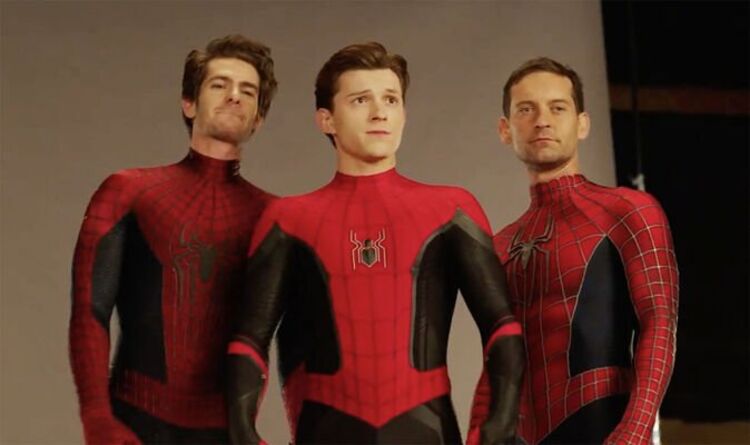 Since hitting cinemas last Christmas, Spider-Man: No Way Home has stormed the box office and now currently stands as the sixth highest-grossing movie of all time with over $1.8 billion made worldwide. Having dominated movie theatres around the world, the biggest Sony movie ever will now soon be available to buy at home. The studio made the announcement today with a hilarious picture of Tom Holland, Tobey Maguire and Andrew Garfield’s Peter Parkers.

Sony Pictures shared an image of their Spider-Man trio standing pointing at each other, referencing a famous cartoon meme.

The captioned post read: “Of course, we got THE meme. #SpiderManNoWayHome swings home on Digital 22 March and on 4K UHD & Blu-ray on 4 April!”

The studio also promised: “Get more Spidey, more villains, and more fun with over 80 minutes of new and behind the scenes content!”

The new trailer also confirmed that this includes 20 minutes more of Maguire and Garfield, hidden Easter eggs and hilarious outtakes and bloopers from the set.

As for outside the US, it’s still unclear, which means the UK could see Spider-Man No Way Home landing on Netflix or BBC iPlayer before Disney+.

Nevertheless, we wouldn’t be surprised if all Sony Spider-Man movies and spin-offs eventually find their way home to the House of Mouse’s streaming service.

Spider-Man: No Way Home is released to buy on digital download from March 22 and on 4K Ultra HD and Blu-ray from April 4. All can be pre-ordered now.

Spider-Man No Way Home digital and Blu-ray home release announced: But what about Disney+?