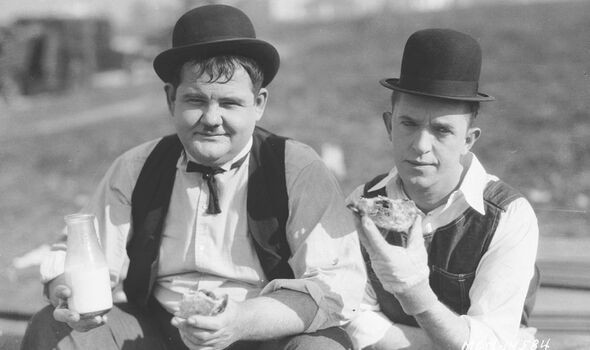 The English comic actor, who died in 1965, was one half of the legendary comedy duo Laurel and Hardy. The two funnymen are portrayed by Steve Coogan and John C Reilly in ‘Stan & Ollie’ on BBC Two tonight. They play the Cumbria-born comedian and his larger-than-life American partner in the latter stages of their career. During this period their fame had started to dwindle, and they eventually severed ties with Hollywood.

But Jon S Baird’s 2018 film about their lives captures them at the height of their pre-war popularity.

It shows how the pair then left the US and went on a tour of Britain’s music halls, a circuit on which Stan had started his career.

Despite leaving audiences in stitches with his and Oliver Hardy’s routines, Stan’s private life was less joyous.

According to author John Connolly, the comedian “regretted” splitting up with his wife as his love life got “complicated”.

In his 2017 ‘He’, Mr Connolly recounts his own take on Stan’s life, based on a wealth of research.

In a section discussing the comic’s turbulent private life, he delves into his split from Mae Dahlberg.

After he parted ways with the Australian actress, he got together with his first wife Lois Neilson.

“It’s worth going back to those early Laurel and Hardy films (many of them can be viewed online) to get an idea of just how handsome Stan Laurel was in his younger days.

“He had very blue eyes, and women seemed to find him irresistible.

“Even as he and Lois, whom he married in 1926, were expecting their first child together, Laurel had already begun an affair with a French actress, Alyce Ardell.

“Laurel and Lois divorced in 1934, a decision he always regretted.”

Before Lois, Stan was enamoured with Mae, who he starred alongside in ‘Wide Open Spaces’ in 1924.

Mr Connolly wrote: “If Hardy’s relationships with women were complex, Stan Laurel’s were so convoluted as to be almost beyond belief.

“In 1919, when he was still Arthur Jefferson, he met an Australian actress, Mae Dahlberg, while working on the vaudeville circuit in the US and Canada.

“Mae claimed to be a widow, despite the fact that her husband Rupert was alive and well, if conveniently elsewhere.

“Mae became Jefferson’s common-law wife. When he changed his name, she styled herself Mae Laurel, although they never married.”

But, according to the writer, there were fears that Mae was holding Stan back in his career and the pair split.

He added: “Mae was older than Laurel, and nowhere near as talented.

“When he moved to Hollywood, she came with him, but by 1925 Laurel was in love with another actress, Lois Neilson.

“When it became clear to everyone that Mae was holding Laurel back both in his career and his love life – to everyone, that is, except Mae – she was paid to disappear.”

‘He’ was written by John Connolly and published by Hodder & Stoughton in 2018. It is available here.