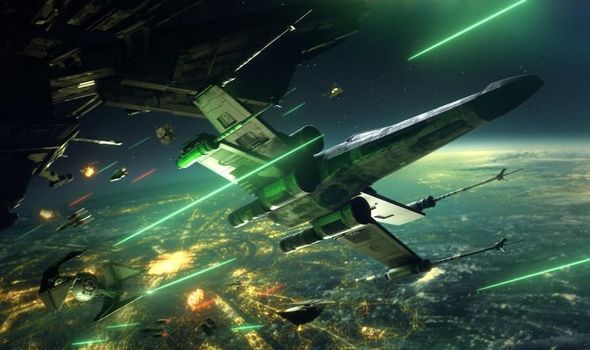 Star Wars Squadrons PS4 and PSVR REVIEW: Is the Force asleep or has it awoken?

It’s fair to say that EA’s handling of the Star Wars license has been less than stellar, or at least it had been until last year‘s Jedi Fallen Order gave fans a new hope.

Here was a proper single-player adventure game without all the money grabbing pay-to-win malarkey that had plagued previous releases like Battlefront 2.

Star Wars Squadrons builds on the goodwill afforded by Jedi Fallen Order, delivering a fresh take on the space battle genre popularised by the likes of Rogue Squadron.

Unlike these classic arcade-style flight games, however, Star Wars Squadrons plays things a little straighter. It’s by no means a full-blown space flight simulation, but there’s definitely more to it than meets the eye.

The action takes place in the first-person perspective, giving players an immersive view of the game’s highly detailed cockpits and everything found within.

And it’s not all for show, because understanding all of the buttons, dials and displays will help you master the game’s combat and your ship’s manoeuvrability.

Similar to games like Star Trek Bridge Crew and FTL, you’ll need to distribute your ship’s power to where it’s needed most.

If you’re flying dangerously close to a Star Destroyer, for example, then it’s probably a good idea to increase your shield power at the expense of your lasers. You can even assign shields to specific parts of your ship.

Got a fighter on your tail? Try powering up your engines to improve your ship’s speed and mobility.

With the ability to quickly and easily prioritise shields, lasers and manoeuvrability, Star Wars Squadrons is a game that constantly keeps players on their toes. This in turn makes you feel more like the quick-thinking galactic fighter pilots you see in the movies.

All-in-all, developer Motive Studios has struck a nice balance between accessibility and depth. The explosive action found within the campaign is instantly gratifying, while the chaotic multiplayer battles require a little more nous.

Let’s begin by talking about the campaign, which is a fun, albeit slightly throwaway means of getting to grips with the game’s various systems and ships.

It mostly takes place in the aftermath of Episode VI, when the New Republic is attempting to restore democracy, while the Imperials do their best to undermine their efforts.

Despite neatly reversing the tried-and-tested Star Wars movie plot, it’s not the most memorable story, although the missions, at least, are fun to play.

Unfortunately, the multiplayer portion of Star Wars Squadrons falls a little short, both in terms of content and entertainment value.

The regular 5-vs-5 Dogfight battles are bags of fun, as both teams strive to reach 30 kills in order to win the game. It’s simple and straightforward, sure, but that doesn’t matter when the matches are so thrilling.

Crucially, Dogfight matches don’t ever drag and outstay their welcome, unlike the larger scale Fleet Battles.

Fleet Battles are also 5-on-5 affairs, only this time the action is more objective based, where the ultimate aim is to destroy your opponent’s capital ship.

The back-and-forth gameplay and addition of AI fighters makes for a much grander experience that’s far more chaotic, but matches typically go on for so long that it ends up feeling like a slog.

Without any other multiplayer game modes to speak of – and with the devs seemingly ruling out future DLC – I’m not convinced by the Star Wars Squadrons’ long-term appeal as a multiplayer shooter.

That’s not to say I won’t be returning, however, because I’m lucky enough to own a PlayStation VR headset, and Thrustmaster flight stick.

Indeed, Star Wars Squadrons is one of the most spectacular VR experiences ever made, and something that you really should go out of your way to try.

With your VR helmet on and flight stick in hand, sitting in the cockpit of an X-Wing and shooting down TIE Fighters is an out of this world experience that truly is the stuff of dreams.

The Force isn’t quite so strong when you’re not strapped into a VR headset, although Star Wars Squadrons still manages to provide enough thrills to escape the clutches of the Dark Side – that’s my way of saying I liked it, in case you’re unfamiliar with Star Wars lingo.

Taylor Swift Disney Plus: When is Folklore: The Long Pond Studio...