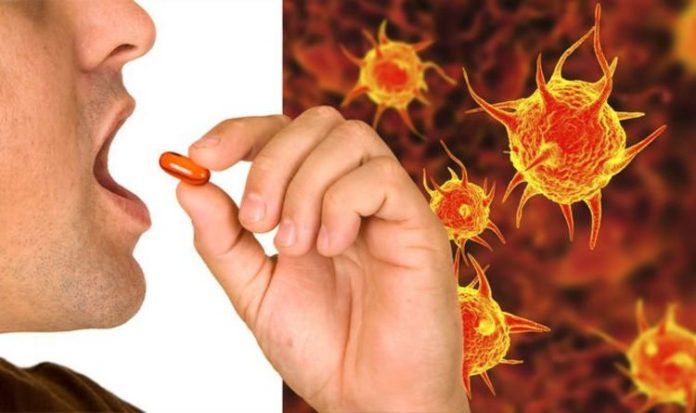 The success of the supplement market is built on the widespread belief that the pills offer a quick-fix approach to health. But researchers worry people are misled by the supposed benefits of supplements, suggesting the dangers may outweigh the benefits. In fact, it’s been proven some dietary supplements may initiate wide-spreading diseases like cancer, or hamper the efficacy of treatment for the disease. What’s more, antioxidants are often consumed in conjunction with cancer treatments such as chemotherapy.

It has long been believed that antioxidants offer protection against the development of cancer because they neutralise reactive oxygen species (ROS), which are notorious for damaging DNA.

In fact, studies have historically associated the presence of antioxidants with reduced free radical damage, one of the hallmarks of cancer development.

Conflicting evidence has come to challenge these findings, however, suggesting that some antioxidants could increase the number, size and stage of cancer tumours.

In one study led by the University of Gothenburg in Sweden, researchers observed these effects after adding antioxidants to the diet of mice with lung cancer.

READ MORE: Cancer: The popular food that increases cancer risk by 20% – ‘definite’ cause of cancer

The findings showed the prognosis of cancer in mice significantly worsened after they adhered to a diet laced with antioxidant supplements.

But further research by the same team revealed a significant connection between antioxidant intake and an increase in the growth of severe malignant melanoma too.

In this case, the tumour size did not grow but researchers found the number of lymph node metastases doubled, meaning it spread more rapidly.

Melanoma is curable when detected early, but can quickly become deadly when it spreads to other parts of the body.

Sean Morrison, of the University of Southwestern Medical Centre, said in a press release: “Administrations of antioxidants to the mice allowed more of the metastasising melanoma cells to survive, increasing metastatic disease burden.”

Further investigation revealed that oxidative stress was at the core of the issue because it interfered with the formation of metastatic tumours.

In other words, treating mice with antioxidants decrease oxidative stress in cancer cells, which in turn boosted its ability to metastasise.

What’s more, it was later revealed that supplementation with antioxidants could hamper cancer treatment, reducing its efficacy.

One body of research published in the Journal of Clinical Oncology bears out these claims, showing the supplements could increase the risk for disease recurrence and death if consumed during chemotherapy.

Christine Ambrosone, chair of the department of cancer prevention and control at Roswell Park Comprehensive Cancer Centre, noted: “Although this is an observational study and the number of users of supplements was fairly small, the results are compelling.

“Vitamin B12, iron and omega-3 fatty acid use was also associated with poorer outcomes.”

The findings are important because antioxidant pills are often marketed as preventive therapies to ward off disease.

The health body adds: “The best way to get your full range of vitamins and minerals is to eat a healthy, balanced diet, with a variety of fruit and vegetables.”

Individuals looking to boost their health with supplements should always talk to a GP first.

Supplements warning: The pill that may ‘initiate’ cancer and ‘accelerate’ tumour growth

Diabetes type 2 warning: Try to not eat past 8pm on...