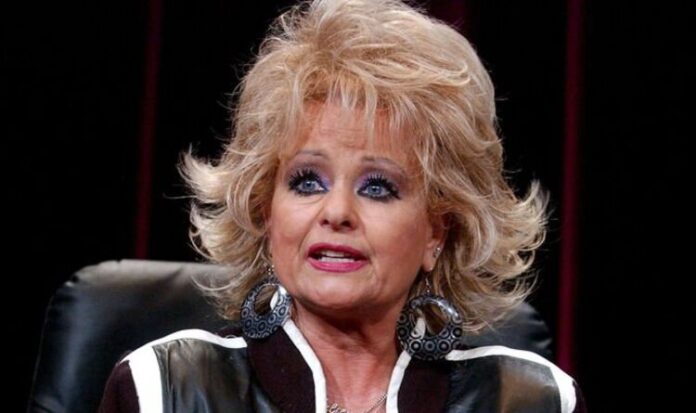 Although Tammy Faye was part of a strict Christian evangelical TV series, The PTL Club (praise the lord), she was extremely forward-thinking for the time. In the 1980s the AIDS crisis was raging, and fear of LGBTQ+ people was rising. In the midst of it all, Tammy invited Steve, a gay Christian minister with AIDS, onto her show, Tammy’s House Party. What followed was a groundbreaking interview that made history in the gay community, and made the star a gay icon.

Steve recently opened up about the day he was invited to be interviewed on Tammy’s show. They first sent him two first-class tickets to fly to Charlotte, North Carolina. But disaster struck at the last minute.

“Their producer called and said: ‘Don’t come – Tammy’s sick. We’re cancelling the interview,'” Steve recalled. “So we were terribly disappointed.” But, oddly enough, things changed back just as fast.

Instead of bringing Steve into the studio, he was patched in through satellite so he could hear everything Tammy said, but couldn’t see her. Tammy, on the other hand, could see and hear him. And her emotions about his condition were real.

Steve said she had this in mind the entire time: “She’d say on air that I was having chemotherapy and that I was being interviewed from Los Angeles because the journey would be ‘too hard on me.’ I think she thought this was true, maybe.” (Via National Geographic)

But, in reality, Steve learned that Tammy was actually protecting the minister from prejudices within the studio.

READ MORE: The Eyes Of Tammy Faye: Script lets down this rags-to-riches tale

Steve revealed: “What I heard later was that they were afraid that I might not be treated well, that the camera crew wouldn’t work if I was in the studio.”

He also explained how Tammy was just as kind during the entirety of their discussion. Steve said: “I got to chat to Tammy for about three minutes before the interview started … And when we said hello, she fell all over herself to thank me for being courageous enough to come on her program. And she assured me this was not going to be a program where they were going to talk about Jesus. But then she started talking about Jesus, so I joined right in.”

He added: “She was just so sweet, and so sincere, and compassionate in those three minutes before the interview began all of my worries vanished.”

Steve’s interview was even used in the feature film, The Eyes of Tammy Faye.

The Eyes of Tammy Faye hit cinemas last month and has Jessica Chastain as the titular character.

Steve said of his contribution to the film: “I think my interview was really well-used in the film. I might have chosen different passages from it, but I think they chose the right ones. They did quote me directly in the film: I said: ‘Jesus loves me just the way I am, Jesus loves the way I love.'”

In the film, Spider-Man actor Andrew Garfield plays Tammy’s husband, Jim Bakker. And he recently explained he was intrigued by the ambiguous morality of the real-life character.

Andrew said: “I’m definitely morbidly fascinated by the psyche of a person who can look down the barrel of a lens, live on TV, and say, ‘God will only love you if you give us your money.'”

Andrew said the pastor “misinterpreted the word ‘prosperity’ in the Bible”. He continued: “From the original Greek, it meant spiritual prosperity, which, as we know, is kind of the antithesis of material prosperity. But he just happened to miss that little detail – and created an empire and a whole movement based on the idea that God wants us to be rich and have nice things.”

Tammy died on July 20, 2007, after suffering from colon cancer for ten years. During this time she appeared at Gay Pride marches and maintained herself as a pillar of the gay community. In her final interview with Larry King, she said: “When we lost everything, it was the gay people that came to my rescue, and I will always love them for that.”

The Eyes of Tammy Faye hits Disney Plus on March 23.