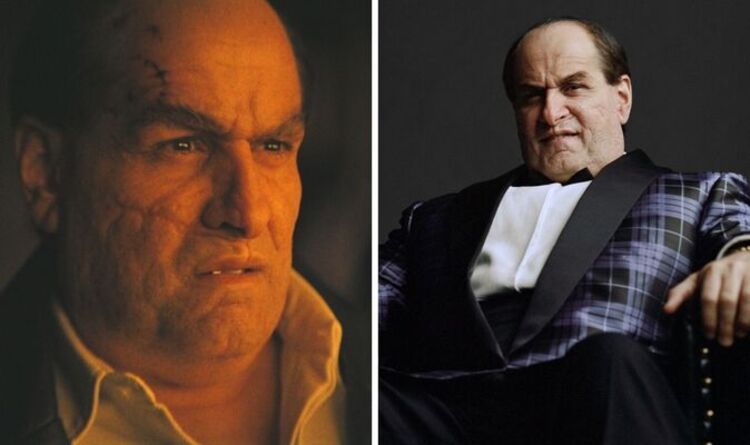 The Batman’s release date is just around the corner on March 4. The stars have been sharing countless stories on set, with director Matt Reeves even teasing the sequel already. One of the biggest shocks from the trailers has been Farrell’s dramatic transformation into the Penguin. One of the Dark Knight’s oldest and most iconic villains, he is known for his small height, large width, limp and short temper. However, he is also known for cackling at his enemies through gritted teeth laden with fat cigars. And, despite fighting for its inclusion, Farrell was denied the opportunity to bring that to the big screen.

And that wasn’t the only thing missing from Penguin’s attire.

Penguin was also missing his top hat and monocle, attire he has been sporting for over 50 years in the comics.

Farrel recently spoke about these changes, saying: “Big studios make big decisions around such things as the presence of cigarettes in films. I fought valiantly for a cigar. At one stage I said: ‘I can have it unlit! Just let me have it unlit.’ They were like: ‘No.’ [As if] a bunch of 12-year-olds are going to start smoking Cuban cigars because [the Penguin is smoking cigars in a movie.]” (Via Variety)

It’s a move that isn’t too surprising, as in recent years Hollywood has been continually moving away from featuring smoking of any kind. Disney has had a ban on smoking in its films since 2007 and extended it to Lucasfilm, Marvel and Pixar in 2015. It meant the recent Cruella starring Emma Stone had to forgo the character’s signature smoking as well.

At the time Stone noted she did “not want to promote smoking”.

READ MORE: Elvis Presley was ‘afraid his light would go out’ before tragic death

Stone said at the time: “That is not allowed in 2021. We are not allowed to smoke onscreen in a Disney film. It was difficult to not have that cigarette holder… I was so excited to have that green plume of smoke in there, but it was not possible. I don’t want to promote smoking, but I’m also not trying to promote skinning puppies.” (Via The New York Times).

However, it should be noted that Warner Brothers, the studio behind The Batman does not have a ban like Disney’s mandate.

In fact, audiences will recall 2019’s Joker starring Joaquin Phoenix was had a cigarette in his mount at almost all times.

That film was R-rated though, while The Batman is only PG-13 – one of the few bigger changes being made to the franchise.

Despite the fact Penguin is missing his main vice, audiences will be getting a lot more of the Penguin as production on his HBO Max TV series is about to get into full swing. The plot is being kept under wraps, but the star shared some details while speaking to Entertainment Tonight.

Farrell said: “We have to get into what made him the man he is. And also, it will pick up where this film finished off I think. I think it’ll pick up a little short time after the last frame of this film. We’ll get to go on a little kind of left turn off to the world of Oz and how he’s beginning to kind of dream of filling a potential power vacuum that may exist.

“It’s a lovely, lovely character, and explores vulnerabilities. His violence is apparent, his propensity for violence and his ability to use it as a tool is apparent, but [also] to see we all have soft spots. Every single person. And to be able to find that location, dig around it would be fun.”

Penguin isn’t the only character getting a new look and feel in The Batman.

Alfred Pennyworth star Andy Serkis has recently revealed he’ll be taking on a more literal father-figure role in the movie.

He said: “Our relationship tends to revolve around personal matters, a lot of conversations about fatherhood. That is very much a part of what we were exploring with our version of Alfred. It was a truth that we both kind of understand.”

The Batman will premiere in cinemas on March 4.