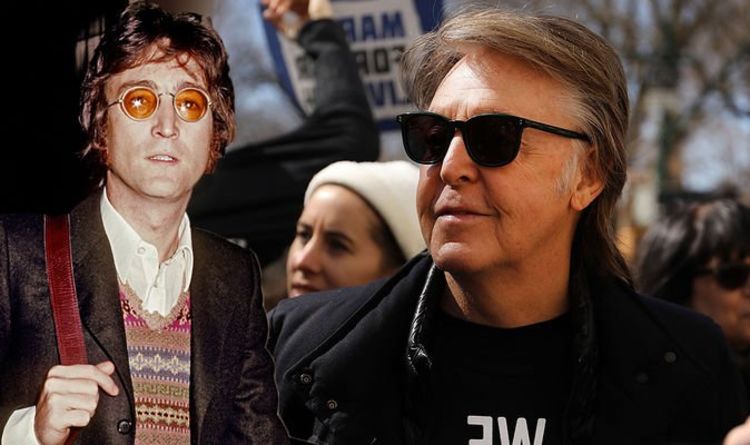 The Beatles: John Lennon was ‘INSECURE’ about his singing voice

The Beatles split up back in 1970, bringing the biggest band in the world to an end. Just ten years later one of the band’s key members, John Lennon, was murdered by Mark David Chapman in New York. To commemorate what would have been John’s 80th birthday, fellow Beatle Paul McCartney sat down with Lennon’s son Sean on BBC Radio 2 to talk about the legacy his father left behind.

During the interview the pair spoke in detail about John’s life, his early work in The Beatles, and indeed his relationships with other artists at the time.

However Sean was eager to speak about some of his father’s lesser-known qualities.

One of these was that John was actually a little insecure about aspects of his voice when recording music.

Sean asked Paul: “I also heard that he was insecure about his voice, like I’ve heard that when he was doing the solo records he would turn his vocal down and then he’d go to the bathroom and come back and that engineers would have like snuck it back up.”

READ MORE: The Beatles: ‘NONE of us were musicians’ – McCartney details John Lennon’s inexperience

Sean continued: “It’s just funny that he had these sort of insecurities, although he also came across as very confident, didn’t he?”

Paul responded: “Yeah, exactly. Well, the confidence was the shield.

“I’d learned that early on was that if you have difficulties in your life it can kind of go two ways. You can just lie down and give up or you can put a shield up and you can guard yourself from the world in that way.

“So from the minute I met John I knew that was what was going on, that he had this wit that would guard him from that.”

Going on to talk about his own insecurities, Paul added: “The thing is, you know, insecurities, I think so many people, I can’t think of anyone who doesn’t have insecurities, so I can relate to that.

“And I’m sure John would not think it was great enough. I remember doing a vocal on Eleanor Rigby and saying to George Martin, ‘God, this is terrible, oh I’m terrible.’

Later in the interview Sean and Paul also spoke about The Beatles’ split.

Specifically, the pair discussed whether the band members truly disliked each other when everything came to an end.

Talking about the Let It Be documentary, Sean asked: “You know growing up there was always this myth that things were a bit grumpy, or whatever, and there was this mythos around the film and everything.

“It’s very light hearted, you guys are joking around and enjoying yourselves, I think – is that true? Do you think it was a bit of a myth?

“And that looking back, do you feel like, do you notice how much more fun it seemed or something, because I remember seeing in an interview with you saying.”

Paul replied: “I think it was the fact that The Beatles were breaking up which was a very difficult time for us. It was like a divorce.

“So it’s very difficult to collect your thoughts and to just be jolly. And by the time Let It Be came about, that became the story of the film.

“And then that, coupled with the fact that we’d broken up, left a gloomy left a sort of cloud in the room.”

John Lennon at 80 is available on BBC Radio 2 on BBC Sounds.

Michael Jackson son: When was Prince Jackson born? Is he the...