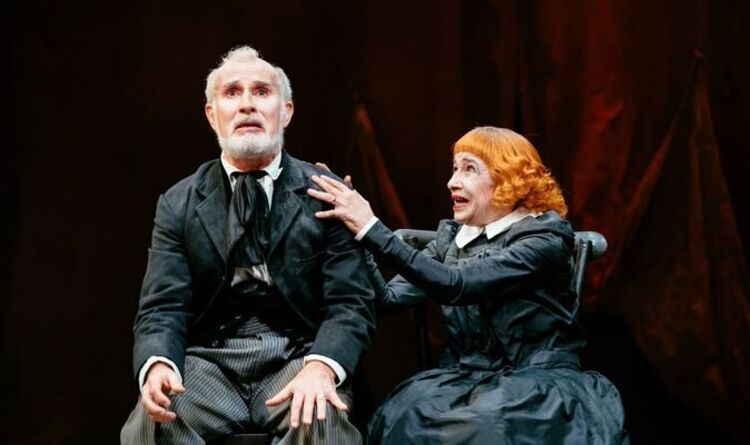 Premiered in Paris in 1952, The Chairs hasn’t been seen on a UK stage for 25 years and this version – translated, remodelled and directed by Omar Elerian – keeps faith with the author’s intentions while giving it a fresh coat of paint.

On a stage hung with curtains an old man and an old woman dressed in fustian clothes of comic formality sit on chairs like ancient children in an abandoned theatre.

They are waiting for an audience to arrive for their invited ‘Speaker’ who will deliver a lecture that may have something to do with the catastrophe that has laid waste the world outside. The man is nervous, his wife wide-eyed with anticipation as they greet their non-existent guests bringing in more chairs to accommodate them.

The real life husband and wife team of Kathryn Hunter and Marcello Magni are the perfect duo; rushing around while conversing with invisible people and occasionally the audience in a display of physical theatre that combines panto with the commedia dell’arte tradition on which it is based.

A stagehand (Toby Sedgwick) makes random appearances, handing props through the curtains until eventually emerging in another role at the conclusion.

The playful mood and comic antics take a darker turn as the play advances with the couples’ differing memories of a child they may have (or may not have) lost.

The additional monologue composed by Elerian is true both to Ionesco as well as Pirandello as Sedgwick attempts to elucidate the playwright’s concept like a second rate magician attempting to explain why his trick went wrong.

Ionesco’s plays are not for everyone but in an increasingly topsy-turvy world it may be that their time has come again.