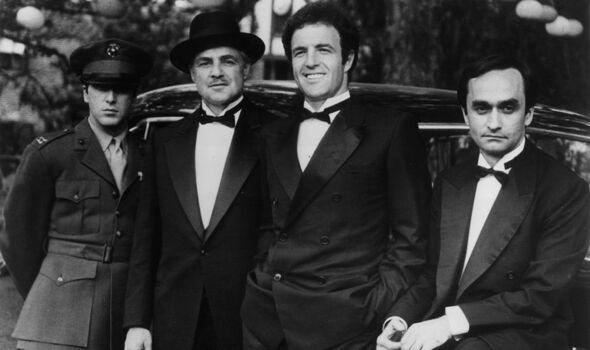 In a hail of bullets, sex and violence set to the strains of symphonic violins, The Godfather roared into cinemas with guns blazing 50 years ago. The definitive gangster movie, widely considered one of the greatest films of all time, it changed Hollywood forever, launching the era of blockbuster “event” movies and becoming a cultural icon.

Today The Godfather returns to British cinemas, along with 50th anniversary box sets, a book and posters, in anticipation of its half-century next month.

Hailed as an instant classic, the epic story of the Corleone family’s rise from New York Italian immigrants to criminal conglomerate was an offer audiences worldwide couldn’t refuse.

Nominated for 11 Oscars, The Godfather won three including Best Picture, and Best Actor for its star, Marlon Brando. The screenplay’s best-known lines have passed into our cultural lexicon.

“The Godfather was a critical and commercial hit when it opened in March 1972,” says Prof Kevin Sandler, who teaches a class on the movie at Arizona State University.

“It soon supplanted The Sound Of Music as the highest-grossing film of all time.

“The Godfather’s impact cannot be underestimated.”

“The Godfather: Part II”, directed by Francis Ford Coppola, based on the novel ‘The Godfather’ by Ma (Image: Paramount Pictures/CBS/Getty Images))

Behind its cacophony of gunfire is a family drama based on Mario Puzo’s bestselling novel about the dark side of the American Dream, romanticising the Mafia by humanising the inner life of mobsters with moral ambiguity.

“It made Italians seem more like fully-realised people and not stereotypes,” wrote Tom Santopietro in his 2012 analysis The Godfather Effect. “It helped Italianise American culture.”

The movie transformed not only the way we view the Mafia and Italian-Americans, but also inspired pride in Americans of all backgrounds.

The Godfather’s epic story had it all: engrossing characters, great acting, innovative film-making, emotional power and a cavalcade of awards. It influenced hundreds of successors in film and TV, including Goodfellas, The Sopranos and Breaking Bad.

Yet The Godfather would have been a very different, and perhaps forgettable film, if Paramount Pictures had its way.

The studio loathed the actors and director, the low-key shadowy cinematography, the music and the setting.

Brando was coming off a series of movie flops, with the reputation of an unreliable trouble-maker on set. The studio hoped instead to cast Laurence Olivier, Ernest Borgnine, Orson Welles or Anthony Quinn in the title role.

“Marlon Brando will never appear in this motion picture!” Paramount’s president told Coppola. “And I forbid you to bring it up again.” Yet Coppola begged, and the studio finally relented – as long as Brando did a screen test, performed for free, and put up a $1million bond in case his misbehaviour caused costly delays.

Brando’s screen test was so convincing that they even paid him, but only the union minimum “scale” rate, “which was an insult,” admits Coppola.

The studio came to hate Coppola too, plotting to replace the slow and indecisive director with veteran Elia Kazan. “I was young and had no power,” says Coppola. “It was just the most frightening and depressing experience I think I’ve ever had.”

The studio wanted to change the film’s setting from the 1940s to the 1970s to avoid paying for costly vintage cars, sets and period costumes.

They even hated Nino Rota’s score dominated by a plaintive lone trumpet, which went on to win huge acclaim.

But Coppola stuck to his guns (and knives and garrottes) and made movie history. Many of the film’s lines are indelible.

“I’m gonna make him an offer he can’t refuse.”

“Leave the gun, take the cannoli.” (The final words were improvised by actor Richard Castellano, making murder seem as commonplace as shopping for pastry.)

“Revenge is a dish that tastes best when it is cold.” (It had been said before, but was immortalised by The Godfather).

“Luca Brasi sleeps with the fishes.” (Delivered again by Castellano, after a rival mob sends a dead fish to indicate hitman Brasi has been killed and dumped in the river.)

“It’s all-out war: we go to the mattresses.” (An ancient Italian reference to fortifying castle walls with mattresses to deflect cannon-fire, popularised by The Godfather.)

Many of the film’s images are equally unforgettable.

A decapitated horse’s head left bleeding in a film director’s bed, in a bid to persuade him to cast Sinatra-like crooner Johnny Fontana in a new movie, delivered a shocking visceral blow.

The film-makers used a real horse’s head, borrowed from a slaughterhouse. The machine-gun massacre of Don Corleone’s beloved heir Sonny, Luca Brasi’s eye-bulging strangulation, and Victor Stracci’s shotgun assassination are among more than 20 memorable murders in the film. As the first blockbuster must-see event movie, The Godfather changed Hollywood forever, paving the way for Jaws, E.T. – The Extraterrestrial, Star Wars and Titanic. “The film restored Hollywood’s faith in the mass appeal of a big-budget feature,” says Prof Sandler.

Yet for Coppola, The Godfather became an albatross around his neck.

“That film ruined me,” he says. “It was so successful that everything I did was compared to it.”

It spawned The Godfather: Part Two, acknowledged as one of the greatest sequels of all time: a rare follow-up that also won the Best Picture Oscar, and earned Best Director honours for Coppola.

But 1990’s Part Three was doomed by impossibly high expectations and faint praise.

The Godfather not only transformed the way the world viewed the Mafia, but also the way gangsters viewed themselves. It became the mob’s best recruitment film, almost an instruction manual.

FBI agents revealed that they repeatedly found video copies of The Godfather at mob homes they raided. Wiretaps noted gangsters using lines from the film. One Italian mob left a severed donkey’s head as a warning to a baker reluctant to pay protection money.

Mafia muscle also gave the mob a surprising voice in the film’s creation, and New York’s Colombo crime family insisted that Coppola cut all mention of “Mafia” from the movie.

Ironically, Colombo himself was shot in the head in New York while Coppola was filming The Godfather just four blocks away in 1971. Genuine gangsters visited the set to meet the cast.

When mob enforcer Lenny Montana visited the set he was hired to play killer Luca Brasi. “Without the Mafia’s help, it would’ve been impossible to make the picture,” confessed Ruddy.

Half a century later, The Godfather remains as gripping today as it ever was.

Francis Ford Coppola’s beautifully composed frames and Nino Rota’s masterful score have been cleaned up to celebrate the 50th anniversary of the mafia classic.

But for fans who spent the last five decades watching the film on VHS and DVD, the main attraction is to witness the epic drama on the big screen.

A pre-shouty Al Pacino sparkles as anti-hero Michael Corleone, dragged into the family business by the shooting of his father (Marlon Brando).

The even better Godfather II and the disappointing Godfather III (pointlessly renamed Coda: The Death Of Michael Corleone) are in cinemas next week and the week after.

The Godfather was an offering film bosses tried to refuse