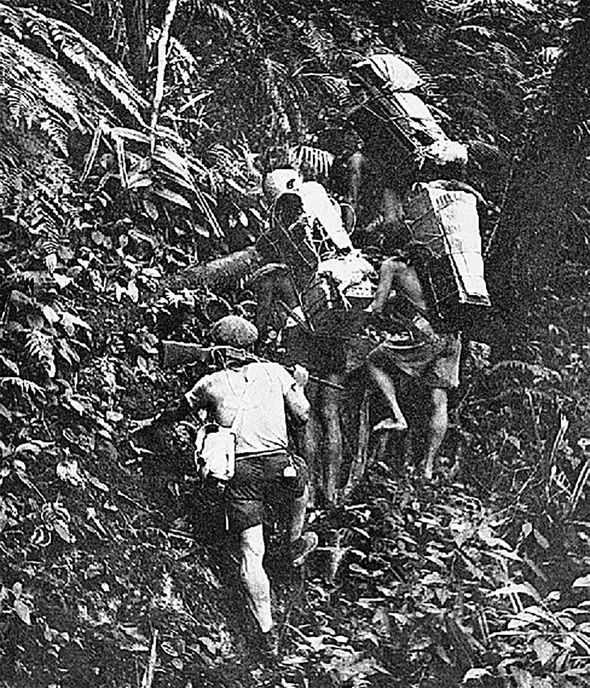 Australian troops watch as Japanese coastal positions are bombarded ahead of May 1945 landings (Image: PA)

Inside each plane, four men were waiting nervously. Conditions were far from ideal for a parachute jump: if they landed in the trees they could be seriously injured or even killed. Even more worrying, though, was the uncertainty of what – or rather who – awaited them below.

It was March 25, 1945, and these men were on a secret mission, codenamed Semut – the Malay word for “ant” – to join up with the indigenous tribes of Borneo, enlist them to the Allied cause and engage them in a guerrilla war against the Japanese.

They had been recruited and trained by Z Special Unit, part of the secretive SRD (Services Reconnaissance Department), a cover name for SOA – Special Operations Australia. SOA, like its British equivalent, the SOE or Special Operations Executive, had been formed for intelligence-gathering, sabotage and guerrilla warfare behind enemy lines.

This first party – others would follow – was led by Tom Harrisson, a Harrow and Oxford-educated anthropologist. Its success would depend on recruiting the Dayaks, as the indigenous peoples of Borneo were collectively known.

But what sort of reception would they receive when they landed?

Would the tribes they met be willing to join their cause, or would they be hostile? While Harrisson had been to Borneo before, most of the soldiers had not.

All they knew about it was that many of the tribes in Sarawak, the territory into which they were dropping, had practised headhunting until recently.Their longhouses were festooned with collections of smoked heads, leering down from the rafters.

The British administration that had ruled Sarawak for a century had largely stamped out headhunting, but not entirely. Many Dayak warriors remained nostalgic for the practice of taking heads and it was still a badge of honour and manhood.

The Semut men had been given cyanide suicide lozenges, some even put them in their mouths before they jumped. In the words of one operative, Australian Bob Long: “It was like the frying pan and the fire. If the Japs didn’t get you the Dayaks might. It was hard to know which to be more worried about.”

This clandestine guerrilla war in the dense Borneo jungle is one of the few largely untold stories left from World War Two, partly because those involved were sworn to secrecy for 30 years.

There are a few accounts, but the full story has remained elusive.

Now, at last, it is revealed in a brilliant new book – Semut – by Australia-based anthropologist and Borneo expert Professor Christine Helliwell who pieced together a truly incredible tale involving headhunting, blowpipes and poison darts – and a brotherhood forged between men of different cultures, uniting against a brutal invader.

The island of Borneo had been under occupation since December 1941 when the Japanese swept through Southeast Asia, seizing British and Dutch colonies.

The loss of Singapore in February 1942 had been a particularly humiliating defeat, but by 1945 the tide had turned. With the Allies heading for victory in Europe, the battle to evict the Japanese from their newlyacquired empire in Southeast Asia had begun gaining ground.

The British-led Fourteenth Army was advancing through Burma, while the Americans were retaking the Philippines. Meanwhile, plans were being made for Australian forces to liberate Borneo.

But before they could land, it was essential to discover the Japanese strength and positions and sow chaos among them, just as SOE had in France before D-Day.

The men charged with creating this mayhem would need to be tough to survive months in the dense Borneo jungle, where vicious thorns tore at clothing and flesh, and be able to scale vertiginous rocky outcrops, wade through leech-infested swamps, and battle malaria, dengue fever, dysentery, and skin infections that rotted flesh to the bone.

When the Japanese invaded Sarawak, the tiny British and Indian garrison had been forced to retreat. Some escaped, others were captured, along with civilian administrators, and were now starving and dying in internment camps. A group of European soldiers, civilians and families found sanctuary in a longhouse deep in the jungle, but the Japanese tracked them down and, over several weeks in August and September 1942, killed 41 Europeans, having first raped the women and forced them to watch as their children were slaughtered.

The Malay and Dayak inhabitants of Borneo had little choice but to accept Japanese rule. But despite their talk of an Asian brotherhood, the Japanese occupiers treated them with contempt and sometimes brutality, seizing crops and livestock.

So by 1945, many were eager to help evict their oppressors.

When Tom Harrisson and his seven companions jumped from the Liberators and landed in the swamp in March 1945, they spotted a small man with flowing black hair and a loincloth.

He was holding a long blowpipe (used by the Dayaks for hunting with darts).Attached to its end was a piece of white fabric. In their relief at this sign of peace, they stepped forward and offered the man a cigarette.

After a shared smoke, they were led to the nearby longhouse to meet his chief. In fact, the white cloth had been a sign of respect: the Kelabits (the local Dayak tribe), spotting the strange apparition of white men floating from the sky with their curious white umbrellas, had believed them spirit beings who should be welcomed.

The Semut team had been instructed to behave courteously towards Dayaks, who were generally easy-going and hospitable, but disliked arrogance. “There must be no attempt at browbeating,” they were told.

Both SOA in Australia and SOE in Britain had scoured their respective armed forces for anyone with experience of Sarawak to join the operations.

As well as Harrisson, they recruited Toby Carter, a New Zealander who had worked in Sarawak’s oilfields, and portly Bill Sochon, an Englishman who had previously worked in the Britishrun Sarawak justice service.

Another Semut member who joined later was John Fisher, my great uncle who, as an administrator in pre-war Sarawak, was well-liked by the Dayaks and spoke several of their languages. Fisher, Harrisson and Sochon were all trained at SOE centres in Britain in unarmed combat, sabotage, wireless coding and transmission, and the art of killing silently, Harrisson explained to the Kelabit chief that they had come to fight the Japanese: would he and his men be willing to help?

They would, he added, be given firearms and, the clinching factor, would be allowed to take heads – Japanese ones – for which they would be paid a bounty.

Thrilled by the idea of returning to the days of headhunting and warfare, the chief enthusiastically committed himself and his people to the cause.

As Harrisson wrote: “The idea that white men might actually sanction a return to arms for murderous purposes seemed almost as marvellous as the parachutes of our appearance.” As word spread, there was a they never Dayak comrades’ rush to enlist. Eventually more than 2,000 local guerrillas were trained and armed.

The alliance between the men from the sky and the Dayaks was cemented that first night, as on many subsequent occasions, with feasting, dancing, and copious quantities of borak – rice wine.

The Semuts became used to fighting while horribly hungover.

They ran medical clinics (each team had a medic, including one Harley Street surgeon), donated parachute silk for clothing – cloth, along with food, was in short supply under Japanese rule – and distributed weapons.

On April 16, a second party of operatives was dropped.

The Semuts divided into three, and later four, teams: Semut I commanded by Tom Harrisson, Semut II by Toby Carter, and Semut III by Bill Sochon, each team responsible for their own sector of Sarawak.

At first the Semuts concentrated on intelligence-gathering and did not encounter many Japanese, who tended to stay close to the coastal regions. But when the Australian la 1 landings began on June 10, 1945, the Semuts moved to cut Jack odain off any retreat inland, and deny food and supplies, ambushing patrols and attacking isolated Japanese outposts.

For this, the Semuts relied heavily on their Dayak allies, not simply for food and shelter. The Dayaks knew where edible vegetation grew, where it was safe to bathe in the river and where crocodiles lurked, and could even predict the weather.

The operatives’ maps were often inaccurate but the Dayaks knew the topography of the jungle and could advise where to lay ambushes. “They were master tacticians,” remembered one operative admiringly. Accordingly, the Semuts spread word among the tribes that any Japanese who entered their territories should be killed.

Despite savage reprisals, more and more Dayaks flocked to join the Semuts, or initiated their own attacks.

One tactic was to offer to carry the Japanese soldiers’ weapons as they crossed a river, then turn on them, hacking off their heads with their sharp parangs (swords).

Another was to invite a Japanese patrol for a meal and ply them with borak then pounce when they were insensible.

Soon, as Bill Sochon recalled, “A fresh bunch of heads would dangle like oversize, rotten grapes” from the longhouse roof.

Sochon witnessed the return of a Dayak after a successful ambush.

“In his right hand he carried his long parang, the blade ominously stained dark, and in his left, held by one ear, the clearly recognisable head of a Japanese,” he recalled. More followed: “Each carrying his gory trophy and screaming an exuberant war cry”.

In his former role, Sochon had spent nine years trying to stamp out headhunting.

Now, ironically, he was obliged to encourage. He even had to attend ceremonies to honour the heads by feeding them delicacies, then smoking them for preservation, producing a stomach-turning smell.

The Semut operations were viewed with suspicion by regular forces, but they were hugely successful.

In Semut III’s territory alone, more than 265 Japanese were killed and 25,000 square miles of territory taken from the Japanese. Supplies were cut off and the enemy’s morale broken.

The Japanese surrender on August 15 did not immediately bring peace to Borneo: many Japanese units retreated further into the jungle.

The Semut teams pursued them, harrying and cutting them off until the last Japanese unit finally surrendered on October 30, 1945. (The survivors of one Japanese unit were found, several years later, still hiding out in jungle caves).

By the time the Semuts left Borneo, many were unrecognisable, several stone lighter and wearing sarongs rather than uniforms. For some, leaving the jungle was a relief, for others a wrench.

But they never forgot their Dayak comrades-in-arms. In the words of Semut veteran Sergeant Jack Tredrea: “None of us would have survived more than a day or two without them.”

The headhunters who went to war for the Allies