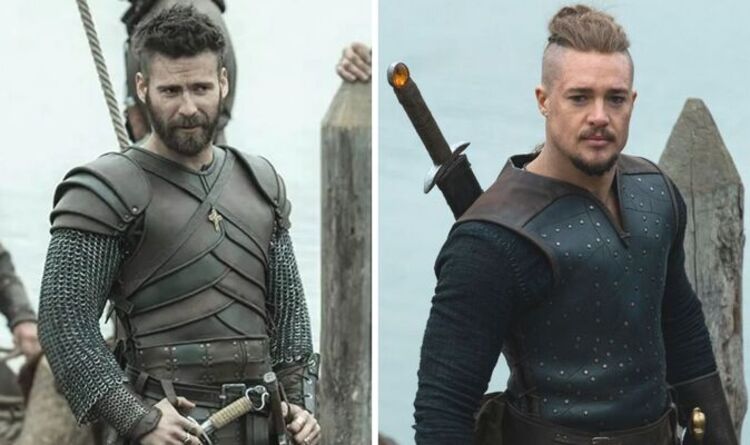 The Last Kingdom will finally be returning to Netflix for its fifth and final season after premiering its season four finale in April 2020. Ahead of its release Finan star Mark Rowley opened up about the behind-the-scenes of the series and paid tribute to Alexander Dreymon, who directed an episode.

The series is the onscreen adaptation of a novel series of the same name by Bernard Cornwell and, although there are 13 books, the show will end at season five.

With the fifth and final instalment filmed and expected for release this month, actor Mark Rowley, who starred as Finan, paid a touching tribute to his co-star Alexander Dreymon.

Dreymon, who became the face of the series, extended his skills to behind the camera and directed the second episode.

READ MORE: The Rookie faces backlash as viewers complain over change to series

“It really was something great. He would give fantastic notes, he knows all the characters so well that he can give really accurate and subtle notes as well.

“So, when you’re working with him, he’ll give you something and it’ll bring a different energy shift into the scene.

“He would sometimes be doing a scene with you, and he would be thinking as the actor and the director at the same time.”

Rowley continued: “He would have the monitor there, and he’s looking at the shot as well,” the actor remarked, “honestly, I think he’s some sort of robot, he is a superhuman and a fantastic guy.”

Dreymon played the show’s lead character, Uhtred of Bebbanbur who was born into status as the son of Ealdorman Uhtred, Lord of Bebbanburg (Matthew Macfadyen).

His father and other Saxon men of Northumbria were killed in the battle against the Danes with only his uncle Aelfric (Joseph Millson) and stepmother Gytha of Bebbanburg (Peri Baumeister) surviving.

Uhtred was taken as a slave and after many years he was able to escape into the woods during a fire.

The Last Kingdom followed Uhtred on his journey to reclaim Bebbanburg from his uncle, who wanted him killed.

Throughout the series, his loyalties were constantly tested as he was often forced to choose between the kingdom of his ancestors and the people who raised him.

Actor Dreymon opened up about directing episode two and disclosed: “First of all, I’m just hugely grateful to Carnival for giving me that opportunity and for placing their trust in me.

“It’s a huge production with a lot of moving parts, very technical aspects and I spent as much time in front of the camera as I did behind the camera, so I was definitely thrown in at the deep end but I’m completely in love with it, I’m just so grateful to have been able to do it.”

The actor turned director continued: “There’s just no way of knowing the breadth of the director’s responsibilities and what it means to carry the weight of that unless you do it.

“I thought I knew, but I really had no idea. It gave me even more honour and respect for that part of our world.

“It made me want to help the directors that I’m working with even more than before. To get them to be able to do their job because they have so much to take care of.”

Dreymon concluded: “I think in the future in any way that I can take weight off of their shoulders in a productive way, in my role as an actor, I’ll endeavour to do.”

The Last Kingdom season 5 will premiere on Netflix on Wednesday, March 9.