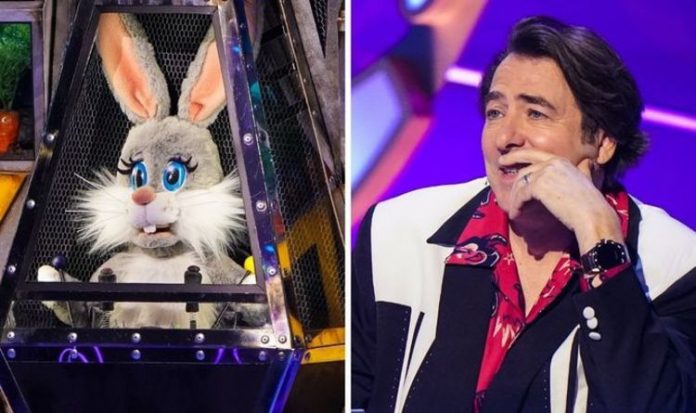 ITV viewers tuned in to watch the latest instalment of The Masked Singer on Saturday evening to see which celebrities disguised in outrageous costumes would make it through to the next round of the singing competition. The last mystery contestant to perform was Robobunny who stunned the judging panel with their impressive vocal range. While the judges were left baffled as to who was behind the extravagant disguise, fans of the show suspected it was a certain Irish boyband member.

Mushroom, Firework, Doughnuts, Lionfish and Robobunny all took to the stage on Saturday to perform a rendition of well-loved songs for Movie Week.

Robobunny was the last contestant to sing in front of the judges and they opted to sing Shallow from the hit film A Star Is Born which was originally performed by Oscar-winner Lady Gaga and Bradley Cooper.

Throughout the performance, Robobunny sang in a variety of different octaves in a bid to throw the judges of the scent.

Parts of the song were performed in a comical high-pitched manner, while others were sung deeply with great power.

The judges were left amazed by the notes which Robobunny hit throughout the rendition, but they thought that two celebrities could be hiding in the costume as the vocal range was so extreme.

However, fans were convinced there was one person behind the mask and many thought it could be Mark Feehily from Westlife.

@OrganeDecemMan tweeted: “Robobunny is definitely Mark Feehily from Westlife for sure and I hope he wins it all this season.”

Jessie J commented: “Robobunny is 100 per cent Mark Feehily, his voice just blows me away… He forgets to disguise his voice too haha.”

Charlotte said: “I’ve had a big think and a proper listen. Originally [I] was going with Sisqo, but now… If Robobunny isn’t Mark Feehily then my entire late teens and early twenties was a lie and I’ll never get over it.”

Robobunny’s videotape on The Masked Singer was full of country clues, which could be a nod to the fact Mark now lives on a ranch.

However, there were a number of Steps-themed references in the clip including ‘5,6,7,8’ but that could well be a trick to throw fans off track.

After all five acts finished their performances, host Joel Dommett announced who would be making it through to the next round of the competition.

Robobunny, Mushroom and Doughnuts were all successful and will return to the stage in upcoming episodes.

Lionfish and Firework, on the other hand, had to battle it out to keep their spot on the ITV show.

Sadly, Lionfish was the character who got the boot, and the celebrity behind the mask was Pop Idol winner Will Young.

The Masked Singer continues on ITV on Saturday at 7pm.